After a mad panic this afternoon when I couldn’t remember the log in details for my WordPress account and fearing that my thousands of words of scintillating wit were lost to the world forever, and after I found my lost glasses minus the lenses (long story), I’m back.  I’m guessing those Serbians who visited the page yesterday to read my two-year-old review of the episode of Wife Swap featuring Charo are pretty pleased with that! So let’s blow off the cobwebs and get on with it.

Of course, I had to be back, because The Bachelor has returned for a new season – and what a bachelor channel 10 has served us up: former rugby international and eternal honey badger, Nick Cummins. He’s not your standard bachelor at all: he’s named after an animal, he sports a mop of hair and a lip doily that the 1970’s Solo Man would covet and he talks in quintessential ocker similes. 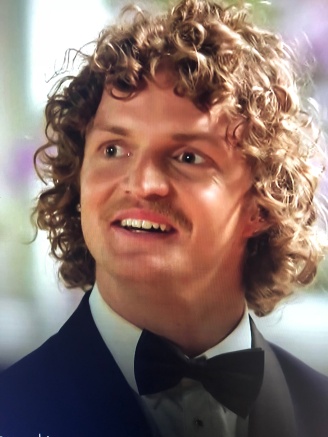 I never had any doubt that Mr Badger would end up on mainstream TV sometime.  I mean, he already hosts an online show and does ads in his undies.  It’s just I thought he was more likely to turn up on Home and Away as Alf Stewart’s love child:

“I’m as nervous as a sheep in a paddock full of kelpies. But Alf… it turns out… you’re my dad.”

Few others could match Ray Meagher in the ocker stakes. A missed opportunity for sure, but no doubt this season of The Bachelor will have all the drama of a soap opera.  Let the curtain open on Act 1.

Osher has been busy over the off-season.  It seems that Matty J’s girls must have trashed the joint and got them all evicted, so Osher has spent the last six-months wrangling real estate agents to secure them a new place.  Thankfully his requirements were pretty simple: twenty-five bedrooms, 500 oriental lanterns, and a carp pond. Rose petals are scattered over gravel and all is ready for the Bachelor to receive his girls.  He just has to finish dressing, and it’s clear that despite Channel 10 being taken over by an American company, they’re not real worried about the Aussie version of the franchise making it to the US market.

“It’s time to strap on the bag of fruit and meet the shielas.”

Even I was expecting to come out with a bunch of bananas blu-tacked to his crotch.

In short order the girls start arriving.  The first is Shannon –  a skater, artist chick from Melbourne with a dodgy bowel.

“I’m shitting my daks right now!” she exclaims, and tries to pass it off on nerves.

No worries.  Nick decides to calm her down by dragging her across the grass where her stilettos sink into the lawn like tent pegs and she is totally stuck.

Nick is distracted by the arrival of Brooke who turns up with a Steeden, and if there’s one thing that will turn his head quicker than girl with pooey pants and a top that threatens to fall down, it’s a rugby ball. 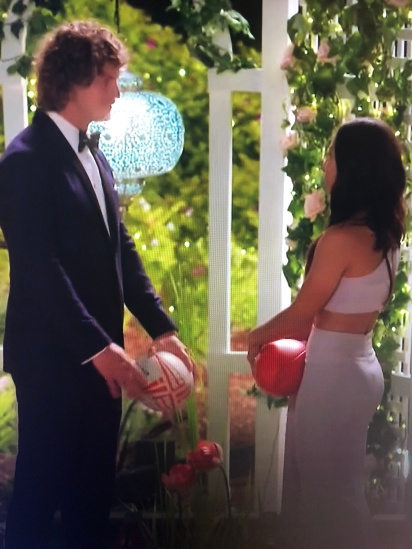 “I’m Brooke.  I play both types of rugby, and like, I totally don’t know who you are.  Like, I’ve never seen you before in my life ever.  Like not even on the tellie, coz I’m from Perth and the technology of screening live international rugby tests hasn’t reached Perth yet. Like even if you were a rugby player and played wing like me and did play for Australia?  I wouldn’t have seen you. Ever.”

Maybe it’s Shannon’s shitty daks, but I smell something foul in this.

Not only do I NOT follow rugby union and STILL know who Nick Cummins is, but because of him I also now know quite a bit about honey badgers. Like did you know it is also known as the ratel, is the only species in the mustelid subfamily Mellivorinae and its only genus Mellivora, and is native to Africa, Southwest Asia, and the Indian subcontinent?

Next is Brittany.  She has no hope of winning, because at thirty, she’s about seven years too long in the tooth, but she’s from Port Macquarie and born in the same hospital as Nick, and their mothers may have shopped in the same Woolies on the same day when they were  still in nappies.

I’m ashamed to say that the first of the season’s absolute lunatics hails from the Sunshine Coast.  Her name is Cayla and she is an “energy healer” which I think means she stands outside supermarkets harassing people to save money by changing electricity providers.

She’s followed by a girl named Cat. She looks like Keira Maguire would if she had ditched Jarod, dyed her hair and swung round for another crack.  She says she’s from Bali, which must be one of those outlying new suburbs of Brisbane, and she’s a fashion designer…which means she can wear cockroach earrings with confidence.  We know she’s going to be the villain because she is brunette – and she has short hair…and cockroach earrings

On the brunette front, to be fair, this season Channel 10 seems to be more of an equal opportunity provider.  A whole string of them are paraded before Nick, notably another Cayla who is also a lunatic.  This one is a flight attendant – and someone call QANTAS – they might like their serving trolley back (and how did she get that into a limo, FFS?)

There’s one blonde named Christina whose voice is so high-pitched that it can be heard by dogs ten kilometres away.

“OMG! Are you the HUNNY BAADGER?” she shrieks, every other word drowned out by a cacophony of canines.

A string of other girls follow, but the only one of interest is Cass, who holds court in the middle of the back seat of the limo and realises that she knows the Bachelor.  She has dated Nick! The producers are much excited by this news

PRODUCER: Has anything romantic ever happened between you two?

Cass remains coy, and twirls her Mariah Carey hair extensions like they have only been attached to her head for twenty minutes and she hasn’t yet worn them in.

Next to last is Dasha. She’s 32 and from Adelaide, via Russia.  She’s a personal trainer.  She greets Nick in the traditional Russian way: doing a handstand, wrapping her legs around his neck and then performing vertical sit-ups. If he looks down, he is staring into her crotch;  if he looks up her has her boobs in her face.  I guess that’s an example of Russian secret intelligence. 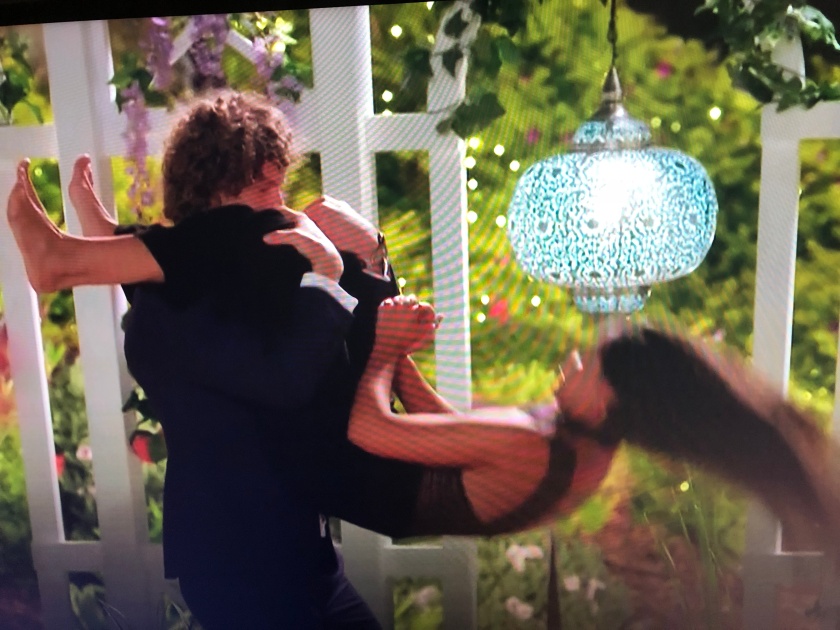 “Sorry. It got displaced by a Russian badger trap.”

With all the girls safely arrived, it’s cocktail party time.  Shannon has been imbibing these for about six hours since she removed herself from the lawn, and she is so jolly that she even seems to take an interest in Vanessa Sunshine repeating her own name over and over. 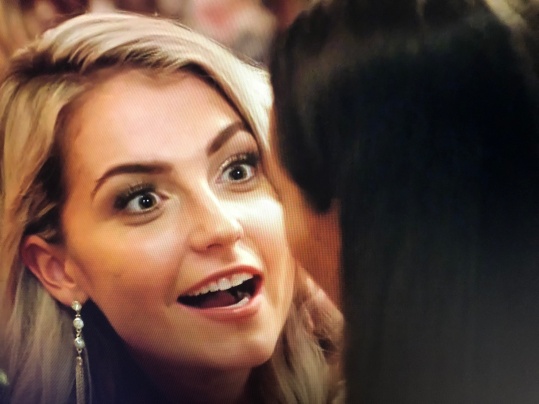 Alisha doesn’t know whether she wants to be on The Bachelor or host it and provides a running commentary of the evening which is mostly a four-pronged affair between Cat, Sophie, Cass and Brooke.

Cass is determined to keep the fact that she has already dated Nick a secret.

Then she sees Nick talk to a girl.

“Did I tell you all that I already dated Nick and he goes to my gym and I think he wants to impregnate me so I can have litter of honey badgers?”

(Fun Fact:  Honey badgers seldom have more than two cubs in any one go.)

Cat says that she would really rather meet Osher than Nick anyway, but then Osher turns up with a WORLD-WIDE-BACHELOR-FIRST which turns out to be a key to the bachelor pad and she decides that she wants that more.

Cass says that she has butterflies and her hands are shaking and that this means that she is really in love with someone, but having just re-read On the Beach, it could also mean that she has radiation sickness. In any case, it also makes her incredibly paranoid and she goes into stalker mode for the rest of the cocktail party. 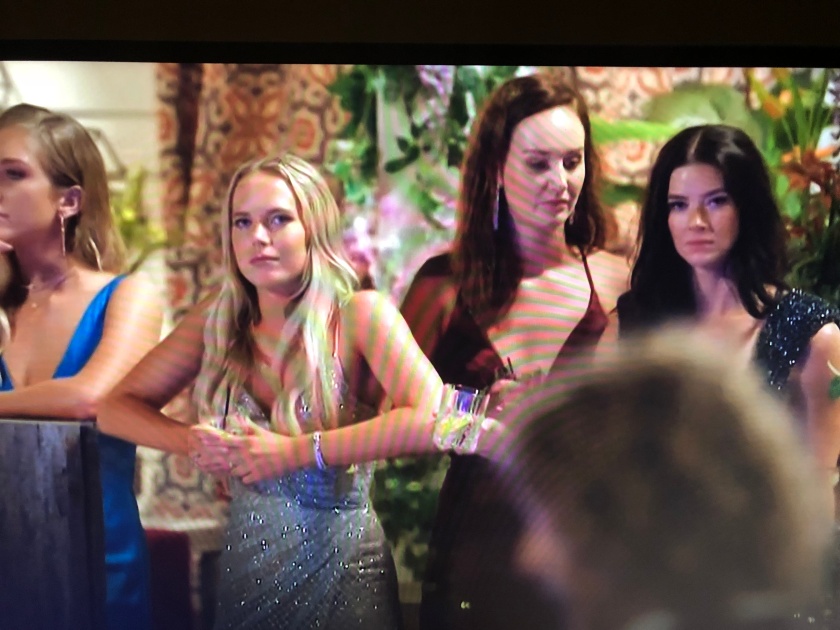 Meanwhile Kiera, I mean Cat, has set her cross-hairs on Sophie because she is the recent ex-girlfriend of her ex-boyfriend and he just made a special trip to Bali to with the sole purpose showing Cat the photos he had of Sophie on his phone, which is somehow Sophie’s fault. But before Cat can dump a glass of chardonnay over Sophie’s head, Nick gets to Sophie first so that they can race the slowest remote-controlled boats in the world over the surface of the carp pond.  No carp were rattled during this race.

What did rattle the carp was one of the nutty Caylas – not the Sunny Coast psychic, but the flight attendant one that decided the way to get Nick’s attention would be to throw herself into the pool fully clothed. Without a secreted QANTAS escape slide, this was totally ridiculous. 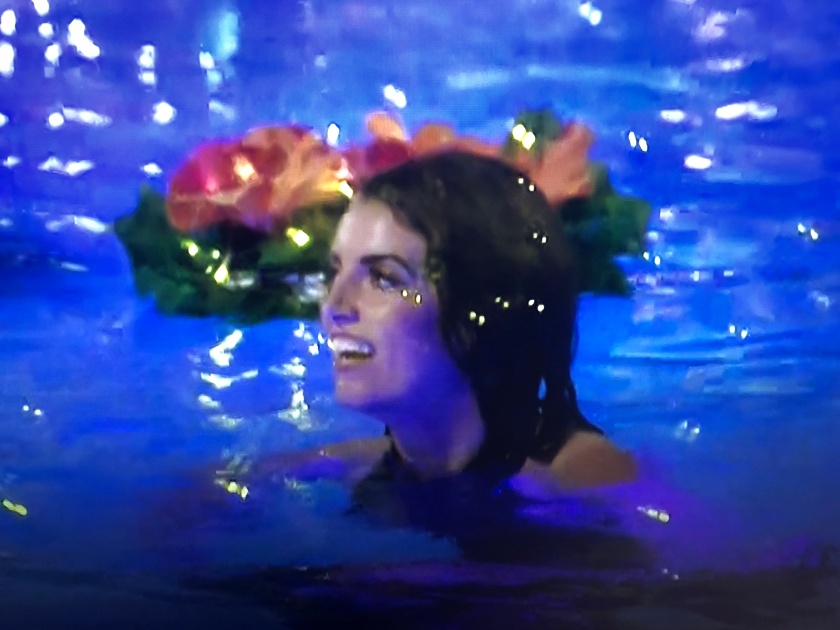 Somewhere along the line,  Nick bonded with Brooke over what would have been a slightly racist reference to Pocahontas (had Brooke not used it first) and some very lame Dad jokes. For Nick and Brooke it is not just a physical attraction; they have connected on an intellectual level.

After what seems and interminable amount of time, Osher finally arrives to explain how the rose ceremony works and there is tension as twenty-one names are called and three aren’t.

Both Caylas get a rose.  We all know that they won’t last; one Cayla was always going to be the token crazy, but when the other one chucked herself into the pool, Nick was too kind to let her go lest she catch a chill from the air con in the taxi.

By my calculation, Nick has eliminated all the Asians (ie. Autumn), one that looked a bit old (Suzie), and Ursh. 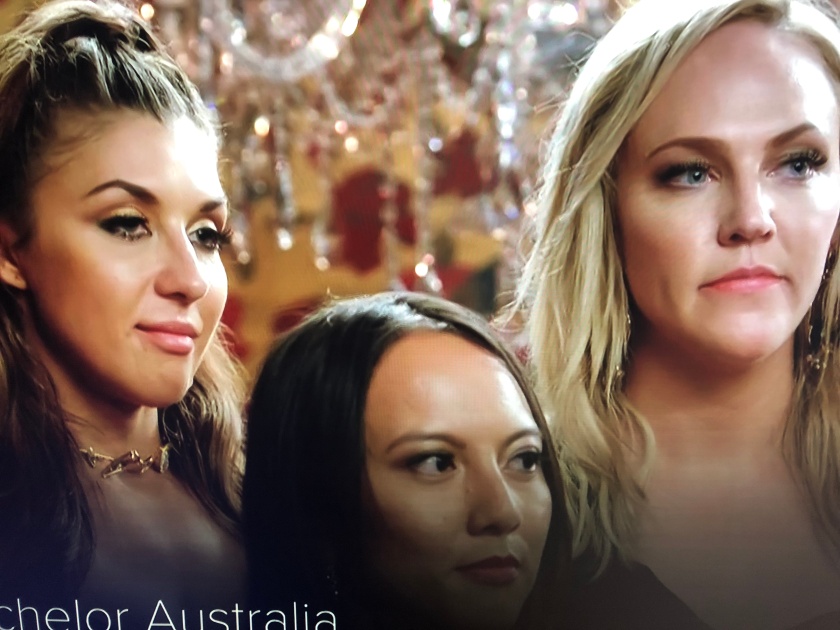 And there we have it.  Season 6 all sorted.  Favourites and villains, and one unique bachelor.

I’m as keen as mustard.