Another day dawns and everyone is another day older, especially Stu, Guy and AJ who have a head start on the ageing bit and Sophie’s original lads just can’t let it go. It’s already become old (haha) and casts a pall over the house.

Osher has been peering through the bushes upon the morose scene.  There’s no boy fun going on; no farting competitions, no flicking each other on the buttocks with towels, no-one is even having a cup of de-caf tea.

Well, Osher’s not interested in joining that dull scene so he dumps the date card at the front door and runs, leaving Luke to find it and make the announcement.

It’s a single date, which Ryan really wants.  Nay, he EXPECTS it, so there is much rejoicing when James’ name is read-out.

I have noticed how the crankier and self-righteous Ryan gets, the more pronounced is his native New Zealand tongue,  and he is pussed orff. He’s so pussed orff that he gives James the death stare, but it doesn’t work.

Sophie has really outdone herself in thinking up this date.  She takes the shyest bloke in the house, pumps him full of Prosecco and forces him to be her performing monkey on a little stage down in the Darling Harbour foreshore.

James would prefer to throw himself under a bus than perform in public, but with the Sydney Explorer Double-Decker not due for another hour, he has to come up with a Plan B.  He pretends to throw a fit and writhes around in obvious agony on the little stage, but Sophie mistakes this for rap dancing and gives him a round of applause. So James, always a trouper, sings terribly, dances awkwardly, and digs himself a little place in Sophie’s heart.

As a reward for his public performance she takes him to a private rooftop garden where they sip Manhattans and James says all the right things and Sophie’s eyes water she’s so touched and he reminds her of the good things about her dad and, my goodness, she just can’t help but ask to kiss him, which she does and they do. 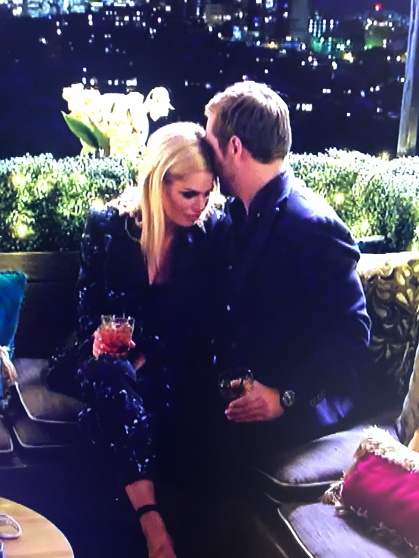 She gives James a rose and it’s all very sweet.  I reckon we could just end the series right there and avoid any train wrecks to come, but there are still a heap of blokes back at the mansion to sift through.

So it’s group date time and the boys arrive at Sydney Boys High School dressed as schoolboys; not super cool Angus Young AC/DC schoolboys, but this…

Jarrod’s latest attention seeking technique is to zip his shirt into his fly so he has a little white front tail so Sophie’s eyes will be drawn to his groin. Stu has jammed his cap on his head so hard that his ears lay out flat like he’s a human wingnut, because he’s sure that’s the way to turn on all the laaaadies.

But the uniforms aren’t pointless, of course.  They are an integral to the challenge which involves a series of Tests: paper plane throwing, basketball shooting, Maths and Spelling.   Nah…the uniforms are pointless.

In the first test, each of the boys has five minutes to construct the most aerodynamic paper plane.  Stu finishes his in only one minute, and stands back confidently watching on while Sam uses the Textas to fashion wings, and Jarrod concentrates so hard he almost bites his own tongue off.

After the time is up, the boys stand on the stage and launch their creations.  Stu’s plane rises about two inches in the air before it does a one-eighty and plunges, nose-first into the stage at his feet.

Jarrod doesn’t fare much better.  Sam’s creation benefits from the weight of all those Textas and about a kilo of Blu Tack.  He hurls it and it narrowly misses Jarrod before smashing a hole in the wall at the opposite end of the hall, jetting out onto the street and knocking an unsuspecting kid off his skateboard before disappearing down a storm drain. One by one a progression of paper jets soar past Jarrod’s crumpled little heap until only Guy remains.

Luckily for Jarrod, as an aeronautical engineer, Guy makes a pretty good optometrist, and Jarrod is through.

Jarrod is through!  Jarrod is through! And he runs around with his arms outstretched and he’s super-excited because two people made worse paper planes than he did. I am 150% sure that the celebration out-weighed the accomplishment.

All it does is get him through to the Basketball Test, where he again finishes third last.

It is Blake who is certain that he will get through this round.

“Basketball is like…my thing. Shooting under pressure.  That’s what I do.” Yeah. Right.  As long he’s shooting himself in the foot.  He can only manage four baskets in sixty seconds and he is out.

The pressure has all been too much for Jarrod who, by the time they get to the Maths test is unable to divide ninety by three or figure out that anything multiplied by zero equals zero, as is demonstrated in the following equation.

A bachelor goes on eight dates with Sophie, but she shows zero interest.  What is the chance of that bachelor winning her heart?

The final test is Spelling.  Osher and Sophie have scoured their copy of My First Illustrated Dictionary for Kids Who Can’t Spell Good and then have divided the lists into words that match AJ and Ryan’s respective professions.

Yes, this is as patronising and demeaning as it sounds, and AJ, who has only just arrived in the house, decides he still has a shred of dignity left and the only way to keep it is to throw the competition.

Ryan: We need to have a single date.  Then if there’s a connickshun, I’ll know if it’s worf it.

Sophie: Well there’s other blokes who know already, so I won’t be choosing you over them so you might as well head off and start looking for the right girl for you.

Sophie, the women of Australia and Nyoo Zeelund salute you.

Back at the house, the boys are worried, having done a quick count and figuring that they are one cock short of a cocktail party.

On cue, Osher appears from a planter box.

“Ryan’s not here. And if any of you don’t think you can love Sophie, you need to tell her, and she will send you home too.”

The camera lingers on Guy, who says nothing and doesn’t move and I haven’t seen him speak.  I actually think the real Guy might have snuck out and left a life-sized cardboard cut-out in his place.

Sophie arrives in a smoking hot red evening dress and as usual Jarrod pounces on her for a little bit of horticultural chit chat.

“Mine’s rooted,” growls Jarrod.  “One of them has sabotaged it.”  He flails his arms wildly in the general direction of all the other men.

Jarrod is not going to take such treachery lying down.  He takes it sitting down, and standing up and stomping his little grape feet, and going red in the face.

“You!” he shrieks, pointing a bony finger at Blake.  “You have pissed on my violas.”

“See!  You admit it!” Maniacal laughter.

“One of those men has pissed in my pot plant, and when I catch the culprit, I’m going to come down on his arse ten-fold,” promises Jarrod, which is exactly what you would think would eventually happen when twenty-five straight men are locked in a house together without any female company.

There isn’t a rose for Guy.  He just stands there, emotionless, unblinking, until Osher arrives with a trolley and wheels him over to say good-bye, then out the door before dumping him unceremoniously on the lawn. 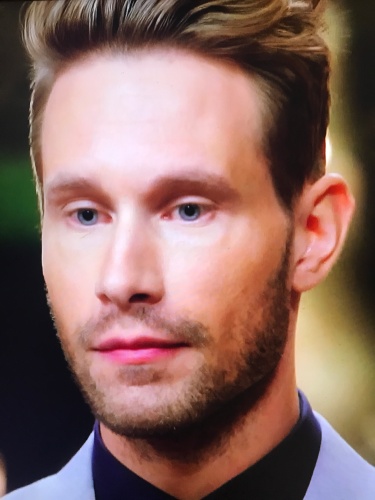 And from his pocket roll a handful of viola seeds, lightly dusted in potting mix…

See you next week.