Just like magic, Osher appears and Sam proves that he can read…a little bit, by reading the clue.

“I saw something old-time in you,” he says, actually managing a two syllable word.

Jared spits his latte out in excitement and starts swinging around on his chair.

And maybe Jared’s name WAS on the card, but in a sleight of hand only a magician could pull off, Apollo’s name is read out instead.

The theme of this date is 1950s, and to get them into the mood, Sophie arrives in a 1950’s convertible – a tiny little car to pick up the largest man in the house.  Thankfully it didn’t have the roof up, because Apollo’s head would have poked right through it.

They arrive at a genuine 1950’s castle, where Sophie sends Apollo off to dress appropriately.  Minutes later he is back for this present meets the past date, and he looks like Chris “The Rock” Johnson and Cary Grant had a love child.

Sophie has set up a camera and a set of index cards with questions to ask Apollo.  Then, in a totally unconvoluted scenario, Sophie will ask Apollo the questions and they will recreate the answers for the camera.

“So Apollo.  Tell me something about you I don’t know.”

“Until the age of thirteen, I had a really bad phobia about butterflies.”

Anyway, Sophie sets the timer and snaps away.

She decides to ditch the questions and instead takes him out to the garden, makes him don a top hat and presents him with a set of juggling balls.  Soon Sophie has Apollo’s balls exactly where she wants them; spinning in the air at the end of his arms which are threaded through the straps of her frock.

Night falls, and they have changed into dinner wear.  Fifties matinee idol indeed. Not only does he look like Cary Grant, he can dance like Fred Astaire, and he spins her around and presses her close and did I say…

After all that dancing they settle down for a Scotch.  Sophie asks him why he has matured beyond his years, and he tells her his sad story of having a mother who survived breast cancer and of his own terrible heart attack and kidney problems.

Yep.  Those’ll grow you up alright, and coupled with him telling her how he wants to know about her…

A rose is produced.

Maybe he does have that long tongue after all.

The next day Apollo and all the other guys, turn up for a group date at the Sydney Polo Club where the boys all hold a minute’s silence for polo player Bingham who was ejected at the last rose ceremony, just one date shy of his moment to shine.

Of course, I’m kidding.  Like half of these bozos can even remember their own names, let alone someone who was evicted from the house forty-eight hours ago.

Osher arrives grinning like a Cheshire cat to announce that Sophie is dubious about some of the young blokes and their desire to settle down and that four new old blokes will be entering the house.

And on cue, the men land in a testoerone fuelled heli-cock-ter.

First to emerge is Guy, 37, an optometrist with a dodgy accent who presents her with a set of prescription sun glasses.  They are supposed to make her see through the bullshit, but I doubt this.  She puts the glasses on and says that she thinks that Guy looks like James Bond.

What he looks like is a Daniel Craig action figure that has melted in a hot car and been pressed back into shape by someone with very strong thumbs. 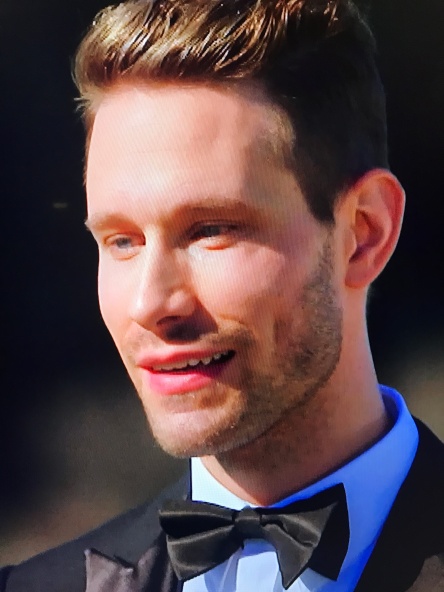 He’s a hit with the guys…not.

Yep.  Plastic action figure with one of those draw strings in his back to operate his voice box.

Next out is AJ, 37, a chef who presents Sophie with a personalised menu.  This is definitely tick with non-cooker Sophie, but he has two children and that could mean a crazy ex, or maybe even two crazy exes.

If that’s not bad enough, next is Paul, 39, a father of five sons (five crazy exes?) and grandfather of one,who has ditched whatever career he had to grow his hair and study law. Mid-life crisis, much?

Jared thinks that Paul is the youngest looking old dude he has ever seen which is ironic because conversely:

And finally there is Stu, 44, a third generation publican who can’t pour a glass of bubbly to save himself.  His ineptness sends the rest of the blokes off in a tirade of ejaculation metaphors, but it turns out Stu is really nervous because he has met Sophie once before, and the poor bloke is more accustomed to pulling beers than pulling chicks.

Thank goodness all these extra blokes have arrived, because finally Osher has enough players for his most masterful game ever:

“I present you with…BICYCLE POLO!” announces Osher to the sound of thunderous applause, cacophonous music and claps of thunder…

Yes.  I think it was crickets.

After dividing them into teams (Oldest versus Youngest), the game begins.

Apparently Bicycle Polo is another one of those skills which you are taught in the Australian Army and for the next twenty minutes we are treated to Jared trying to emasculate the rest of the blokes with a polo mallet.

His biggest casualty is his team mate, Blake, who cops a mallet to the face and leaves the field a bleeding mess. Why Jared would think that he could find Blake’s genitals on his head is beyond me, but the canny plan to eradicate his own team mate through friendly fire backfires anyway as Sophie rushes to his aid and kisses him on the cheek. 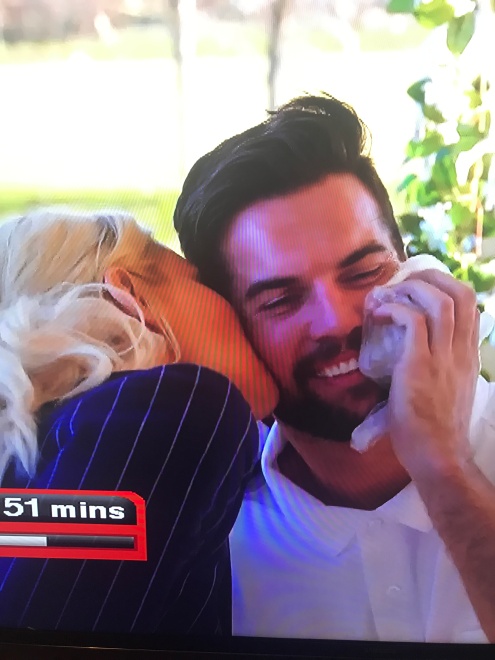 Not only that, but AJ, the old dude, manages to score the winning goal, leaving Jared a brooding, humiliated mess.

Apres-polo there is a cocktail party where the original boys are all on edge.

“Who’d steal someone else’s girl at a party?” laments one of them.

Good point, because it’s not the 1970s and besides, none of these boys has been allowed to drive for three weeks so there are no car keys, despite an abundance of ornate car key receptacles (aka ice buckets).

This is the twenty-first century, where men steal the girl in full view of each other and an average weekly audience of 800 000.

Then Osher, the party-pooper, arrives to tell them all that there will be a rose ceremony…in 30 minutes…back at the mansion.

This is enough time for Sophie to have her hair styled, redo her make-up and change into an evening frock, but not enough time for the blokes to change out of their polo gear, where they stand assembled in alternate blue and white, like fourteen bowling pins. 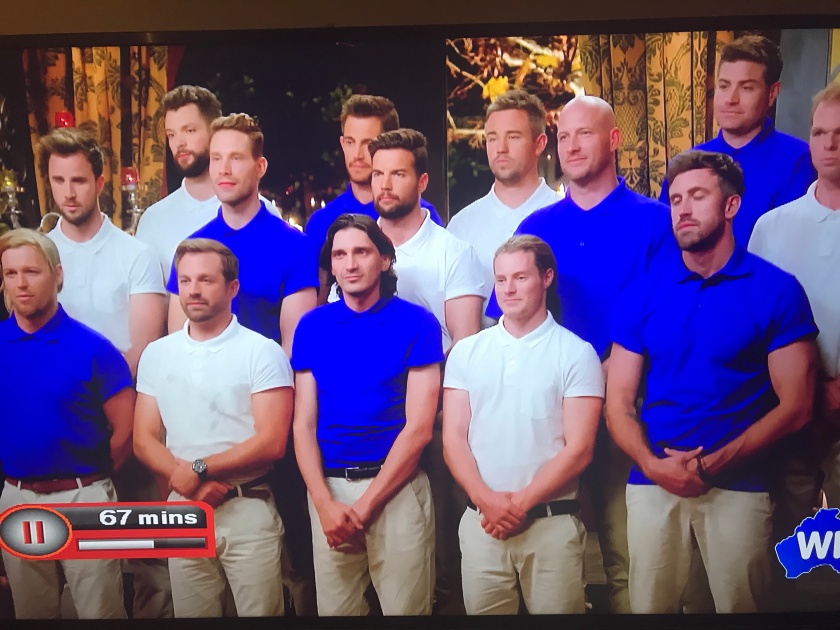 Osher arrives, sombre, because four in means four out. That means Apollo has a rose and there are fourteen other dudes, but only ten roses, which will leave eleven, and I am so glad Osher is there to keep track of all this rose stuff because I thought there were only ten blokes left last week, which would mean a nett gain of one.

Sophie arrives, and she starts saving blokes like a boss:

“Luke, Stu, Blake, Guy, Ryan, Mac, James, Sam and Jared,” she announces, and not one of them rejects her rose.

And suddenly, I notice Sophie’s mouth seems to be tinged with blue, and what I first thought was her new shade of lip gloss, appears instead to be panic and despair.

She needs a minute.  She needs to seek the counsel of Osher the Wise.

“This is the hardest thing I have ever had to do,” cries Sophie.

“Get back in there and read out a f*cking name.”

“Thank you, oh Osher, the anointed one.  My mind is now clear.”

And she walks back in, head high, and keeps AJ.

Intruder Paul is going home.  Perhaps it is less about the sheer quantity of his progeny, and their progeny, and more about the prospect of paying his HECS debt.

Going home are originals Brett (he who looks perpetually stoned), Hayden (mute since episode one), and Harry the Hirsute.

And it is Harry who has the final word:

“I know you will find love with one of these fellas, because over the past three weeks, I certainly have! FELLAAAAAAAAAAAAAAAAS.”

Maybe we will never know which of the fellas Harry found love with, but just in case Harry has found his soul mate…