I don’t know about you, but I have noticed something decidedly Curious Case of Benjamin Button about this season of The Bachelorette.  A couple of weeks ago they were being all manly and smashing the hell out of Ikea flat packs.  Last week they were dressed as school boys and flying paper planes.  This week they’re all dressed in onesies and spitting dummies. Heaven forbid what they’ll be like in hometown week and they are reconnected with their mothers…

But we have a few episodes to get through before that (the horrid image of which does unfix my hair) and this one starts with some of the afore-mentioned dummy-spitting.  Jarrod still has a bee in his bonnet about his pot plant, or more accurately his pot, as the plant is long gone.  In Jarrod’s mind, Blake is still Public Enemy Number One, but Blake maintains his urinary innocence with that rugged smirk that fertilizes Jarrod’s mistrust.

Crikey.  I got all literary there for a minute.

Then, just like a villain in an Agatha Christie novel who appears mysteriously on the slightest reference to his crime, Osher arrives.  All of a sudden it makes sense!  Maybe Osher has been sneaking into the house at night to water the plants!  We all know how Osher loves his games….

In any case, Osher explains his sudden appearance by presenting a date card.

To add to Jarrod’s angst, Stu is headed off with Sophie.  Not only is Stu an intruder, but he is a third generation publican (free drinks!) and he is worth $500 million bucks (myeah). Triple threat.

Stu tried to invite Sophie on a date on his boat a year or so back, but she stood him up.  Now that he has turned up in the mix, she decides to try to make it up to him by chartering a yacht and a pod of dolphins and cruising about the harbour for a bit. 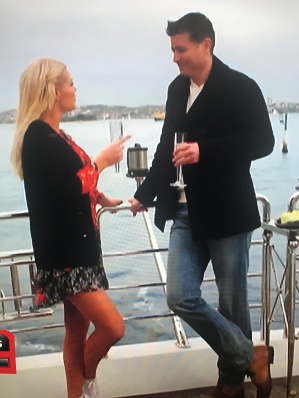 The boat is so big that it has a golf tee at the bow, so Sophie invites Stu to hit a few balls in the direction of a little heart bobbing around in the ocean.  One can only hope that she has paid the dolphins and they have headed home, because nothing ruins a date more than lodging a golf ball in the breathing orifice of a marine mammal.

Meanwhile, back at the house, the boys are sitting around in the kitchen, ironically talking about Stu but not cooking one. Sam is most concerned about Stu’s prostate:

Which is in balance really.  Beacause he speaks less sh*t than most of them.

On the boat, Stu has changed into something more comfortable, and Sophie has donned a blue satin jumpsuit with a visible panty line.  On the inevitable day lounge, Stu tells of his regrets about how he wished he had asked her out on a date properly twelve-months earlier and how hard he fought to get on the show.

Yeah, right.  I can imagine how that went down.

“Osher, maaaaaaaaate.  Let me on an I’ll supply all the drinks.”

And Channel 10s budget woes being what they are and the alcohol budget being what it is, Stu was in.

Anyway, it all seems a little bit stalkerish to me, and he makes Sophie a little bit nervous – like John Hinkley Jr made Jodie Foster a bit nervous when he shot President Reagan in a declaration of his love.

Despite MY reservations, Sophie gives him a rose and they share a kiss.  This would be very poignant, except that Stu hasn’t been in a relationship for a while and he thinks that tongue action is having a chat mid-embrace. Sophie still manages to seem impressed, but Sophie, Sophie, Sophie…HE IS NOT JAMES!

Next day, Sophie is lounging about in her house, and we know it is her house because all the coffee table books have her face on them.  She has invited all the fellas around to her place to wear onesies and play a few rounds of Boggle and maybe a bit of Twister, because that is her idea of F.U.N.

Sensibly, Sophie has allocated the animal themed onesies, because we just know that the fur would have flown if the boys had to fight over the elephant costume. Blake has ended up with that one, but sometimes length can be such as issue, as Apollo explains:

“He had a floppy blue trunk dangling over his face.”

Apparently, when all the animals in the jungle have a party, they never invite the giraffe, because it turns out that giraffes are bossy, cry-baby, party-poopers.

Did I mention Jarrod is the giraffe?

First, he takes over the kitchen by slashing at an avocado in such a menacing manner that he scares all the blokes into the courtyard to sink beers then complains that they aren’t helping in the kitchen.

Blake’s trunk waggles around in self-defence and Jarrod has his giraffe suit so tight that his face turns red.  Even Sam cowers into the corner of the couch while the rest of them all look sheepish.

Finally, Sophie announces her last surprise.  All of the boys’ families have sent mementos of their childhoods: James’ and Apollo’s bunnies, AJ’s footy trophy, the first kid Blake ever bullied…

And then Jarrod gets a bit of his blankie. 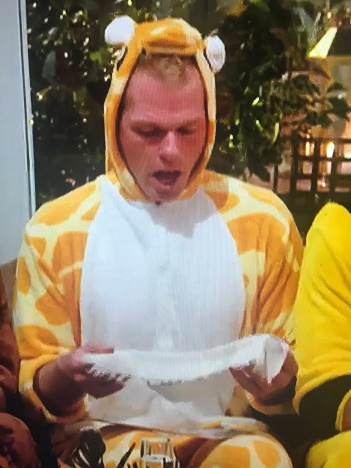 Not content with just saying, “That’s my blankie,” Jarrod proceeds with an almost homoerotic account of how his love of blankie prevented him from going on a sleep-over when he was ten.  Needless to say, Blake spits his boutique beer down the back of Jarrod’s neck as his efforts not to laugh fail him, and Jarrod storms out in a weeping mess, followed by Sophie in an attempt to console him.

To end the night, Sophie invites Mac, who earlier admitted his huge crush to her, for some one-on-one time. Poor Mac is star-struck, because he is in the presence of an “A-class celebrity.”

Now, never having sat on a celebrity grading panel, I am not that familiar with the criteria against which these levels are awarded, but let’s just say that I think the system might be a tad flawed.

Jibberish just flows from Mac’s lips, his eyes nearly pop right out of his head, and Sophie tries to retreat into the crack in the couch.

“I’d die for a rose!” exclaims, Jarrod, and while as a viewer I would find this outcome extremely desirable, it seems to jeopardise one’s chances of securing love.

Then Osher appears and announces that two men will be going home because there are two fewer roses than men.

Luke, Sam and Mac are left, leaving us hopeful that we have seen the last of Sam’s rubbish, but in something of a blindside, Sam’s name is called.

Luke is dumbfounded.  At least he had a single-date, a kiss…and was mistakenly mistaken for George Clooney.

Mac is shattered.  Sophie offers a heart-felt apology before sending him on his way.

In the garden, Mac pulls a pencil and his well-worn list of A-class celebrities from his jacket pocket.  With shaking hands, he looks down on the tear-drenched paper and strikes a quivering line through Sophie’s name.

“I’m here for you…” he whispers, glancing again at the list. “…Sam Frost…”

And he strides purposefully into the shadows.