I am really glad that it is hometown date week.  It means I don’t have to see the boys sitting around the kitchen table and the great big hole where Cameron should be. I am half-expecting Georgia to admit that she got the names mixed up and she meant to keep the fireman, but alas!  That was all a dream.

There’s no mucking around. We get straight into the home town visits, and can I say at the outset that some of these take the expression “Mummy’s Boy” to a whole new plateau.

First up is Matty who lives in Sydney, so she thinks she might as well get that one out of the way.

They start with a walk around the Centennial Parklands, where Matty casually drops into the conversation that he was part of the “Stallion Club.”  It sounds like the name of one of the night clubs that first-eliminated, Carlos, operates to entertain the ladies.

But then Matty reminds us that when he was a little kid he had to be in the pony club because his sister was.  Phew.  No leather cod pieces, just a couple of horses and a trot around the lake. 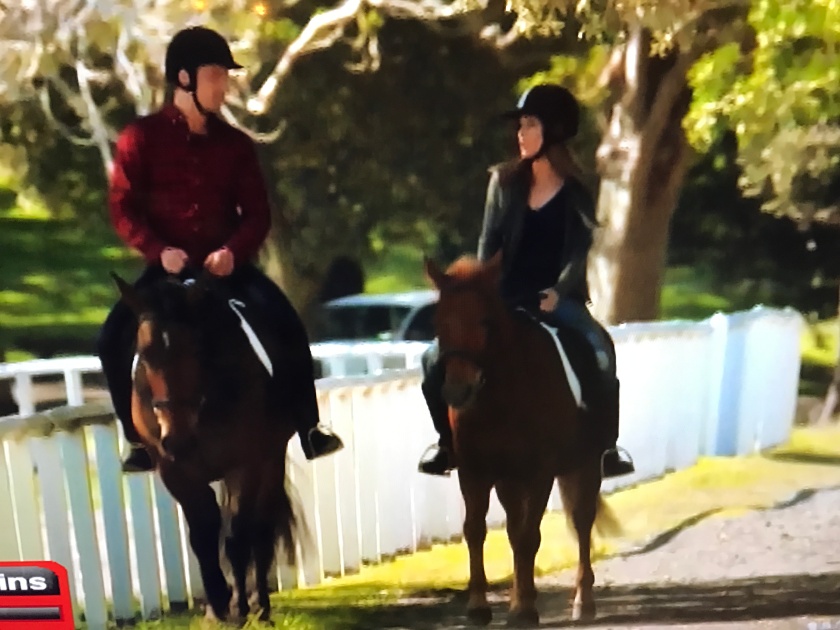 After they dismount, Matty warns Georgia that his family love him very much and they never want him to leave Sydney and they want him to start making babies straight away.

So Georgia should not have been surprised when she is at Chateau Matty no longer than thirty seconds before her champagne glass is whipped out of her hand and a baby is thrust at her bosom. 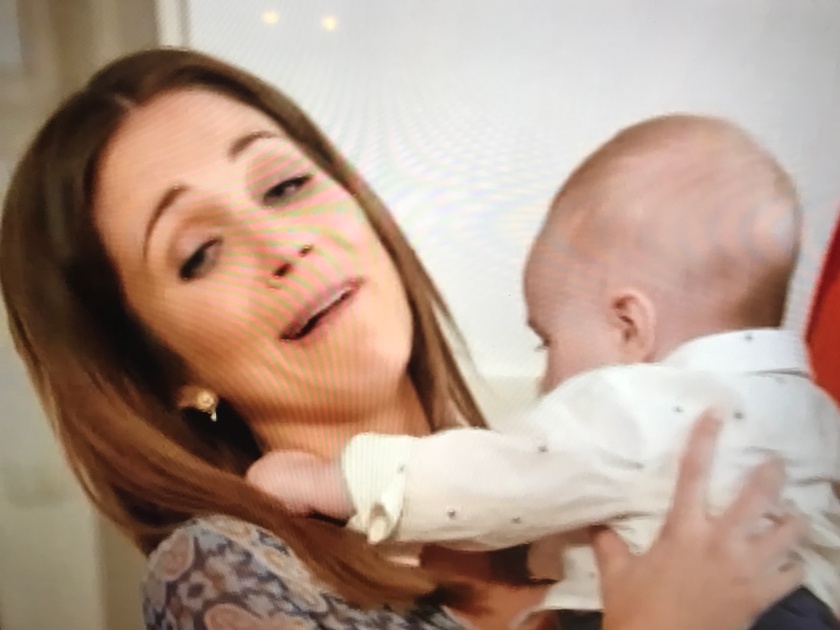 The baby belongs to Matty’s sister Kate, as in Princess Kate.  Heck she has even named her first-born George.

Once, the family let Matty go to London and he didn’t come back for four years, so there is just no way they are going to let him move as far away as Melbourne.  That’s a whole hour away by plane.

“Matty is quite eager to give me cousins for George,” says Princess Kate. And Georgia is getting the message loud and clear.

“She hates Sydney, she hates kids and she’s still pashing three other blokes,” says Kate.  “I know you will make the right decision.”

“How was my sister?” asks Matty, at the end of the night.

“She was lovely,” replies Georgia.  Maybe not.

Next it’s off to the Gold Coast to catch up with Jake.

He throws a bit of a curve-ball by taking Georgia straight to Mum and Dad’s place.  She is unprepared for such a development.

Jake assures her that his parents aren’t home, and next minute Georgia is elbow deep in a turkey’s arse. Apparently it is family tradition to bring home a girl for the first time and con her into stuffing poultry in order to make a good first impression.

To kill time while the bird is roasting,  Jake shows Georgia the ritz and glamour of his home town…by sitting on a picnic blanket, sipping champagne next to the Gold Coast’s largest monument to the phallus. Then it’s back to the house and true to Jake’s word, his mum, Robbie, cries as they walk in.  I reckon Dad, Brian, might have squeezed a couple out himself.  Clearly they have missed their boy.

Robbie wastes no time in shooing the boys so she can have an awkward conversation with Georgia. Again it’s all about Jake’s moving to Melbourne, which is some sort of black hole that vacuums first born sons living north of the Murray away from their mothers, leaving them to fend with only their uglier second borns.

On the first date Georgia and Jake shared we learnt that both of their mothers were battling cancer.

“I need to stay in Melbourne at the moment because my Mum is ill,” explains Georgia.

And there-in lies a dilemma.

Nothing more can be said there, and I certainly have nothing funny about it, so they head to the dinner table where brother Luke continues to go on about the horrors of Jake moving to Melbourne, and his Dad is rendered mute, and very very sad by the very thought of it. 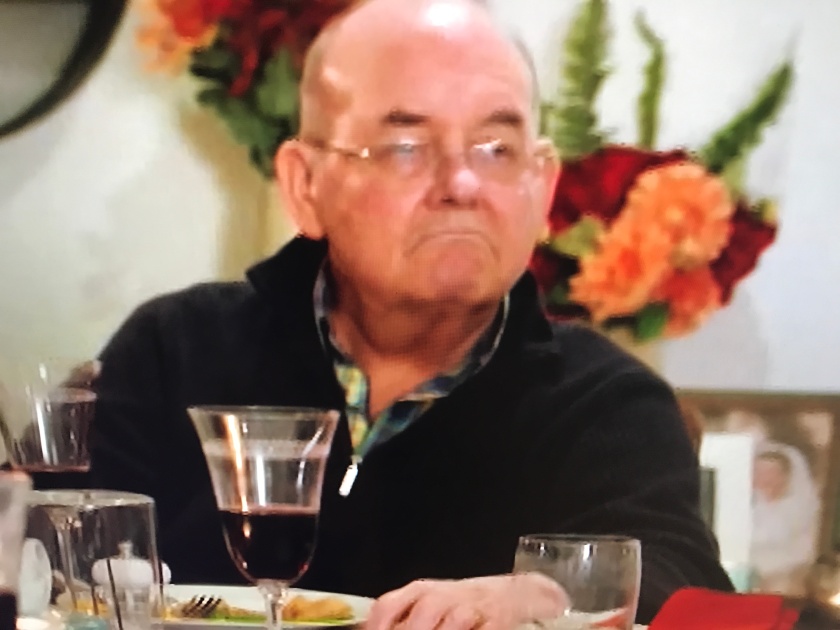 Robbie then takes her boy aside.

This sounds lovely, but the subtext is clearly that his heart belongs with his mother.

The third date is with Lee.

Georgia reminds us that Lee won her over with his amazing sense of humour, which is exactly the same as hers; except that last episode he found this pair of spectacles which seemed to change him overnight. No come to think of it, I haven’t heard any jokes about pushing Greeks off precipices in a few weeks.

Lee first takes Georgia for a coffee on what looks like one of the rooftop gardens The Block whips up.  I keep expecting Scotty Cam to jump out of a planter box screaming at them to piss off back to Channel 10.

After admiring the view of the Melbourne city-scape, they head off to Lee’s house, where his eighty-six-year-old Gran is half-way through a bucket of wine and her tongue is nicely loosened. 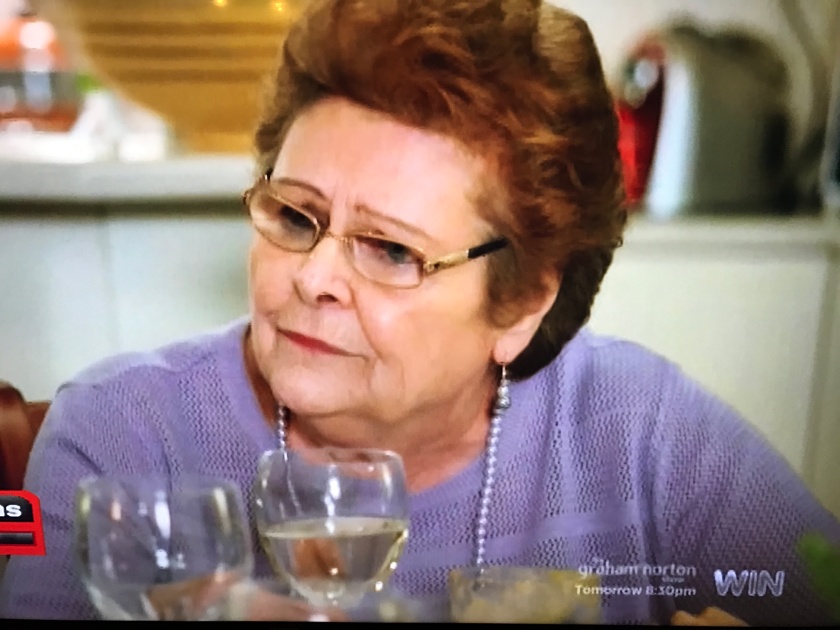 “You have all these men.  Do you love children?  My grandson Lee is so funny.  You make babies with him?”

Georgia is saved by Lee’s mum who takes her to the couch where she drops a bombshell.

It’s Gran, however, who has the last word.

“Have fun with your other three boys…and forget about ‘em!”

Well no-one wants to break the heart of a cute and feisty Grannie, but Georgia has this niggling feeling that Lee is a gentleman who prefers blondes, and from what I observed last season, that makes him a perfect candidate to be the next Bachelor.

Finally it’s back to Sydney for the home town date with Courtney.

For some reason Georgia still thinks there is something to explore with Courtney, but then he rocks up to this date in a maxi-cardi and a T-shirt with a white line down the middle like he has left it on the clothes line in the sun for a couple of weeks. 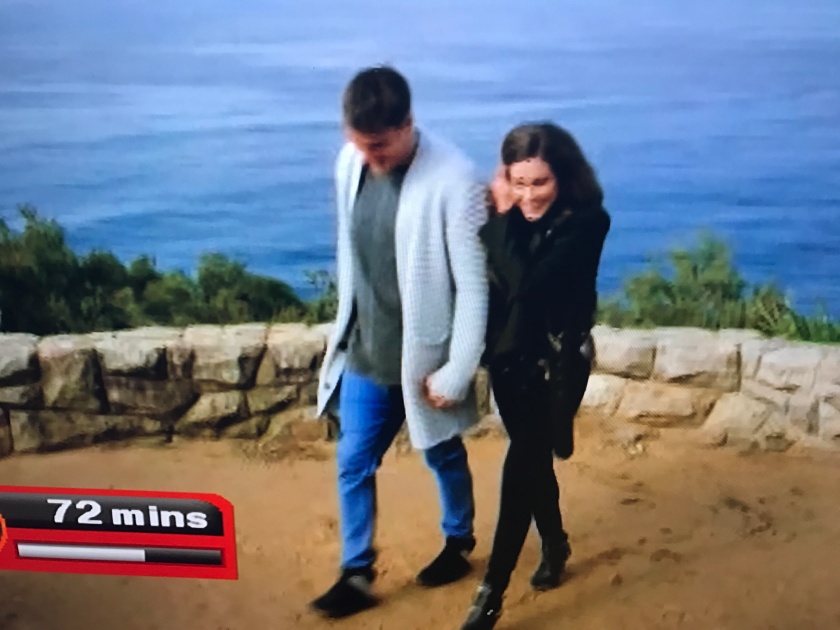 Then, Courtney makes Georgia dress like a nipper and sets up a flag race. with a sprint down the beach which ends with her face-planting in the sand. It’s reminiscent of the last date Courtney planned for Georgia, where she face-planted in the water. 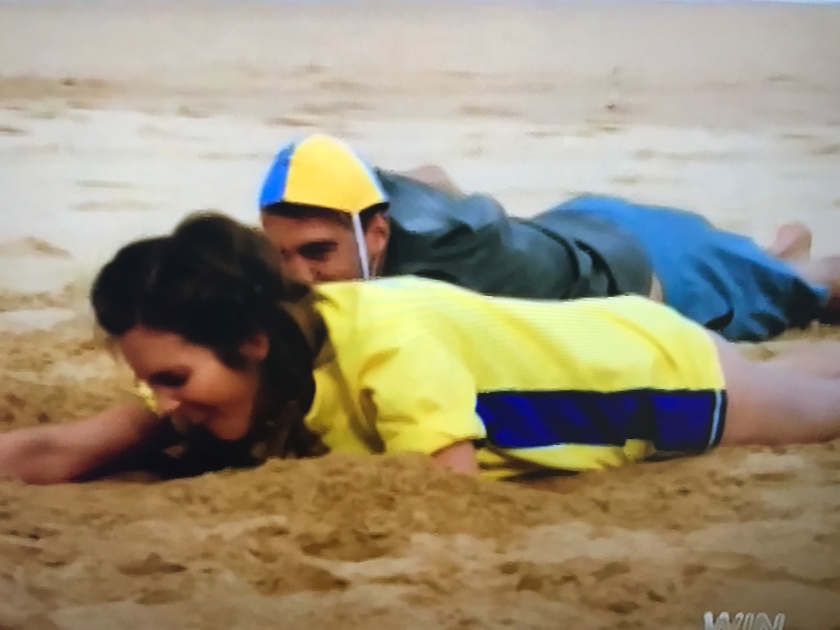 To coin a phrase, this is the face-plant that broke the camel’s…face? So much for phrase invention. What I mean is, Georgia is over his silly games and asks him the question:

“Are you seeing yourself standing next to me at the end of this?”

The look on her face says it all. I sent Cameron home for…this?

Then in some sort of twisted logic where she seems to think she will be appeasing the ghost of Cam, she decides to go to dinner at Courtney’s place, rather than boot him off on the beach.  Or maybe Menulog doesn’t deliver to the Bachelorette house anymore and she feels like a feed. 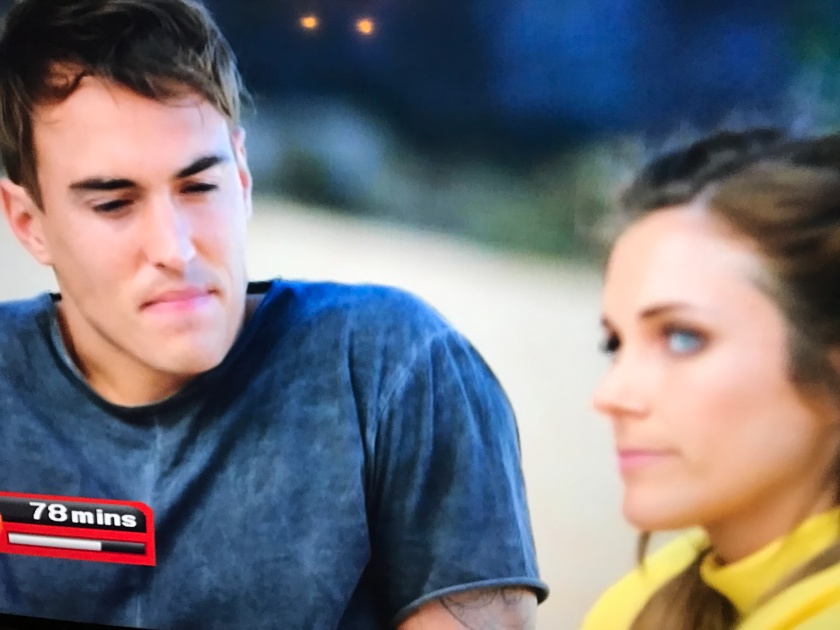 For their family date, Courtney has at least ditched the maxi-cardi. There’s no mum to deal with here, but Courtney’s baby sister Keely starts the ball rolling.

“How is Courtney different from the others?”

Somehow Georgia manages to restrain from blurting out that he is a complete twat.

Courtney responds by carrying on like a complete twat.

Even his brother Jarred thinks Courtney is behaving like a twat, and takes the opportunity to call Georgia out for THE CHAT.

In my experience of The Bachelor/ette,  this is the first time a family member sticks their sibling in it. Jarred not only looks like Courtney, he speaks the same crap.

Outside on the porch, things just go even further downhill.  While the other three smothered Georgia in a passion-filled embrace and spoke of their anguish about their parting, Courtney offers a public service announcement for the Sydney Metro:

Travel safe?  All of a sudden my head is full of images of billboards in train stations and shrink wrapped buses, plastered with pictures of Courtney dressed in a maxi cardi, waving, and smiling like a loon.

It’s cocktail party time, or at least it would be if there was anyone there to make it a party.  Courtney doesn’t even seem aware that the other three boys are MIA when Georgia suddenly appears.

For a minute it looks like she is going to continue to flog a dead horse and attempt to get him to profess his love.

And finally…finally…the penny drops and she gives Courtney his marching orders and cancels the Rose Ceremony. 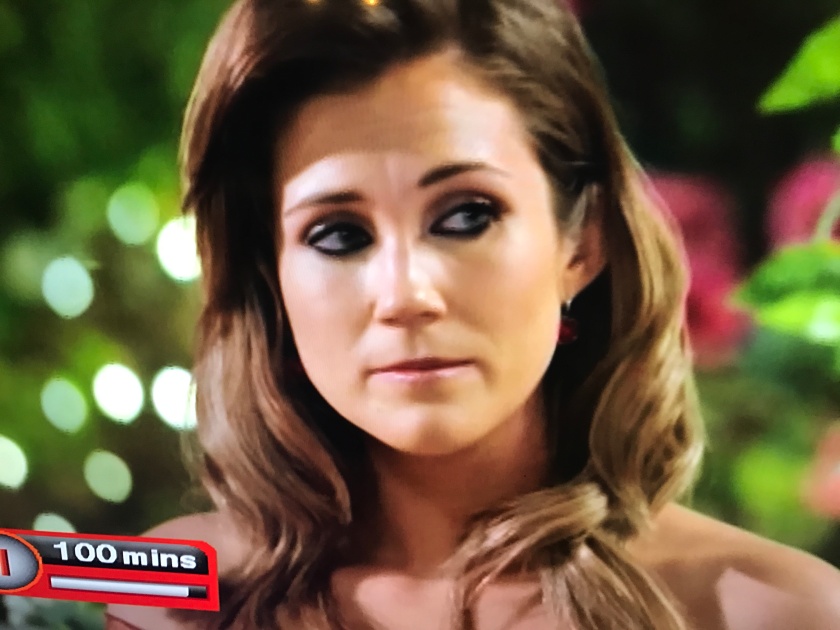 No roses to count. Does Osher even get paid for this episode?