Aaaah!  Don’t we just adore a happy ending and a great love story?  And there could be no happier an ending or as great a love story as the one that unfolded last season on The Bachelor…

Megan and Tiffany made their relationship Instagram official this week, posting snaps of the surprise birthday weekend trip to the Abrolhos Islands Megan organised for Tiffany’s thirtieth birthday. Nothing speaks “Ilse d’amour” more than these barren rocky outcrops, most famous for a 1629 shipwreck where the survivors raped and murdered one another.  It must be a Western Australian thing.

That whole pack mentality thing that the Batavia survivors experienced is known as folie au deux.  Only the French could come up with such a pretty sounding name as this for what is “collective madness”.  And here comes the segue (the Italians aren’t too bad at fancy words either!)… the collective noun for fans of The Bachelorette should be folie au deux.  How else to account for the fact that we are still watching?

And forget about the collective, I’m still well and truly individually mad that for all those weeks we had to endure Courtney’s ugly shirts, appalling hairstyle and questionable dating decisions, not to mention the demise of Cam (I get the irony in mentioning it) before Georgia FINALLY sent him packing.

I’m pretty myah about any of the three lads remaining: pony boy Matty, donkey boy Lee and turkey stuffer Jake.  I guess of the three I’ll back Jake, if for no other reason than he’s a Queenslander, and Channel 10 really wants us to get behind our Queensland reality show contestants, even though we are notoriously bad at winning them.  We had three Queenslanders in the final four of this week’s finale of Australian Survivor and they all still managed to lose to “poor, guileless Kristy” who turned out to be something of a sociopath who convinced Lee to fall of his pole, seamlessly detailed her whole game strategy to the tribal council and walked away with half a million bucks.

So Jake, I reckon you’re dead in the water. But we may as well see how this thing plays out.

So our episode opens with Georgia whipping over to Tassie to pose pensively atop a clearly freezing Mount Wellington and then popping back to Sydney to jot it all down in her diary.  All three of these blokes make her feel all gooey, so it’s time for one last date  with each of them to narrow it all down.

Georgia drops in by helicopter to a paddock where Lee is just casually leaning against a wooden fence.  She picks him up and off they go to revisit their relationship. They fly over the secluded beach where Georgia pointed out her X-spot and then Wiseman’s Ferry where they danced dirtily.  It’s all very romantic, and could have only been better if Lee had worn socks.

Before long the helicopter deposits them next to a pillow nest and a bottle of champagne. The lighting is good enough that Lee again doesn’t require his spectacles and they talk about how much they enjoy each other and Lee throws his wine glass into the garden and caution to the wind as he goes in for a pash.

After they have downed the bubbly, they head off for a bike ride.  This wanton display of drunken cycling is just not on.  Where is Courtney with his “travel safe” message when you need it?  Somehow they manage not to run-each other off the bike path and into the lake, despite the distraction of Lee rabbiting on about Melbourne and just how fucking fantastic Melbourne is.

That night, over a glass of wine, Georgia asks Lee what it would be like if she wasn’t from Melbourne.

That’s enough for Georgia and they share a kiss, just so she can shut him up.

The next day Georgia is off on her date with Jake.  It’s a nautical theme, and they are off to sail a super-yacht around the harbour.  It’s so romantic; they don’t even get sea-sick or anything, not like those weak-bellied Sydney to Hobart yachties.

They sneak a couple of pecks before retiring to the pillow mound assembled at the stern.

OMG!  WHO IS DRIVING THE BOAT?

Over glass of orange juice, Georgia tells Jake about his Mum wanting him to stay on the Gold Coast.

“Oh really…um…I was trying to lip read…but…um.  Hey, have you seen the front bit of the boat?”

And there it is.  The most predictable moment on any Bachelor/ette water-borne date (and if I think back on previous series, nail in a contestant’s coffin):

Night time comes and Georgia has booked Jake a room at The Star where he can drink beers all by himself.

Georgia arrives in a plunging dress, and they settle into a couch near a window overlooking the Sydney nightscape to talk about…Melbourne. And living in Melbourne.  Wouldn’t you know it, Jake loves Melbourne, but:

“Distance is only a problem if you let it be,” says Jake.  “And I want you to be the one.”

Georgia is impressed, but she still has to have a date with Matty.

She meets up with him the next day at the beach near a lifeguard tower where he has just finished participating in a nippers’ carnival.

He’s only said the “L” word to one other girl before, so he sees his chance to get in some practice by referring to Georgia by her full name at every opportunity.

Georgia has rocked up in a sporty black convertible.  She attaches a set of P-plates and lets Matty have a drive.

“You’ve got my sister’s seal of approval!” shouts Matty over the noise of his throbbing engine.

But this is not really great, because you will recall that Matty’s sister, Princess Kate, is way too fixated on her brother, and that can only end with some sort of small animal simmering in a saucepan.

Having only hired the Porsche for an hour, they desert it outside the Archie Rose Gin distillery.  They are met by someone; it could be Archie, it could be Rose, but I’m not judging.  He/she checks Matty’s ID and lets them in.

Later, they head back to their lodging where they don matching swim-wear (cute!) and have a dip in the Jacuzzi.

Matty manages not to mention the word Melbourne at all, substituting it for interstate.

They entwine.  They stare onto each other’s eyes.

That’s why it’s hard, Matty.  You will learn that when you get into senior school and study Biology.

Georgia is wet, and I think a little bit moist as well.

But before we can get too much of that, it’s rose ceremony time and it is clear that Roger David had a sale on velvet suits and the boys all went shopping. 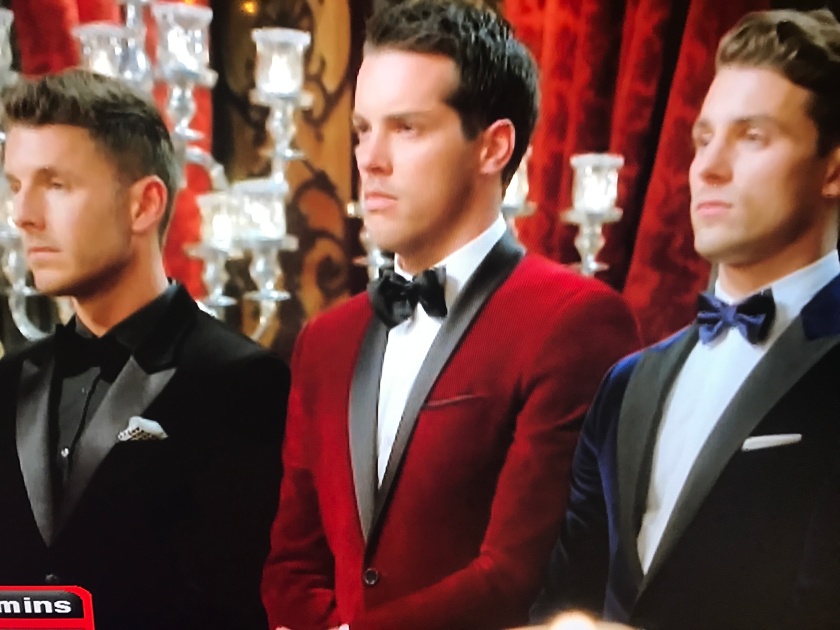 I can’t help but think that Georgia wasted that drop dead gorgeous red frock on Courtney last week, because this black strapless dress is the worst one she has worn all series and a little bit frumpy.  It still gets Matty breathing hard. National Geographic pictorials of breast-baring Amazonian tribes get Matty breathing hard.

Osher arrives for a sentence or two, then disappears.

Jake is gutted.  So is Matty.  Remember why you are here, Matty.

So am I.  Another Queenslander bites the dust.

Georgia feels a connection to Jake, but to take him away from his family at this time, she would have to be 100% certain. 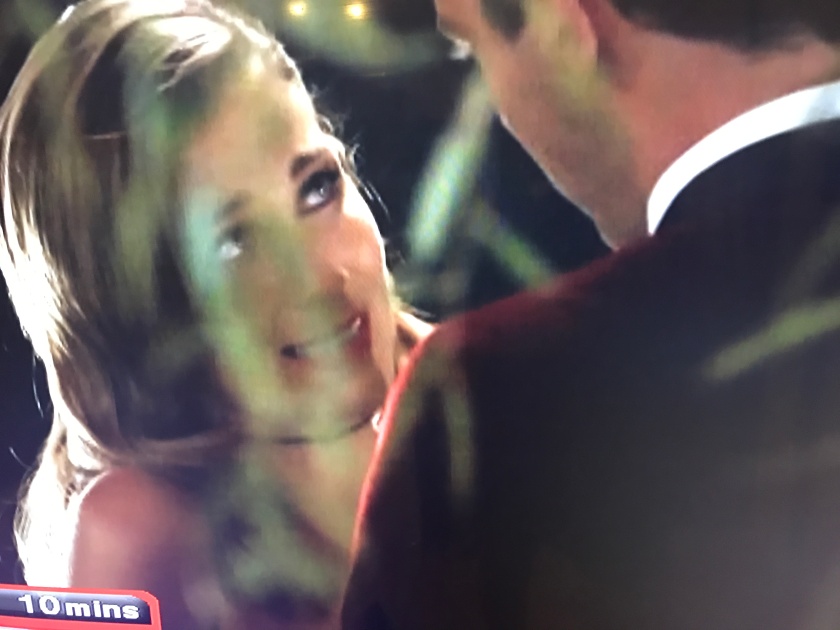 Georgia Love, you are all class.  Or at least you are as classy as this format allows.

Anyway, if you’ve ever wondered who would win a race between a pony and a donkey, tune in tomorrow.

One more episode until the madness ends.