The house seems a little empty this morning. That happens when Georgia does a whole-scale cull.  There’s so much room in the kitchen, that Matty gets to sit at the grown-ups table. 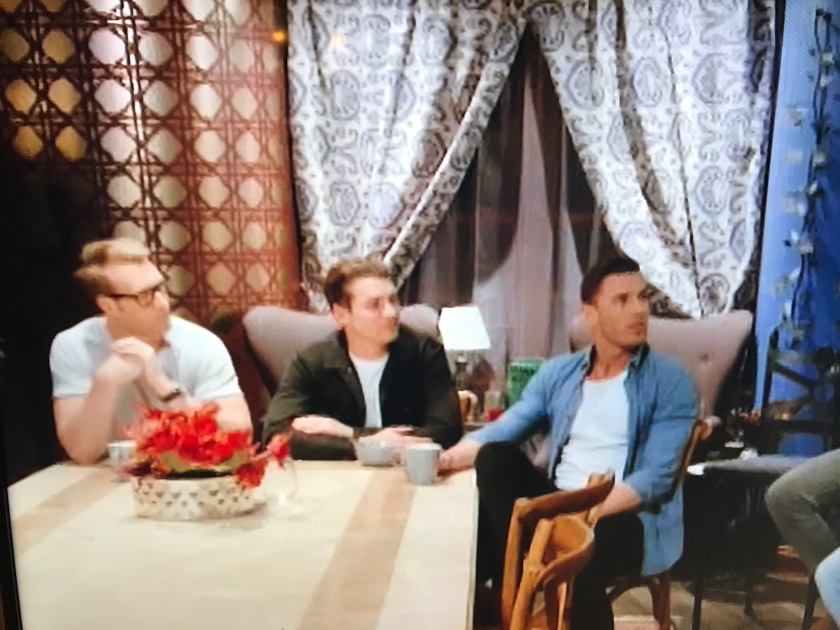 Osher soon arrives with the date card, and a reminder that there’s not much time left for them to make an impression.  Matty is amazed that he is the one chosen for the single date and he gets the impression message loud and clear, so he quickly runs upstairs to put on his big boy pants and find some platform shoes so that he is ready to “go back in time’ with Georgia.

Georgia picks up Matty in a vintage convertible and almost immediately falls prey to The Bachelorette problem of hair in the lippy.  Seriously, I am prepared to nip down to Aldi and buy the producers a few packets of hair ties. 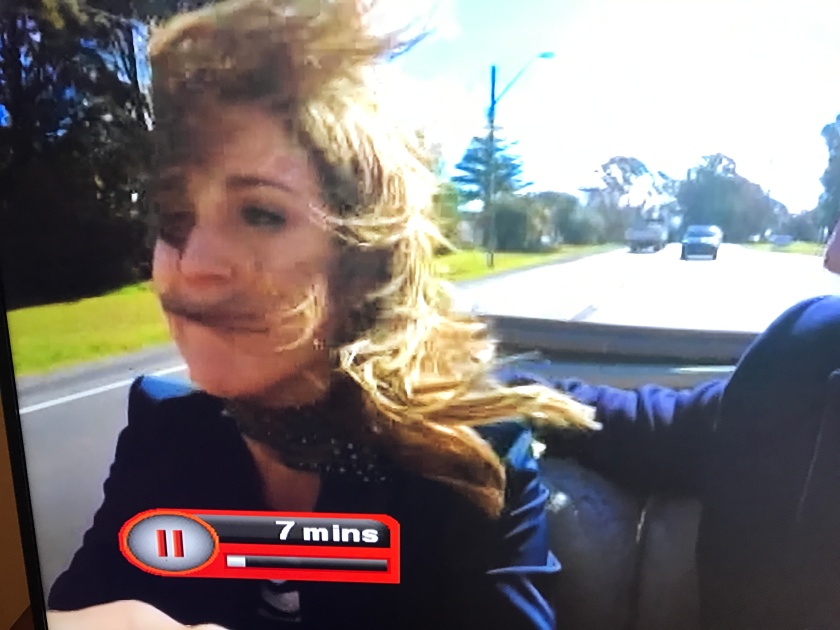 Her hair is in her eyes too, yet somehow she avoids crashing the car before they get to the marina where they board an old boat for a cruise on the Hawkesbury.  They have barely taken a sip of their whiskey sours before they are distracted by some sax.

What are surprise! The Swinging Cats have doubled-booked and are interloping on Georgia’s date.  But guess what?  They are dance teachers!  You couldn’t have scripted that! So to apologise for stowing aboard, they offer to teach Georgia and Matty a few moves.  This should be a breeze for Matty who has all that hip moving practice from his days of the 10 000 metre walk .

The sun soon sets and Georgia changes in to her red rose frock and she and Matty swing around the dance floor.

It’s been all of half an hour since anyone has cracked a bubbly, so spent from all that foxtrot, they retire to the lounge.

I remember being told once that opening a champagne bottle should sound like “an angel farting”.  Matty has apparently heard this too, and Georgia seems quite impressed by the way he grabs the neck of the bottle and pops the top.  She is so impressed that she initiates a kiss.  Georgia feels butterflies, although it could be that too much swing, seasickness and a four week long champagne diet have finally caught up with her.  She gives Matty the rose and in his own mind he’s already picking the alternate drop menu for the reception.  He’s forgotten about all those fully grown blokes back at the house.

Those blokes are off on a group date of Osher’s design, which means blindfolds. Perverted bastard.

But Osher has truly excelled himself here, and has dropped in to the closest aged-care facility and invited five of the gents on an outing, only to let them find their own way home.

Their job is to speed date (very slowly) Georgia, with the bachelors feeding the answers to Georgia’s questions through earpieces.

It’s quite the risk introducing five new intruders at this stage of the game, especially Russ, who is quite the looker: 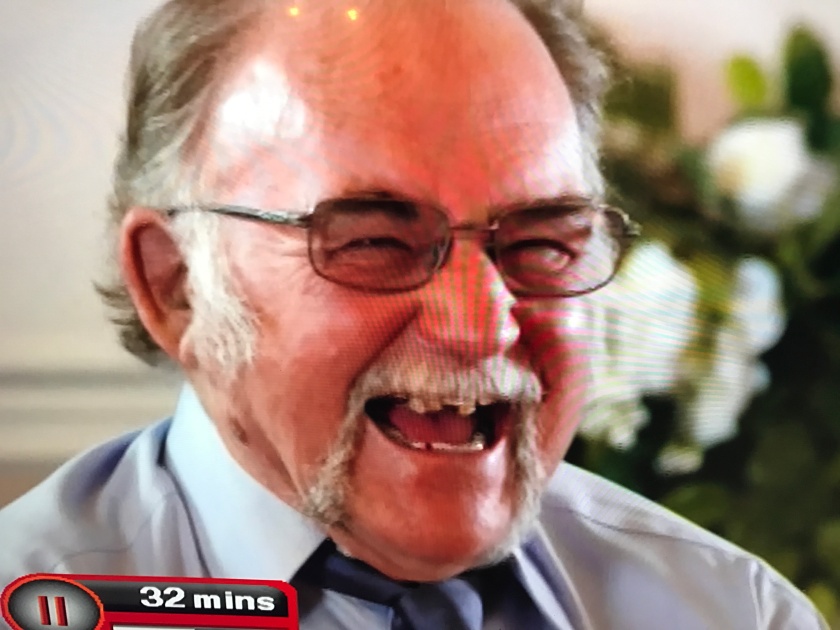 Clancy’s old fella goes a bit rogue, and his senior citizen, Andrew doesn’t follow the script either. But the embellishments aren’t enough to save Clancy from being eliminated in the first round.

Oh no. Oh no. Another opportunity for crappy poetry.  Osher even encourages it by inviting the boys to get their Shakespeare on. I know he’s only a TV host, but who would have thought that Osher had so much disrespect for the English language?

Soon the boys get down to write their letters. Jake has no problem because he’s written a few in his time.  Lee reckons they must have all been shit, because here he is on The Bachelorette. Good point. Cameron hasn’t written one since primary school so he grabs a few crayons and draws stick figures instead.

Then in a twist, the boys have to read the letters to Georgia, but not their own.

Well no-one wants to look like a complete arsehole and sabotage another guy’s prose, so they each read their allocated letter with emotion and sensitivity.  The result of this is that the boys all seem to be falling in love with one another and are totally oblivious to the crotch shot courtesy of Georgia’s mullet dress.

But then they are shaken back to reality.  Lee gets to read the effort of perpetual fuck-up, Courtney.  He has fallen for Osher’s trap and written a poem:

There once was a man who loved pasta

Who wanted his date to go faster.

So he went with a rhyme,

And couldn’t think of anything to bring it home, but what-the-fuck, he can’t dance anyway.

In round three, Georgia is blindfolded and has to choose the best dance partner of the three. Cameron reckons he can’t dance, but he is a liar-liar-pants-on-fire.

Not only that, he sets Georgia’s pants on fire and he wins couch time with her.

For the first time all series, we see the pair ingest something semi-solid: Haagen-Dazs ice-cream, washed down with a swig of champagne.

Cameron’s effort to prevent his face grimacing at the aftertaste of this combination results in an annoying knee twitch.  Georgia finds all that twitching a bit endearing as Cam tells her he is in this for the right reasons and they share a kiss. No rose, but no threat of elimination either.

Clancy and Courtney should be shivering in their shoes. Clancy shoots himself in the foot early by not understanding Georgia’s Mad Men reference.  No surprise.  Jon Hamm, he ain’t.

Lee has spent the afternoon whipping up a few cocktails to take Georgia around the world. Matty is unimpressed.  Since the demise of Rhys and Sam, he is the new King of Gimmicks don’t you know and he throws a wee tantrum about it.

But it is Jake who emerges as Mr Smooth at this cocktail party.  He tells Georgia that he wants to read his challenge love letter to her himself, and at the same time gets to have a dig at Courtney.

“I hated that Courtney got to say my words,” says Jake, all Michael Buble-esque.  Sub-text: Remember how all Courtney could produce was that crap poem like a Rhys wannabe and how my words are all deep and significant and true?

Courtney. What? OK. One. More. Chance.

So Clancy is going. Back to Queensland droving, I guess.  He is very gracious in defeat and tells Georgia that she’s got a good bunch of fellows there. Heck, he’d be happy to date any of the ones she rejects.

And there’s only four rejects to go…