I love the smell of Napalm in the morning.

Hang on.  This is The Bachelor mansion.  That’s not Napalm; that’s Impulse Romantic Spark body spray.

Now I have to admit that I actually had to go to the Impulse website to look up the names of the fragrances. Do you know that it has a catchphrase “Impulse Fragrances for Personality”? Quick! Someone grab a can for Alex! Stat! Unless, of course they already have, and Impulse has a fragrance called Blandidy Bland Bland.  In that case Alex reeks of it.

But anyway, back to the napalm.  This is the episode where Richie breaks out chopper (number 3) and swoops in like Robert Duvall in Apocalypse Now to drop a bomb.  Well, a bombshell. Well, three bombshells.

But more about that later.

The girls are just sitting around and, in a stylist faux pas, four of the girls are sharing the same couch in some sort of Bachelor uniform of grey stripes.  I don’t know who they were, because they all looked the same.

Georgia doesn’t know where she stands and it’s not just because she’s sitting.  I get that.  She’s the last brunette standing…sitting, and that puts her head squarely on the chopping block.  She’s certainly not surprised when Osher arrives with a single date card for Rachel.

Rachel’s off for a nautical adventure with Richie who has put on a brand spanking pair of new boat shoes and an even newer pair of jeans, the latter of which leeches their best Bangladeshi blue all over his hands. Note the tag, Richie: Wash colours separately before wearing. Now you know why.

Anyway, Rachel is impressed with his footwear and even more impressed with the date because Richie works with ropes and Rachel likes being tied up…tightly.  Why, she’s not even half-way up the crow’s nest before she calls for more:

If there’s a boat, there has to be a Jack and Rose moment.  I mean seriously.  Five year-olds do it on inflatable pool dinghies. I reckon I saw those cousins who won silver for Australia in the sailing do it.  And every season of every Bachelor on every boat  everybody does it.  Enough already.

Apparently a new girl has snuck into the house named Nancy.  Alex thinks that there’ll be some sort of twist to the garden party, like when your garden hose gets tangled round your car tyre.  Keira is having none of that:

“Why would there be a twist?  Negative Nancy.”

In other words, of course there is a twist, three of them.  But more about that later.

Back aboard Richie’s “commandeered” tall ship, he decides that since it’s a miserable overcast day that it would be a great idea for he and Rachel to throw themselves off the front of the boat.  Rachel, short of freezing solid, launches herself, firstly off the bow, and then at Richie in a vain attempt to bring her body temperature back up.  In the process she nearly drowns him and punctures two holes in his lungs with her icy nipples.

Back on board, Richie opens the hold where he has imprisoned a rum merchant.  They sample a few of his wares.

“Woah!  That rum was like being slapped across the chops with a salmon,” sums up Richie.  Fun.

Suitably stinky-breathed, he serves Rachel up some cheesy-lines…I mean some cheese and wine.  For one fleeting moment I thought that Rachel was actually going to eat a bit of camembert, but no.  Predictably it remains untouched.  Just as predictably, Richie whips out a rose and gives it to her, because she could be “the one”.

Back at the house, Megan has realised that every girl that has gone on a one-on-one date comes back with a rose.  That means that THE ONE is actually SIX and she’s not sure she likes that.  I’m surprised Keira’s OK with it coz I thought she was well a truly over all that polygamy shit.

In no time the girls are out for the garden party.  Especially Kiki’s girls which are barely contained behind some sort of flesh-coloured bodice.

It’s all a sea of floral and lace and Jimmy Choos stuck six inches in turf. And plenty of Bollinger.  But no Richie.  Where the hell is Richie?

Well Richie is standing in the bush all dressed up for the garden party in his best flannelette shirt when Osher walks out of the scrub and tells him that he’s going to be spending the day with three new girls, all apparently outdoorsy types, and you know, if Rachel’s not the one, and the other nine aren’t the one, then maybe these three could be the one.  If Osher just keeps throwing more girls into the mix, this series of The Bachelor won’t finish until Alex’s kid graduates from high school and moves out.

So these three girls have a lot in common.  They’re up for anything, they all have a penchant for horse power (in one case, literally)…and they’re dopplegangers for three of the girls already in: Faith, Nikki and Rachel. Alright, Steph, Sarah and Khalia are slightly uglier doppelgangers than the originals, but just attractive enough to ensure that the fur flies.

Khalia is a human rights law student. What would be more natural than to go on a program where thirteen women are locked up in a house, only allowed out on the cryptic invitation of one absent man and where every last ounce of human dignity is stripped away? She must be doing this experience as research for her thesis.

Back at the garden party the girls have noticed that Richie still hasn’t arrived.  Rachel decides to throw caution to the wind and chomps down on a canape. But Keira has had enough:

“Richie’s still not here!” she shrieks. Balls will roll.

No, literally, balls will roll.  Or at least boules will.

Alex (rocking dark beige) and Megan throw caution to the wind and step onto the grass in heels and chuck a couple of bocce balls almost like they know what they’re doing. They don’t collect the balls though, because they are stuck in the lawn. “Richie is like the white ball,” ponders Megan and Alex uses the word “analogy”.  Knock me over with a feather.

Meanwhile, Richie goes quad biking with Steph.  She has a lot of the qualities he likes in a woman…which would be that she is a woman.  Turns out she’s doing a double degree in in bio-medical science and shameless flirting.

In the mansion, the girls are still lamenting Richie’s absence from the worst garden party ever. Noni says that the girls have eaten all the cakes.  I’m pretty sure Noni has eaten all the cakes, but they have all had a decent crack as the bubbly and a couple of them are starting to look a bit shabby. But,not ever elegant Olena, even though she is decidedly UNIMPRESSED.

All of a sudden the girls are startled by the sounds of a helicopter, and that can only mean one thing…Air Show!  Ocean rescue!  Black Hawk Down!

They all rush out to greet Richie.

The intruders emerge from the helicopter and Alex just about chokes on her strawberry. Or maybe that’s just her adam’s apple. Something is bobbing up and down her neck.

Alex has had enough.  She pulls out the beige frock, the red glass and the white rose and drags Richie off to their love turret. Whatever happens up there is so boring the producers don’t even bother to air it.  All the action is happening in the lounge room.

Noni, Kiki and Georgia (aka the ones with no chance of winning) decide they’ve got nothing to lose and make friends with the newcomers by telling them how much of a bitch Keira is.  Georgia, like all best friends (in Year 9), dobs. Keira starts rolling her lizard tongue and calling everyone fucking bitches.

Keira goes to the bathroom and Kiki goes with her.  Cue the meltdown. “Peasant!” screams Keira.

“Pheasant?” thinks  Kiki. “But Olena has the feathers.”

Osher comes in. He congratulates Rachel on her rose…like going on a single date with Richie and coming back with a rose is some sort of Herculean accomplishment. Then he delivers his devastating news that there are still twelve girls left and only eleven roses.  Shock waves shake the foundations of the mansion.

Richie: “Megan.  Will you accept this rose.”

I agree. Richie.  You have fucked up.  Seriously.

Georgia is gone in the most scandalous case of rose-gate I have ever seen. Eleven roses minus five divided by the square root of…um…times…plus one plus six equals eleven. Twelve girls minus one equals eleven. That’s one of those equilateral equation arithmetic thingies. Megan didn’t accept the rose,  Osher must have sneaked back in and pinched another one.  Dog act, Osher. Dog act. Don’t sit next to Georgia during the reunion show.

And so goes the last brunette.  Let’s let her have the last word. 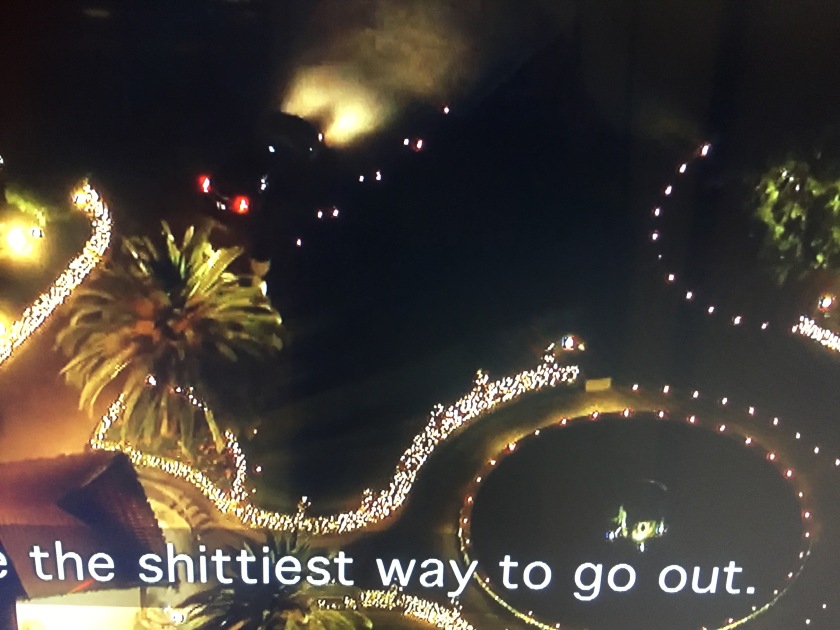 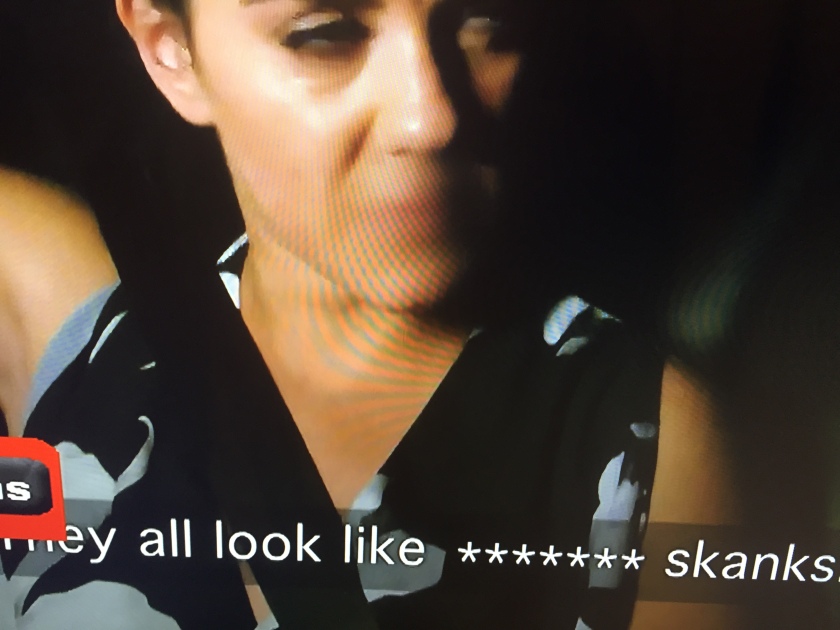