Twenty in, two out, eight in.  Thank god there is an astrophysicist to keep track of all the Maths.

The morning after the cocktail party, the girls ae sitting around contemplating when the first dates will be.  Emma, the stage five clinger is desperate for one.

“She’s acting like a fool,” says  the one with the pneumatic lips who rocked up to meet the Bachelor in full wedding regalia complete with bridesmaid.

As if on cue, Osher arrives to deliver a date card.  The clue says something about not speaking the same language and Kristin assumes that it must be her, because she speaks Chinese.

“I speak Chinese,” she says, again, and it’s clear the other girls are sick of her patronising fèihuà.

But of course there are at least two other girls in the house who speak in tongues, and of those, Matt picks Sogand for the date. Mary sends her off with a warning not to touch her future husband. 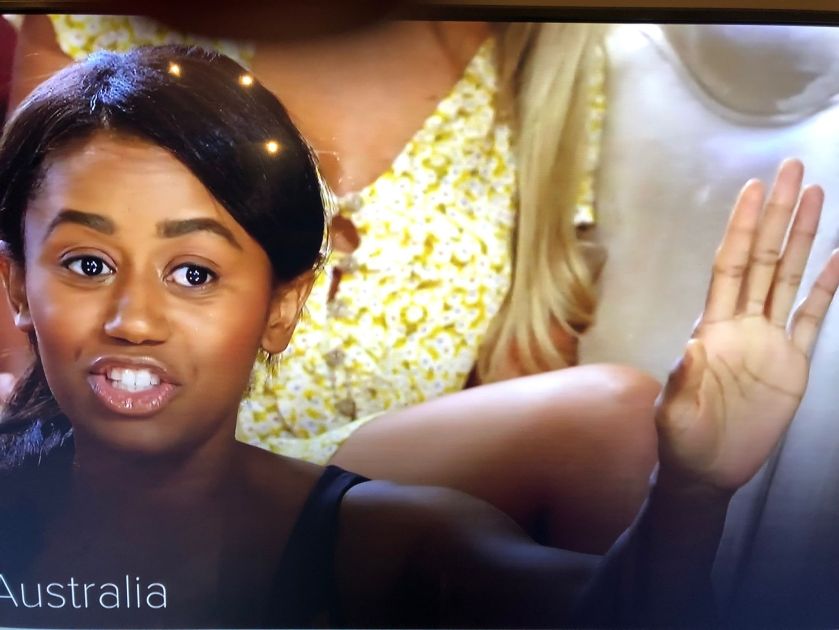 Matt has chosen a date for Sogand that minimises the opportunities for conversation – a noisy helicopter ride, a trek through the bush and a strings concert (which could just as easily been set up in the llama paddock and saved the expense of the helicopter).

I get it.  Arguably one of the most beautiful birds on the planet is the peacock, resplendent in its plumage and regal in its gait.  But then one of them gets itself stuck up a tree outside your bedroom window at 1:00 am and it starts its blood curdling sqwark and you want to grab the nearest rock and club its brains out.  Sogand is like that.  She scrubs up alright, but then she opens her mouth and she has the voice of a teenage boy who’s only dropped one testicle. Especially when she’s excited, like when Matt pulls a rose from under the couch cushions.

She tells Mat that she hasn’t been in a relationship for seven years and her break-up was a painful, family thing…and you can just stop right there, Sogand, because none of us want to know where the bodies are buried…and thankfully she does.

Back at the house all of the girls are aware that it’s late.  Sogand walks in waving her rose in front of her.

“She’s so smug,” observes Nic-hole, which is kind of the same as a Veronica telling the other one she needs to eat a steak. “And she wasn’t wearing that frock when she left.”

But I have to admit it, Nic-hole appears to be right. Far from being demure, Sogand tells the girls that there was lots of touching and multiple kisses.

I counted two, which I guess technically is a multiple number, but it was really only one-and-a-half, and the half bit looked more like an attempt to get rid of a stray bit of spittle that Sogand had left on Matt’s lips.

“And I get to keep the dress!”

Being a blabber mouth is a really poor decision, because she has given the grade five clingers like Emma and Mary reason to go completely mental and has made herself a target for Nic-hole. And don’t be surprised, Sogand, if  you wake up to find that dress in bed beside you…with a llama head in it.

Luckily, the next day, Matt arrives to pick up all the girls for a group date, but really it’s a canny plot for Osher to bring in eight more skanky moles  contenders for Matt’s heart.

After a huge day of shooting marshmallows at targets, none of the girls are really in the mood to deal with Osher’s silly games when they see him outside the mansion. Except maybe Chelsie who earned herself a rose for no descernible reason.

Osher delights in telling them that there are eight new girls in the house, which makes the originals sound a bit like may flies: twenty-four hours and they’re done.  Side note – I did a bit of research on the mayfly and according to one website “…Mayflies spend most of their lifetime as nymphs. The only purpose of mayflies is reproduction. Within this short period of life, they form groups and dance together on all available surfaces.”

I know, right?  Sounds just like a typical cocktail party.

And with that segue, it’s time for the cocktail party.

The first new girl, Julia, rocks up with bad posture, a squinty face, a ukelele and a weird little song about journeys and lives together.

“Oh my god!  Your voice!” exclaims Matt, almost simultaneously with me as I try to stuff toilet paper into my ears to drown out the sound.

Next in is Monique.  Monique, in the eloquence of Mary, has “all the boobies, and Nic-hole looks down at her own chest and has to admit that she does not. Nic-hole wants to find the opportunity to accidentally punch Monique in the face, and maybe rip her tits off for good measure.

And yet Matt and Osher persist in addressing this group as “Ladies”.

A few more parade in before Tara arrives and I am only interested in her because I scored her in the office sweepstake and I now know I can kiss that two dollars goodbye.

But at least I didn’t score the cheerleader chick with the lips that peel back over her teeth like a dog who had its head out a car window when the wind changed.

And then it happens.  Another Persian arrives and Sogand goes apoplectic. Touché, producers.  Touché.

Sogand downs a gallon of wine and starts ranting about fairy floss.

Nic-hole has had a bit to drink as well and is insisting that Monique is her doppelganger when there are actually about a dozen girls that are all doppelgangers of one another, and any one of them looks more like Monique than Nic-hole does.

Luckily, before she can totally implode, all of the girls are called to the rose ceremony. But holy shit, six of them are leaving tonight.

“Holy shit,” says Mary, realising that no-one in Bachelor history has ever had to count that high before.

The pressure is clearly on Matt too. For reasons known only to him, he picks squinty little Julia, and busty Monique and then the weird Cheerleader girl and then Jessica with the tatts and thank god, he finally picks Emma, so we can all sleep tonight. But he doesn’t pick Danush and that is a bitter disappointment to me.

He also ditches a pile of the blondes whose names we never bothered to learn, but he kept crazy, over-the-top-my-face-is-a-barometer Mary. We know she won’t win, but it’s going to be great to have her around for a while.  There’s just something about her…