It’s the morning after the night before and all the boys are sitting around evaluating the cocktail party.  Brett sums it up best:

“Last night was gnarly.  So many blokes going at one bird.” And just like that he manages to conjure up the image of a group of lions gnawing on the carcass of an ostrich.

It must have been a pretty rough night, because Jourdan, who was inexplicably limping about for half of last night’s cocktail party, is now sporting a moon boot.

“I had a little accident on the basketball court,” he explains, which is next to no explanation at all.  I’d be more inclined to believe that he stood on the end of his scarf as he was ascending a flight of stairs. 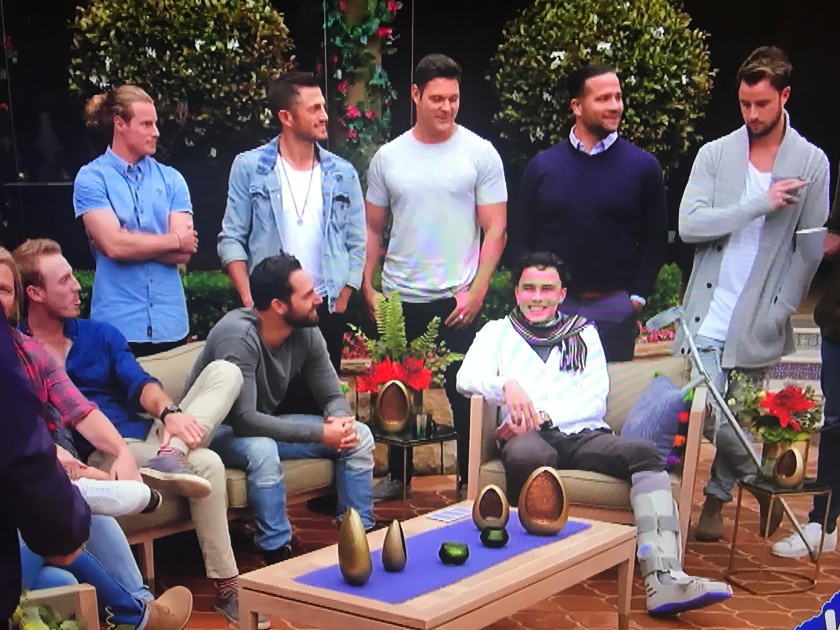 Osher soon arrives with a date card in his hand.  It’s a single date card, so Uncle Sam of the Double Delight rose assumes his name will be on it, and is most aggrieved when Jared’s name is read out instead.  This appears to be the start of Sam’s descent into total tool-dom.

Sophie is very nervous about going on a date, because she hasn’t been on one “in years”.  So rather than work her way back into the social scene by taking in a movie in Gold Class, she decides to set up an ultra-high ropes course between two of the lighting towers at Spotless Stadium.  It’s the perfect date if you aspire to be in Cirque De Soleil, but pretty stupid for one who is scared of heights.

No worries, because Sophie has a cunning plan in inviting Jared along for this date.  He was in the army for twelve years, so her logic is that he will be her protector.

It’s about this time that Jared confesses that his twelve years in the army were spent in supply detail handing out toilet paper and that he is “shit scared of heights.”

So much for her protector.  I must say, though, that it is very reassuring to FINALLY see a bachelor/ette who is honest about their fears.  Matty J was like, “Hey, we’re going to throw ourselves head first off this building” and Georgia was into aerial trapeze and abseiling from cable cars. Sophie is real and it’s raw.

Having scaled the tower, strapped herself to both the wire and Jared and inching herself across the gap, she loses her seat and her shit at the same time and forgets which program she is on.  “I’m a celebrity.  Get me out of here!” she cries and Jared, only too pleased for the horrid ordeal to be over and relax the brave face he has been putting on, helps her back to the tower.

Soon they are both safely back on the ground, where The Bachelorette minions have busily been setting up a floral gazebo while Sophie and Jared have showered and changed. They calm their nerves further over a couple of glasses of champagne and Jared tells Sophie that he treats a woman like a queen.

“Not over the top.  But I open the door for a woman.  Car doors AND restaurant doors.  Both kinds.”

Well one of Sophie’s exes used to slam the door in her face, so this is a definite step-up and one which is worthy of a rose, and a pash. She can’t believe that she has developed such a strong connection with Jared already, but mind you, a death-defying experience might just do that to you. 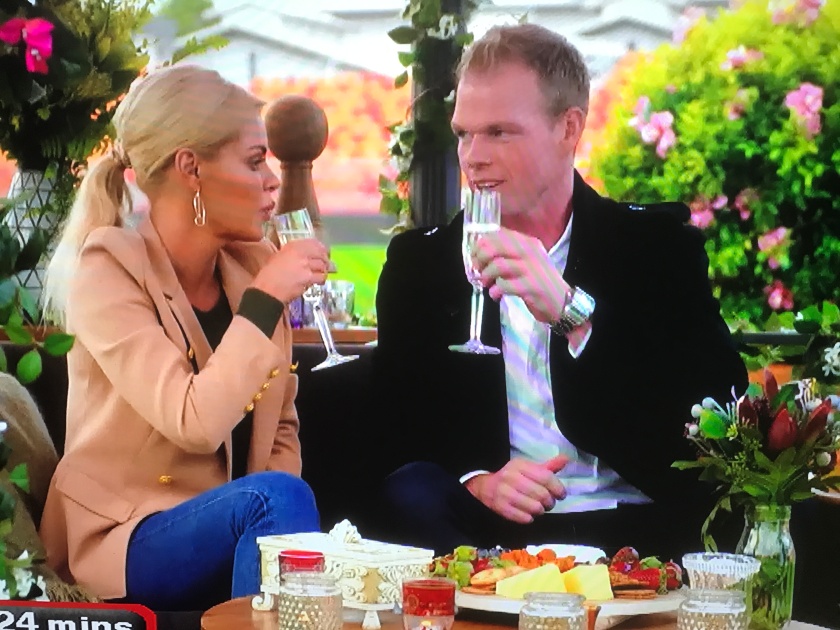 Back at the house the boys are sitting around pretending to be playing cards, but we know this is not the case because no group of boys ever sat around a card table drinking Fiji water.

It is all a ruse to stir up Sam because Jared is off on the single date and he isn’t, and reminding him how long Jared has been on the date, but just as Sam is about to lose the plot, Jared walks through the door.

“Maaaaaaaaateee,” they chorus as Jared walks in.

“Maaaaaaateeee,” Jared responds as he whips the rose out of his pocket and waves it under their noses. He then begins to give them all a lecture about how to date Sophie Monk, because he is now an expert.  It is weird that he would want to share these tips with fifteen men who are vying for the attention of the same woman, so he is either clueless or scheming, because it further agitates Sam.

Sam reminds us again, and it will be one of about twenty-seven times in the episode, that he has the Double Delight rose and he hasn’t even had a single delight date yet.

At least the next day he finds himself on the group date, but he’s not happy about that either.  The theme of the date is “Great Lovers from History”.  It’s a photo shoot that is going nation-wide in Newscorp papers, but since none of these blokes are there for fame, none of them care about that (cough).

First up is Apollo who is playing Ares to Sophie’s Aphrodite, while Ryan and Harry are flitting around as cupids.  Ryan says that had he known he’d be playing cupid all day he wouldn’t have bothered to come, but his sour-grapes probably have more to do with Apollo who has six-packs on his six-packs which Sophie can’t help but touch, and it’s all that the bespectacled Arts editor for Newscorp can do to stop himself from doing the same.

No doubt they make a photogenic pair, but whether Ares and Aphrodite stand as great metaphors for the relationship Sophie says she is looking for is dubious. Ares carried on a long-term affair with Aphrodite, but she also had dalliances with Dionysus (the God of Wine – like Jared?), Poseidon, Hermes and Nerites, before her husband Hephaistos kicked her scrawny arse to the curb.  Given that loyalty and trust are two of the qualities that she is looking for, it seems a strange analogy, but maybe Sophie doesn’t read that much.

The second shoot sees Sophie as Maid Marion to Sam’s Robin Hood and James’ Friar Tuck.  It’s almost exactly the same as the classic tale, except for the bit where Robin tells Marion that he can see her tits and the Friar tells him to pull his head in.  James is funny and engaging in his role, and he doesn’t seem as short, perhaps because the friar’s costume is as wide as he is tall.  Sam gets his nose out of joint because he is being upstaged by a fat guy. 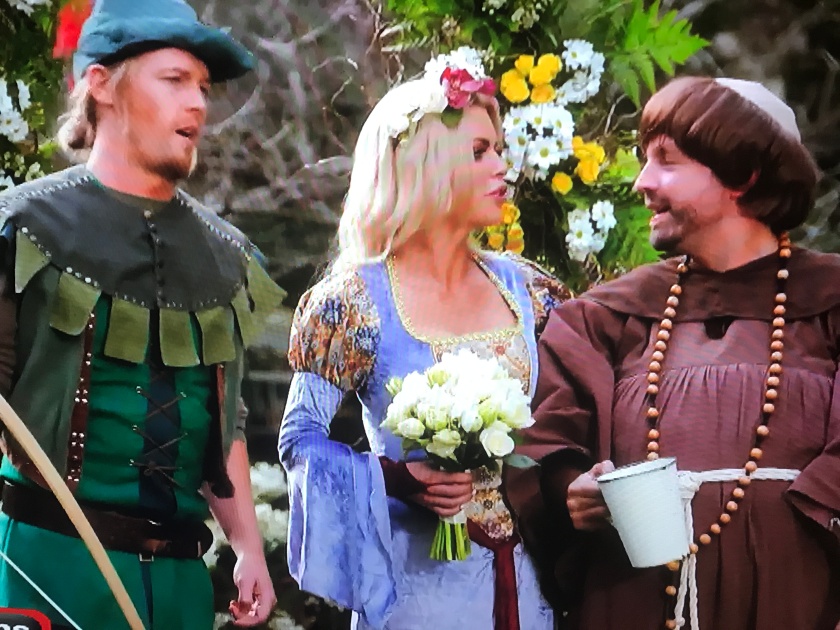 Next is a Bonnie and Clyde scenario where Jourdan stands in one position and throws Osher dollars over his shoulder.  Meanwhile Brett, Hayden and Bingham hover around in the background dressed as Keystone Cops.  If you didn’t know the story of Bonnie and Clyde, from the amount of chemistry generated here, you would think that Bonnie was Clyde’s mother.  It also just goes to prove that you can’t make a moon boot look sexy.  And Bonnie and Clyde ended up as two bullet-riddled corpses, so that’s a choice metaphor for happy endings. 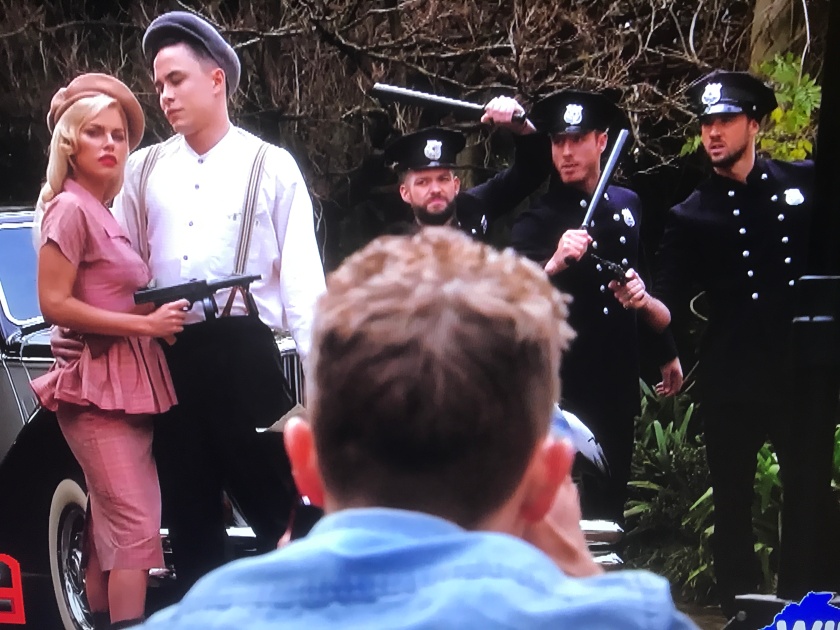 The last shoot is a one-on-on shoot where Sophie is Eve to Blake’s Adam, another cheery little love story where Eve tempts Adam with the fruit of the devil and instead of God just going about making peeps to populate the Earth, he kicked them out of the Garden of Eden and told them that they could just bloody well populate it themselves.

But this date is less about fruit than it is about buns, Blake’s buns specifically, which he proudly flaunts in his fig leaf g-string. 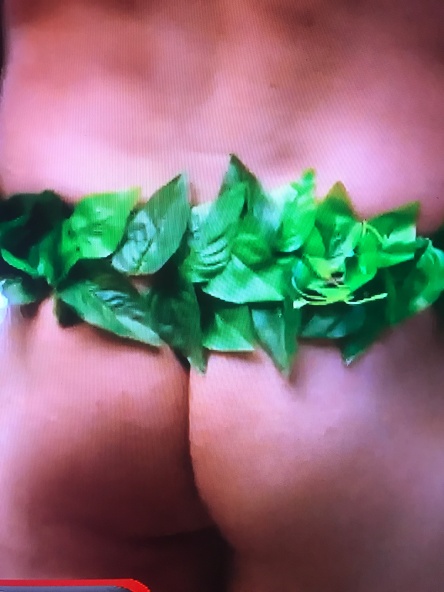 Sophie says that this is the hottest photo shoot ever and Sam starts acting like a petulant child, and I am beginning to think that maybe Sophie would have been better off dating one of the twelve-year-old nephews.

There is no one-on-one prize for the one who was the most photogenic, so we are soon back at the mansion for the cocktail party.

Sam seems to have gone almost completely mad, just muttering “Double Delight” over and over again.

Sophie appears, a vision in blue, and the men rush at her in a mob.  She manages to sit on a couch in the middle of them and Jared offers her his jacket.  She says that she is right, and then Jefferson asks her for a chat.

Jared is a little affronted, and apologises to the fellas, but “Maaaaatteeee, I’m going over there to talk to her.”

This does not go down well with any of the other men, because Jared intends to break the cardinal rule: you don’t talk to the Bachelorette at the cocktail party if you’ve had a one-on one date.

But Jared does, and then he does the unimaginable…

…he produces two pairs of Ugg boots, his and hers, from where he had them secreted in the garden.

Honestly, there must have been a sale down at Mr Sheepskin’s Ugg Boot Emporium.

“Well I had already bought my Ugg boots BEFORE you gave her your Ugg boots, so maybe you stole MY idea!” retorts Jared, who puts on his pair and marches around the room with them.

They have both missed the point though.  Sophie may be a self-confessed bogan, but there are more bogan gifts and they are just lacking in creativity.  Why not a six-pack of Four ‘n’ Twenty pies and a motorised esky?

It all turns quite ugg-ly and a bit of tarnish appears on the shiny exterior of Jared.  And Sam’s not looking so glossy either.

James, Brett and Luke all get roses.

Pete, Harry and Mac all get blooms. 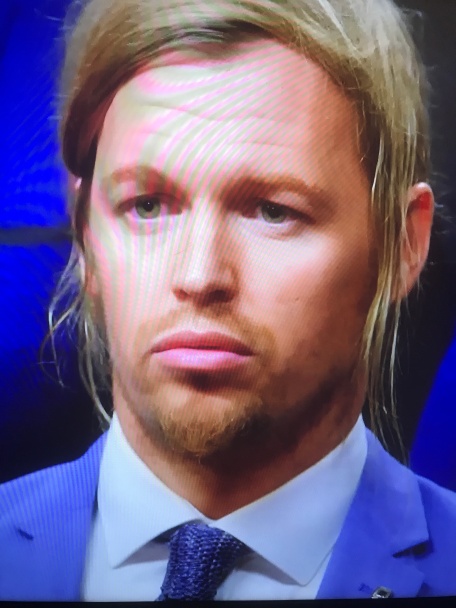 Sam is a desperate sweaty mess when his name is finally called, and Hayden, Jefferson and Bingham also get roses.

That leaves Jourdan roseless. Ugg boots signify love, but a moon boot is deal breaker.  He hobbles over and hugs Sophie before leaving to hobble across the lawn: One moon boot, one red shoe and zero socks.

See you next week.