I’m not sure what went on after the cocktail party last night, but no drilling of Todd took place, because they have saved that for the morning after.  Matty is still all territorial, all the more so when Toddy actually thinks he might be on for the one-on-one date with Georgia.

Thankfully, Osher arrives to end all the speculation and Cameron gets the date.  Cam’s a fireman, so he knows an emergency when he sees one, and if he can’t get out of the friend zone with Georgia, it could be a Code Red.

Poor Cam has to make his own way to the date.  Georgia has laid a carpet out in a field, the first step in recreating Aladdin, before pulling out…the helicopter (flying carpet…get it?).  I’m not sure which Disney film featured a helicopter, but it drops them off in a paddock full of fifteen Dalmatian puppies.

The sloshing sound you are hearing right now is of a heart melting.  It may not be Georgia’s, it may not be Cam’s, but it could 100% be mine.  Is there anything sexier than a man covered in puppies?  It has certainly sparked something in Cam, who thinks he would like to get closer to Georgia’s puppies; definitely not the thoughts from the Friend Zone. 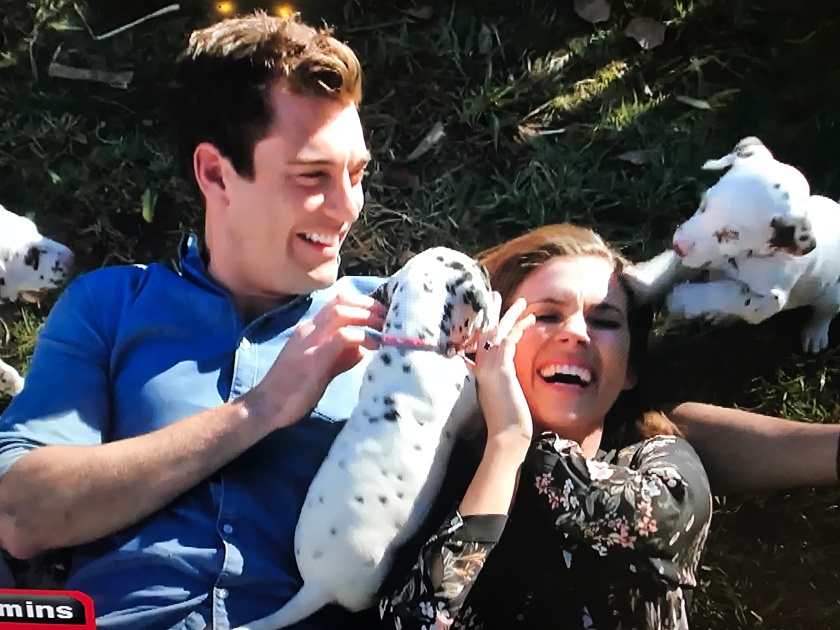 Totally covered in Dalmatian DNA, they retire to a couch in front of an open fire. There is much gazing into each other’s eyes and for a moment it seems like Cam has been coached in the art of amour by Courtney, but eventually their gaze breaks and they kiss.  It’s either the longest kiss ever on The Bachelorette, or they play it on a loop.  Either way, Georgia is feeling butterflies.

Is it hot in here, or is it just my jealous, jealous heart?

Georgia thinks it’s a good kiss too, probably even more so since she is there, but she breaks away long enough to produce a rose.

Back at the house, Rhys reads the group date card. He adds his own embellishments to the reading of the card to make it more poetic.

Todd gets to go, but Matty doesn’t.

The rest of the boys get to participate in an extreme INTERNATIONAL sports competition (assuming that international means Poland, China and Turkey), and their testosterone levels almost blow their puny little brains out.  Luckily Matty isn’t there because Toddy is picked as the red team captain and that would have reduced him to a wailing foetal mess. Sam is the blue captain and he says he won’t be picking any peanuts, then incongruously picks mini-Heath, Ryan. I was sure that at last night’s cocktail party, Ryan was a peanut.  I obviously misheard.  Ryan must be a pretzel.

It really doesn’t matter too much because the important thing is that Rhys and Sam are on opposite teams.  The first EXTREME sport is a Polish-Chinese dragon boat race.  The two teams sit facing one another in the one dragon boat and then row against each other to be the first to cross a line.  It’s like tug-o-war in a boat, and there are plenty of qualified tuggers here.  They all start rowing madly (honestly, I can’t imagine for the life of me why Red Bull hasn’t added this to their list).

Toddy’s red team manages to win.  It’s a hollow victory, because they all get to compete in the next event.

Oiling up for Turkish wrestling.

Only one member of each team is able to participate int the actual wrestle; the Reds elect Rhys, but as much as we want a slippery showdown with Sam, the Blues elect Osher-Matt.

This is sad for the women of Australia, because Osher-Matt spent all his grooming budget on teeth whitener, which left nothing for the rest of the man-scape.  In the ensuing wrestle, Rhys gets himself tangled in Osher-Matt’s chest hair, Osher-Matt pushes Rhys out of the ring, and Rhys hurts his little armsie. Diddums.

Just when we thought that all the dates were over, another card arrives, and after much teasing by Clancy, he puts Matty out of his misery and tells him that he is going on a one-on-one date. This has “quit your whining” written all over it.

Because Matty does the worst British accent ever, Georgia decides to take him to play croquet.  Matty couldn’t be more excited if she told him she wanted to be ravaged on the lawn.  He thinks that Georgia has planned the best date ever.  Kudos to Cameron for being discreet about the puppies. 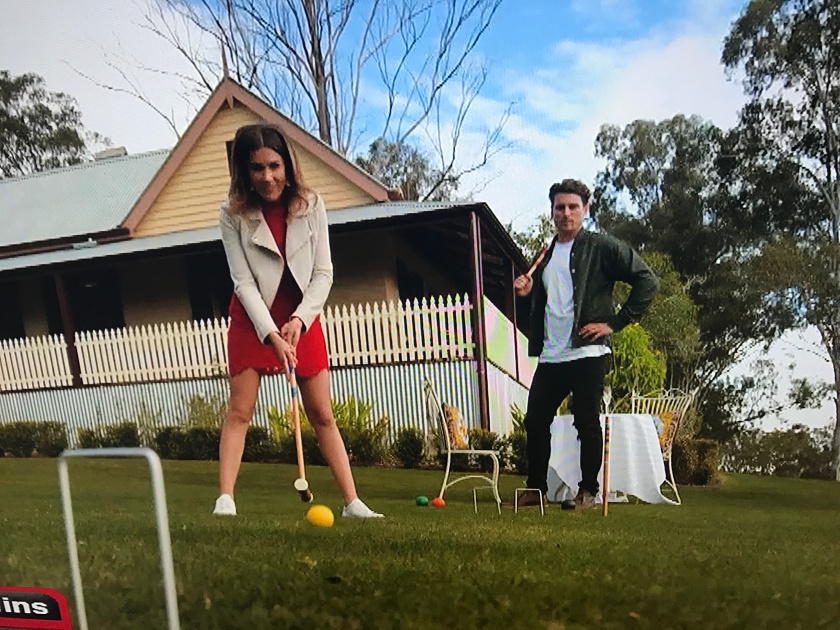 So after a rigorous afternoon of another sport that Red Bull rejects, a couch magically appears and Georgia asks Matty to fess up about the craziest thing he has ever done on a date, and lacking imagination, he says kissing a girl in front of a million cameras.  Ho hum.  Georgia kisses him.  She says there’s a spark, but doesn’t produce a rose.

Georgia calls Rhys aside for a chat.  Hearing that he now has his arm in a sling, Georgia has borrowed one of Matt Preston’s kerchiefs to make him look more classy. 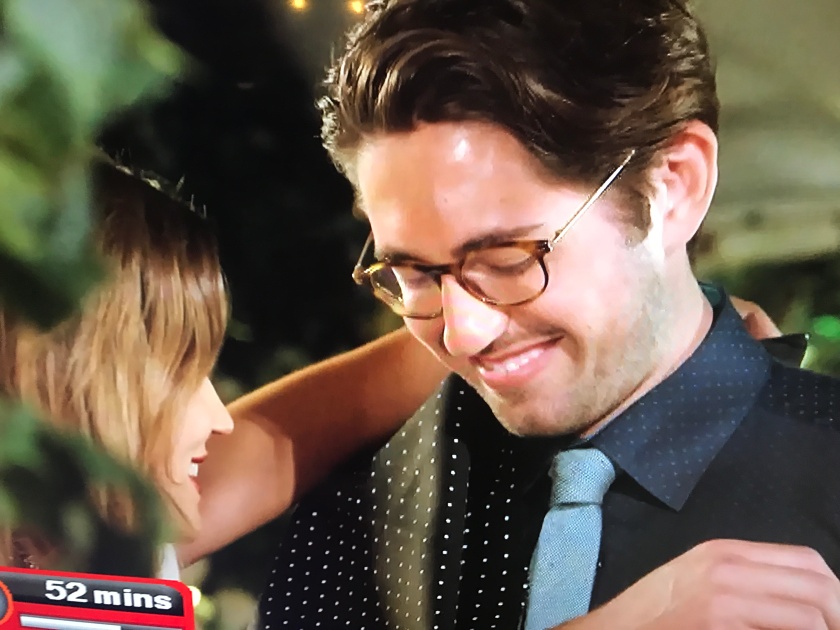 Sadly, Rhys has injured his wanking hand and not his poetry one and he produces another of his masterpieces.  I never knew that Foxtel had a built-in “shit poetry detector”, but apparently it has. The signal mysteriously dropped out two lines in and only re-emerged when Rhys was back into his dibber-dobber routine.

“This shit again,” says Georgia.  “Put up or shut the fuck up.” Or something like that.

Thankfully Cameron calls Georgia away, plonks her down on the couch and produces a guitar.

But instead of an Eliza inspired tragedy, Cam has stolen Todd’s instrument and organised a flash mob of sorts to serenade their lady.  Sam’s verse pleads for a single date, Rhys pretends his poetry is a shopping list (funny if a shopping list wasn’t actually more poetic) and Courtney showers them all in penne. 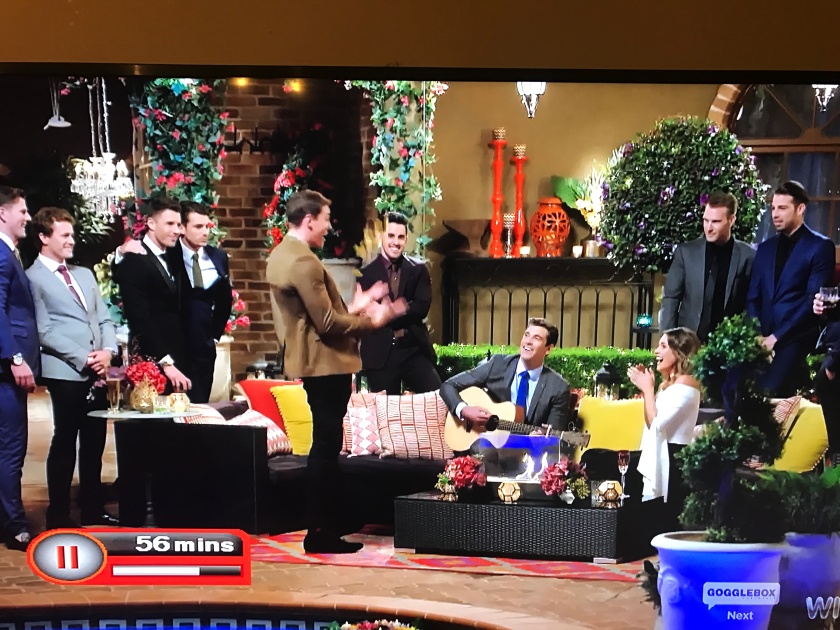 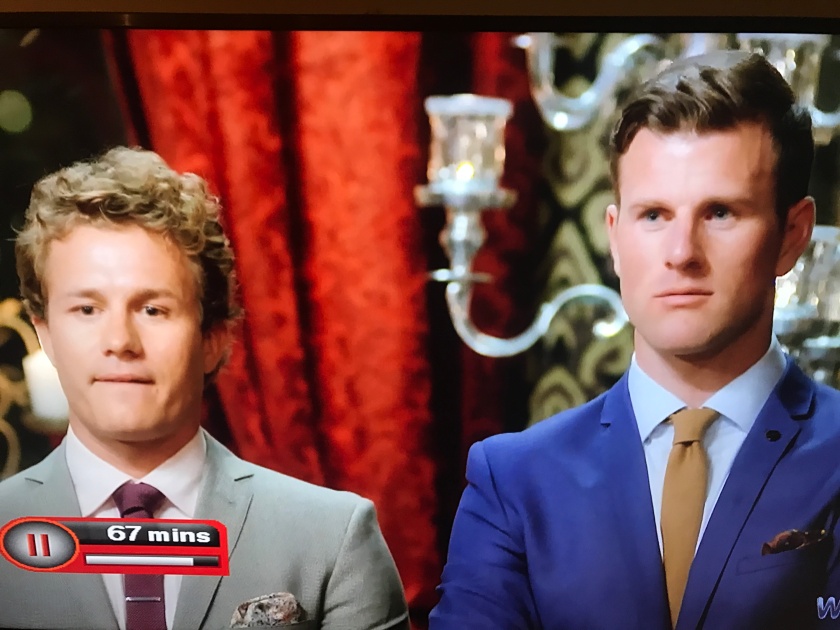 So Ryan, riding on his Heath Ledger looks and the sloppy seconds from his mate, is gone.

I guess that’s what happens when you don’t open your mouth except to breathe for four weeks.

But I couldn’t care less.  I’m sure I will go to sleep tonight and dream about Dalmatians.