“Who could have predicted the journey that Richie would take?” ponders Osher at the start of this episode.

Me, Woman’s Day, New Idea, Nova the Northern Territory News, Babes and Boars and virtually every other media source in Australia, that’s who.  And if the leaks and clues that started half-way through episode one are correct, tonight is a lay-down misère and really begs the question – what has been the point?

Oh well, let’s see, in this DRAMATIC CONCLUSION TO RICHIE’S QUEST FOR LOVE!!!!

Richie has only one date left with each girl, but first, Richie meets up with his sister, Alana and his mother Kate, and they are about to meet Alex.

Alex has decided to emulate Princess Diana in her courting days and has worn a see through dress…without a slip!  Way to make a good impression.  Of course the dress is the least of her problems when after a bit of small talk about her parents’ wedding reception centre, Alex drops the bombshell.

“Of course, I’m a mother myself,” she offers.

Kate’s face curls up like she has been force-fed a shit sandwich and she is momentarily stunned mute.

“It was a bit of a shock, Richard.”  I don’t know about Richie, but I always knew that I was in trouble when my mother used my full name. She fully didn’t expect him to bring home a mother.  How lucky for Alex that Kate she isn’t a reader of New Idea to know about how she dumped the paraplegic boyfriend, or been on-line to see the nude pics.

The encounter with Alex has been so intense that Kate and Alana have had to change their outfits.  Nikki is clearly very nervous, because she’s got that whole upward inflection thing going on again.

Alana, strangely, knows exactly what question to ask.  “Have you ever been in a serious relationship before?”  Imagine that.

Nikki has to fess up about the ex-fiance, and then Mum takes Nikki off for her grilling and asks the best question of the entire series, one which Richie could have used weeks ago:

“Are you a basket case?”

How useful would that question have been when Richie first met Eliza and Janey, and oh how he needed it when Kiera first stepped out of that limo.  It really could have saved him a whole lot of bother.

“Alright then.  Welcome to the family.”

The girls gone, Richie is back on the lounge with Mum and Alana for a debrief.

“You can choose whomever you like, Richard,” says Kate in a tone that screams the opposite. Again with the full name. She may as well have added: as long as you don’t bring home a grandchild.

Grilling over, it’s final date time. We haven’t seen a helicopter in quite a few episodes, so it’s nice to see that he has pulled one out again for the ultimate date with Nikki.  They land in a rice paddy and Nikki somehow manages not to break an ankle wearing paddy incompatible footwear as they make their way to a monkey temple.

“Monkeys have the tightest grip in the world except for you, judging by the way you are gripping my nuts,” says Richie.  And then Richie opens the bag and smelling the peanuts, monkeys soon launch at them from everywhere.

Covered in monkey excrement, Richie and Nikki have a quick change of clothes and retire to a lounge to drink champagne and tell each other how wonderful they are and Nikki can tell him again how totally in love she is and then share the inevitable pash.

The next day, Richie is meeting Alex on board a sailing ship.

Over champagne, Alex brings up all the concerns that Kate had about her being a mother.  Alex decides to bring up problems a child can cause:

“Sometimes a child won’t want to do what you want to,” she giggles.

Yes, Alex.  That’s terrible, but where’s your imagination? What if the boy you haven’t introduced to Richie hates his guts?  What if the Elijah-daddy hates Richie’s guts? What if the boy grows up and watches re-runs of The Bachelor and realises the truly desperate way his mother threw herself at a virtual stranger?

“Being a mother is some sort of an adventure,” says Alex to camera.  Holy sugar-coated parenting, Batman.

They go for a swim and then it’s off to another lounge and they talk to each about how wonderful they are…and…OMG!  Alex pulls out what must surely be the deal breaker! Another God-awful love poem!  I haven’t cringed so much since Bec Hewitt read her vows to Lleyton. Or since Alex read the other poem. Here’s my tip to any future Bachelor/ette contestants:

Unless your surname is Shakespeare, just lay off the fucking poetry.

Dates done, the girls go off to ready themselves for THE DECISION.

Nikki spends about three hours trying to minimise the impact of humidity on her hair.  Alex dons a gold frock.  Well, shimmery beige actually.  Nikki opts to rock the red.

While the girls enjoy the air-conditioning in the limos, Richie bides the time talking in Bachelor clichés with Osher.  Richie is in love and Osher couldn’t be happier, because he had such a big hand in it, counting all those roses and all.

Nikki is the first girl to arrive. Oh-oh.  A sense of impending doom….

Whatever he does, I hope he does it quickly, because her hair is already starting to frizz.

“Nikki. I have to follow my heart…and my heart…is…with…Alex…”

Oh well.  I hope Richie will be very happy.  I just don’t think I can bring myself to watch the next bit.  I will be sure to vomit in my mouth.

And yet, there is a tiny little bit of me that is quietly relieved.  I was so sure that all the media leaks about Nikki being the one would prove to be true, that at least I am pleased that there was some sort of surprise at the end…an awful, awful surprise, but a surprise nonetheless.

“We’re so similar,” says Richie.  Yes.  You both have no appreciation for literature.

And with the gift of a ring (on the right hand), Richie and Alex morph into a single blue and beige being, and above a scrolling bar advertising Fiji water and Sofitel Hotels we bid the happy couple farewell, safe in the knowledge that we can reclaim our lives…until the whole thing starts again on September 21. 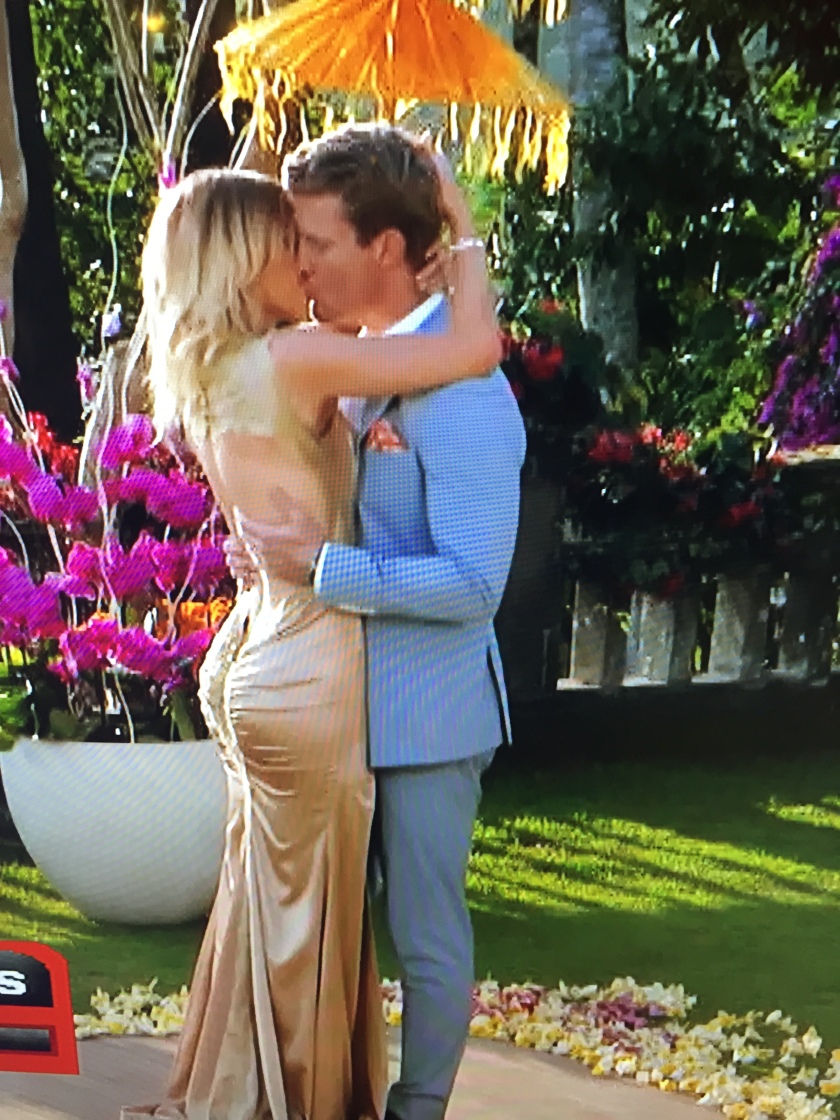