It’s the pointy end now and Richie has been on an emotional roller-coaster and he can’t believe he’s in the position he’s in; which would be exactly the same position as twenty US Bachelors, six Canadian Bachelors, two Nyoo Zilland Bachelors and miscellaneous non-English speaking versions. This is how it goes.  Every time.  Believe it. *

Anyway, Richie has decided that it is impossible to make the most important decision of his life in Australia, so he has flown the girls to Bali on Air Asia business class (ie. above water).

For his first date he is picking up Alex, who can’t believe she’s in Bali: it’s just like that time that NASA said that they put three men on the moon but really it was just a Hollywood set.  Maybe Richie has just flown her around in a plane for nine hours and plonked her down at the Japanese Gardens in Cowra.

Richie says he’s out to show Alex what Bali is all about, but instead he takes her bike riding in a rice paddy. Even those of us who have never been to Bali know that it’s really all about binge drinking, pirated DVDs and “what happens in Bali stays in Bali”.

They sit and have a deep and meaningful, and Alex has finally remembered that being on The Bachelor isn’t all about her and has a passing thought about the impact that her decision might have on her boy, Elijah. But after a half-maybe committal (“It could be possible that I would consider a potential move if that was the right thing after due consideration of all the implications”) that Richie would move to Melbourne, any thought of the boy is gone and Alex’s tongue is so far down Richie’s throat that it’s tickling his Bali belly from the inside.

“There are so many different aspects of how our relationship is evolving,” says Richie.  True.  It’s been through all the important evolutionary phases: rollerblading in sumo suits, blindfolded groping, bathing in a tub of unsold Easter eggs…and now they are at the stage of boring chat under a Balinese gazebo.  Evolution complete.

But there’s not even an uneaten dinner before it’s the next day and Richie is off to meet Nikki who is also wearing a Balinese wedgy-onesie.

Nikki is a veteran of Bali.  She’s been there twelve times. Hmmm…twelve, like the number of years she was her previous and only other one true love.

Richie has chosen an activity because he hasn’t seen Nikki’s adventurous side yet, so being hurled thirty metres into the air on an inflatable mattress is a more sedate way of easing her into Bali adventure than doubling her on the back of a moped through the drunken revellers in Kuta.

“Oooooh!  The flying fish!” squeals Nikki, instantly reminded of every romantic anniversary she has celebrated over the last decade.

Adventure over, they are back at Richie’s Indonesian Bach pad where his house boy, Bruno lights a blessing then bids a hasty retreat.

“You wouldn’t be with a girl just because she’s easy,” says Nikki.

Well that’s not quite what she said, because she’s too nice, but hopefully Richie heard it the way I did and you know…it reminds him what Alex is all about.

Richie is happy about how Alex and Nikki have been so open about their feelings.  Cue Olena.

Remembering how much Olena’s father hates motorbikes, Richie opts to pick her up in a moped with a side-car.  Up there for respecting the father, Richie.

Then he shares another of his passions with her: waxing surfboards.

“My mother has some concerns,” says Olena.  “But we will discuss those later.  Let’s go have fun.”

Richie can’t concentrate on the surf, mostly because he spends the afternoon pushing Olena (who has somehow lost the swim skirt she wore into the ocean) on her board and staring up her crotch.

“I have my parents’ voices in my head,” says Olena.

“He will want you to move to the Perth and ride the motorbikes,” comes Andre’s gravelly tones.

“Did you hear something?” says Richie.

No she didn’t, but his own inner voice is screaming at him. “But if you let Olena go, you have to keep Alex!”

What a fucking dilemma.

Still confused, Richie decides to continue his date into the evening and serves up Indonesia’s finest camembert and bubbles.

“My parents told me that I am living in a dream world but this is the real shit,” says Olena.

It’s awkward stuff, but let’s give Olena some credit here.  She is the only one of these girls who has given any thought to what goes on post-Bachelor. And Richie is thinking that he should pull-out, but then there are those eyes…and that face…and the memory of that red frock… 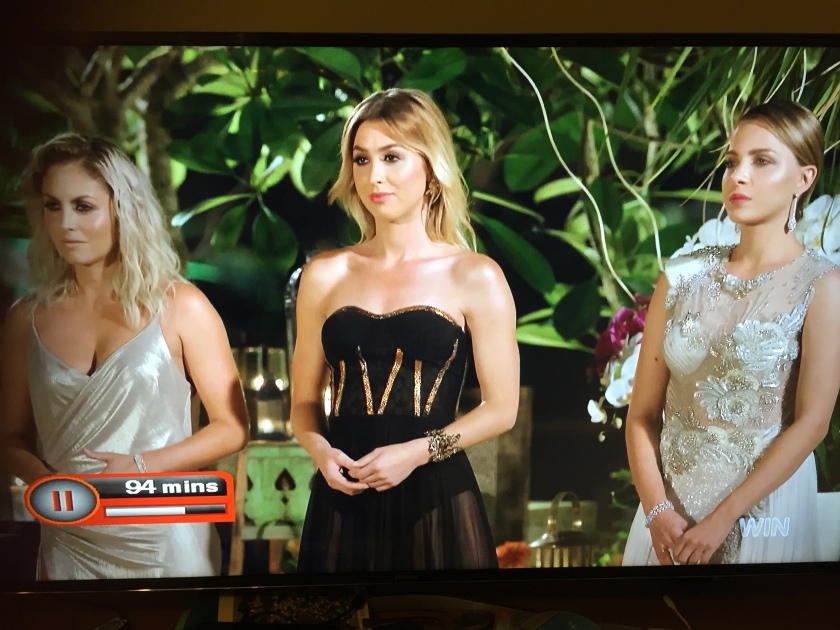 Osher arrives.  There is so little counting to do that Osher actually has to string a few sentences together.  Besides, he was on the Asia Air flight and has to earn his fare ($129 AU…Bargain!)

Richie knows exactly what he has to do:  give out two roses.

“Nikki.  Will you accept this rose?”

“Alex.  Will you accept this rose?”

What a fucking waste of a percussion section.

“It was a great pleasure meeting you,” says Olena, like she’s just missed out on a business deal and she shakes Richie’s hand with the same enthusiasm.

She’s really nonplussed, but now there are only two.  The thought that Alex could be the one hits me in the guts like a dodgy nasi goreng.

As much as I hate all the media leaks about the outcome, for once I hope they are true.

And that Mum will knock some sense into her boy.  See you tomorrow night. 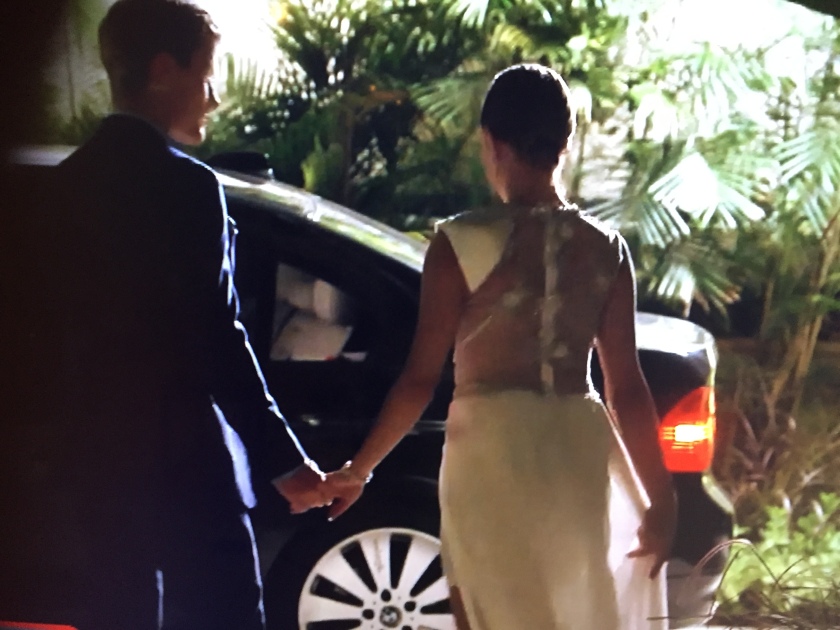 *I know what Richie can’t believe.  There aren’t any overnight dates.  Most of those other blokes got three nights of reality TV sanctioned bonking.  He can’t believe how ripped off he is.