It’s been a week since Keira met her demise and the girl just can’t keep herself out of the headlines:

She was probably just dropping out for a quick soy latte while the ink on her I’m a Celebrity Get Me Out of Here contract was drying.  But the cuppa was not the only newsworthy thing that Keira did in the last week.  Apparently she also wore a black G-string under a pair of leggings.  That’s not news, but here’s something that is: LEGGINGS ARE NOT PANTS.  Post that loud and proud on your front pages, newspaper dudes!

Meanwhile, back at Casa G-string, the girls are blissfully oblivious to Keira’s caffeinated exploits, her barbed farewell in the back of the eviction limo, or the backhanded swipes she made about them while guest quizmaster on Have You Been Paying Attention?

As usual, they only have thoughts about one man…Osher. To ease the tension, Kiki is leading a sighing tutorial on the couch.

Like a scene from The Conjuring, Osher appears.  He tells the girls that in his blue envelope is something that will help them build the type of relationship they hope to find.  Then as he departs, he shoots them their secret gang symbol: Kiki, calm and collected from all that relaxation of her diaphragm, takes control of the date card.  Noni, the only original without a single date, is usurped by interloper, Steph.  For her part, knowing that Richie has a penchant for aircraft in his dates, Steph has already strapped on her parachute.  What else could explain that god awful outfit?

So for the first part of the date, Richie has organised for Steph to be marooned in a yacht, floating around in the middle of the Hawksbury.  Steph reveals that she’s from Ballarat so this boat thing is pretty flash:

“You don’t date in Ballarat!” she says.  “He takes you to the Gold Class.” – which sounds a bit like a date, before the lady is whisked off for a session in the back seat of the gentleman’s Monaro.

All of a sudden, Richie rocks up on a jet ski.  Steph’s mad keen to get Richie’s machine between her legs, but Richie is more keen to have a chat and a glass of OJ.  Finally, she gets to double on the back of the jet ski.  Before you know it, it’s nightfall and they have arrived at some sort of secluded lodge.

Richie can automatically tell that Steph is nervous.  Maybe that’s because someone has stolen all the indoor furniture and he has taken her shoes so she can’t run away. 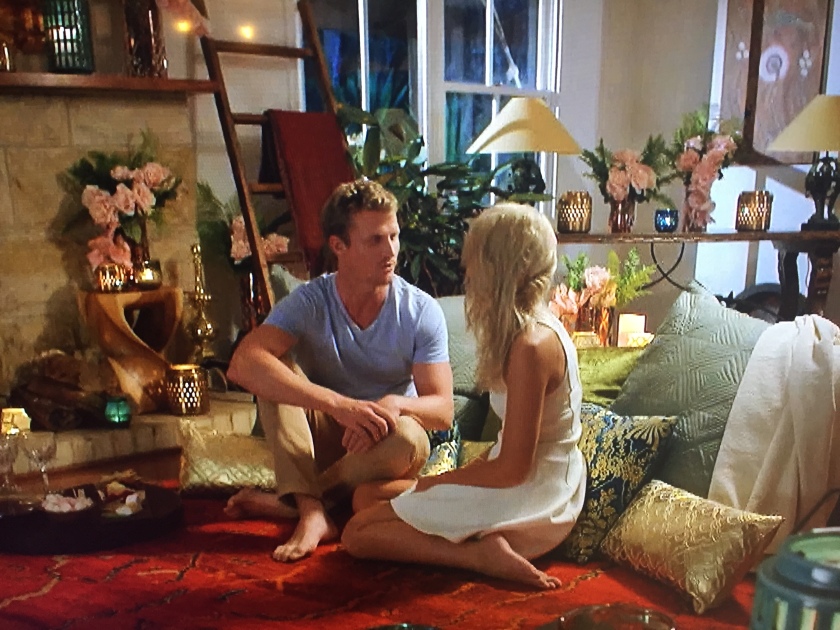 Nothing takes nerves away like priming her with red wine, denying her food and taking away all her creature comforts.  It’s like Richie has used The Taming of the Shrew as his dating training manual. But Richie has something that Petruchio didn’t have: a rose.  Richie tells her that he doesn’t want to take a girl down the garden path if there is no future there;  ironic since last week he took all his original girls literally down the garden path, then arrived by helicopter with three intruders and dumped Keira.

The next day, there is a group date at the mansion.  The girls emerge and there is Richie, and yet another girl.  Sound the alarum bells!  Osher throws his head back in raucous laughter.

“This chick? An intruder?  How hilarious!”

The blonde chick has a similar lip-licking problem to Keira, but it turns out she is a RELATIONSHIP EXPERT and she is here to conduct some tests.  I am not sure as to the credibility of such tests, because she is not wearing a lab coat, and they even wear those at the Ponds Institute. Plus she’s not smart enough to wear flat heels to an experiment conducted on turf. PLUS, I’m making a few body language obs of my own, and judging by proximity, I think the RE wants to jump Osher’s bones.

Anyhow, the RE asks the girls a number of multiple choice questions (that is if two possible answers constitutes “multiple”.  You tailor the test to the ability of the respondents, I guess).

The questions are deep and probing.

“Cats….or dogs…?” quizzes the RE, confounding the girls by offering four possible answers to an either/or question.  But of course this is a very difficult question.  By cat, do they mean Siamese, Persian, Mexican hairless?  A dog could be a bull mastiff or a Chihuahua.  Oh my god!  It’s a trick question.  They might as well have asked how long is a piece of string? Faith, who could barely cope with the “spend or save” question, looks like the silicon chip inside her head is switched to overload.

Then Richie seems to dispense with asking any questions altogether.

Nikki is hopeless at this “guess the letter” game and comes dead last.  By some miracle Faith regroups and joins Rachel, Steph. Alex and Kiki in the second round…the…(drumroll please)…TOUCCCCHHH TEST.  In this highly scientifically proven test of true love, Richie is blindfolded and the five chosen ones each have two minutes alone with him where they must only communicate with touch and no words.  How risqué!  And all while the loser girls get to watch on a monitor.

Faith goes first and dances around like a loon, grabs his pecs and finally goes in for a hug.

And so it goes.  Kiki thrusts her boobs into Richie’s back as a point (make that two points) of difference.  Rachel is as awkward as Faith.

Finally it’s Alex’s turn.  She goes straight in for the embrace, a risky manoeuvre lest her Adam’s apple dig into the soft flesh of his neck and her manly hands grabbing his buttocks give away her identity.

They say that if you are in any sort of competition there is an advantage to going first or last.  In the absence of ANY comment from the RE, I will say that this is the only reason that Faith got through to the next round.  They were all so homogenous, it was like Richie said, ” I’ll take the last chick with the big hands….and….um….the first one.”

The next part of the challenge seems to have come from a shelved TV series pilot:  Australia’s Next Top Potts Point House Maid.  Driving a golf buggy, with Richie blindfolded at the wheel in the guise of an invalid sugar daddy, the girls have to humour his driving as they collect the dry cleaning, pick up the dog from the groomer and parallel park.  Alex gets in the buggy with Richie first. They knock over a lot of cones.  In fact, whoever it was who dreamed up this challenge has knocked over a few too many cones.

Eventually, after remaining unusually quiet about how a relationship shouldn’t be demeaning and embarrassing, the RE speaks:

“I put my faith, in Faith (giggle)!” reaffirming my complete lack of faith in the RE.

For her date, Richie takes Faith down to the back paddock, which is either a long way away, or difficult to access in high heels, because by the time they arrive, night has fallen.

Richie has set up a date making extreme gelato where two guys with liquid nitrogen and syringes whip up some icy treats.  Granted, Richie.  That was really cool. (Haha!)

The inane discussion post-confection is not.  Thankfully we  don’t have to listen too much of it, because surprise!  There’s a rose.

And then it’s cocktail party time.  Alex hasn’t brought her white rose with him… I mean her, but it doesn’t matter because Richie produces one from his jacket.  I swear, I can’t keep track of this white rose rule.  Up in the Love Turret, Richie asks after Alex’s son.  That’s it. (She is not the one – ed.)

Back downstairs, witness the emergence of the new villain:  Rachel.

Richie takes Rachel off to yet another secluded nook in the vastness that is The Bachelor mansion.  He loves talking to Rachel because it’s like talking to a woman.  Given that he’s just finished talking to Alex, I get that.  Further he likes her directness.

Up in the lounge, Alex is also talking about Rachel’s directness to Nikki.

“Rachel full-on told me you’re the chosen one and I’m a mother and I should just pack up and go home!”  Alex bemoans.

“Richie is not a game!”  Well actually, yes he is.

But Osher’s playing the mean card tonight. Eight left, six roses, and poor Noni still not having a single date:

What? Richie, have you knocked over a few more cones?  Kiki can’t take it.  She collapses and vomits into her own hand. 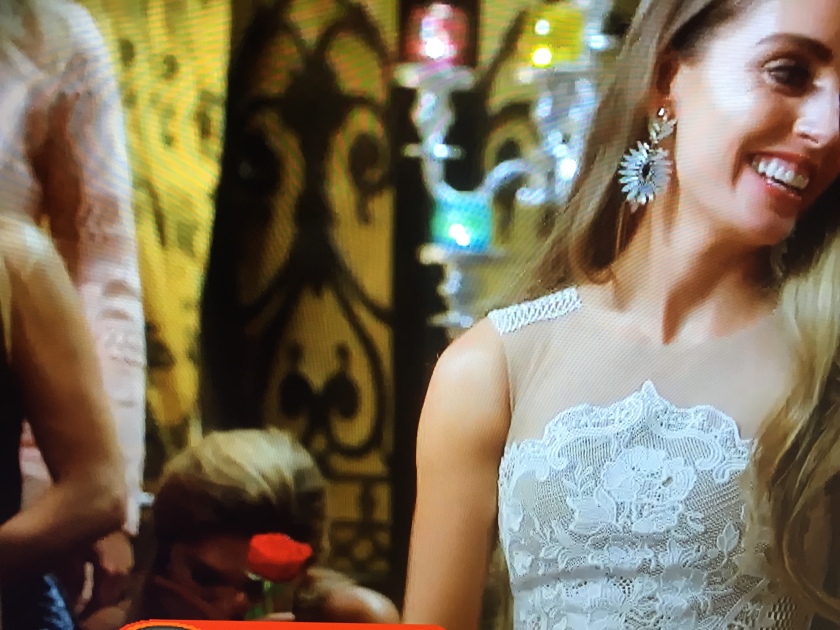 I don’t get this.  Khali’s demise can clearly be blamed on the stylist that dressed her in that hideous faux bridal dress that gave her no shape whatsoever.  But bland, kiddy-voiced Sarah over Noni? I was waiting for her to knee him in the nuts on the way out.

I reckon it was the inability to swallow oysters that did her in. That, or whatever seed Rachel planted at the rose ceremony.

All is not lost though, Noni.  Queensland has plenty of baristas.  An espresso and maybe a bacon and egg wrap to go, leggings and a well-placed paparazzo, and we haven’t seen the last of you yet.