I guess there is a time when every educated woman of certain age should be spending her leisure time reading the classics, organising weekend trips to museums featuring costume collections from ABC television dramas, and tweeting witticisms in response to the boffins on the Q&A panel.

But then there are times when the same aforementioned educated women find the need to turn their brains off for a while, lest they morph into grumpy old ladies with nothing better to do than criticise “these long-haired youth these days” and collect cats.

And for this reason, the television gods invented The Bachelor.

And Keira.  Thank you, TV Gods, for inventing Keira.

But they are soon distracted by the arrival of Osher and his date card.  Keira says she’ll be unhappy if she’s not the single date. Surprise, surprise.  Lucky she wore symbolic black then, because Megan gets the date and Keira gets to be a misery guts.

I have to admit, Megan was my early pick to win the whole thing. Of course that was before I saw Olena in THAT dress.

Regardless, Richie has pulled out all stops for this date.  He really hasn’t done much for the chances of the average Aussie guy.  An average bloke COULD pull off a rowboat and a bottle of champas.  MAYBE he could source a Cadillac and a photoshoot.  But a freakin’ glass platform suspended above a cliff by a crane?  What hope do men have now?

Megan, clipped in by a metal cable at the back of her neck, certainly appreciates the thought that Richie put into it. Hmmm.  That RICHIE put into it.  Onya, Richie; that really is “up there” for thinking.

Back at the house, Keira smugly announces the participants on the group date.  “Let the good times roll” proclaims the date card.  Cue the eye-rolling, which I believe was a misinterpretation of the card.  It’s less of an announcement than an audition for some sort of future career as letter turner on a rebooted Wheel of Fortune franchise.  She’s so slick at it that we don’t even notice that she vomits in her own mouth when she reads out Alex’s name.  The transition is flawless…

“Did someone say….Marja!” gushes Keira.

I have to admit, every time I hear this girl’s name, I think someone is mispronouncing “mother”.    Not that I’ve heard her name very often.  She’s only a few years older than Richie, but she’s OLDER that RICHIE.  It’s only a matter of time before she goes home.  At least he’s gentleman enough to let her go on a date first.

Meanwhile, back at the one-on-one, Megan, clearly taking note of the Olena thing, dons a red frock and Richie takes her off to probably the only art deco Spanish hacienda in Sydney and they have a great chat.  Richie whips his rose out and Megan accepts it.  Then, in an act of premature pollination, Richie moves in for the kiss and Megan offers him her cheek.  Ooops!

Personally, I don’t blame her. She doesn’t really have any idea where that mouth has been, and who wants Alex’s germs?

What could have been a case of “I’ve got the rose, sucker!” resolves itself and take two goes much better when there is a back-up pash.  In the word of the Bard, all’s well that ends well.

That out of the way, it’s time for the group date.  Some of them thought the rolling part would be about Zorb balls.  Keira hoped it would be about roller-blading, because she was the 1993 rollerblading champion or something.  Needless to say, they were all savvy enough to know that there is always a punny twist to the date, so they all dress appropriately for any form of rolling: 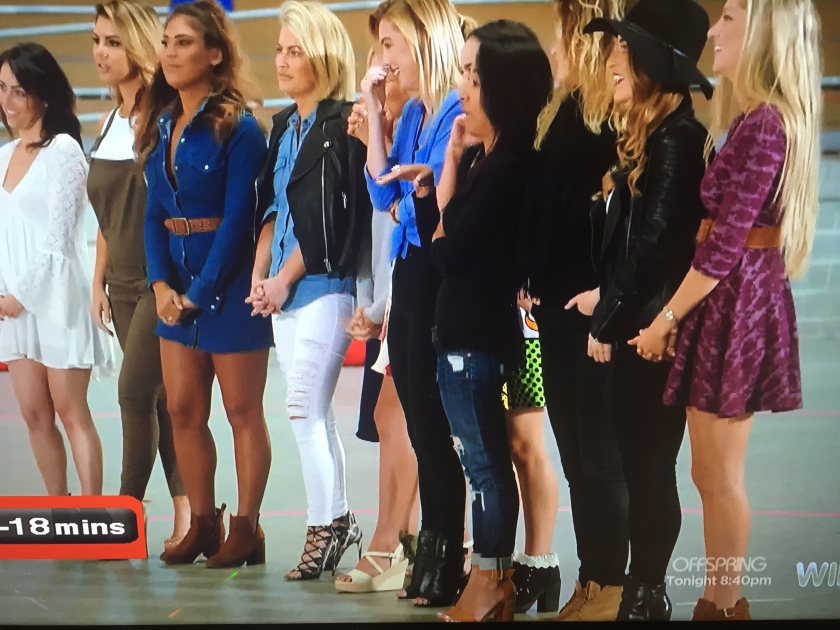 Keira’s confidence is short-lived as Osher introduces the women’s roller derby team to demonstrate how the date will roll.  It looks like the cast of Wentworth has donned their skates and Keira thinks Boomer is keen to roll HER lizard licking date.

Soon the girls have been sent off to change into their skimpy little roller-derby outfits and have been organised into two teams: “Bangers and Smash” and the “Who-do-we-want-Richie-when-do-we-want-it-Crushers”.   Richie, seeing how crap they are at keeping up with something as basic as a team name, becomes concerned for their safety.  Thankfully, he is able to rummage around and find ten enormous testicle costumes, so that they can protect, ironically, their lady bits. 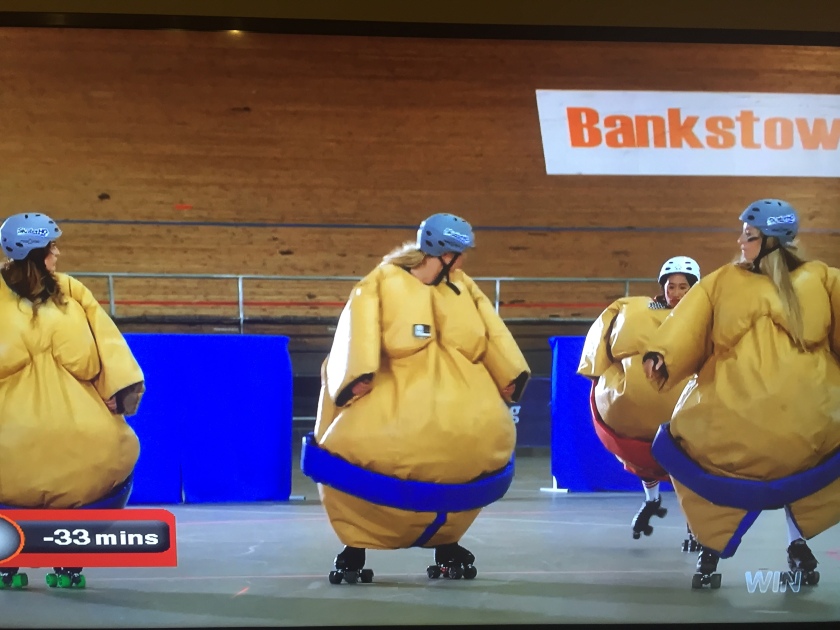 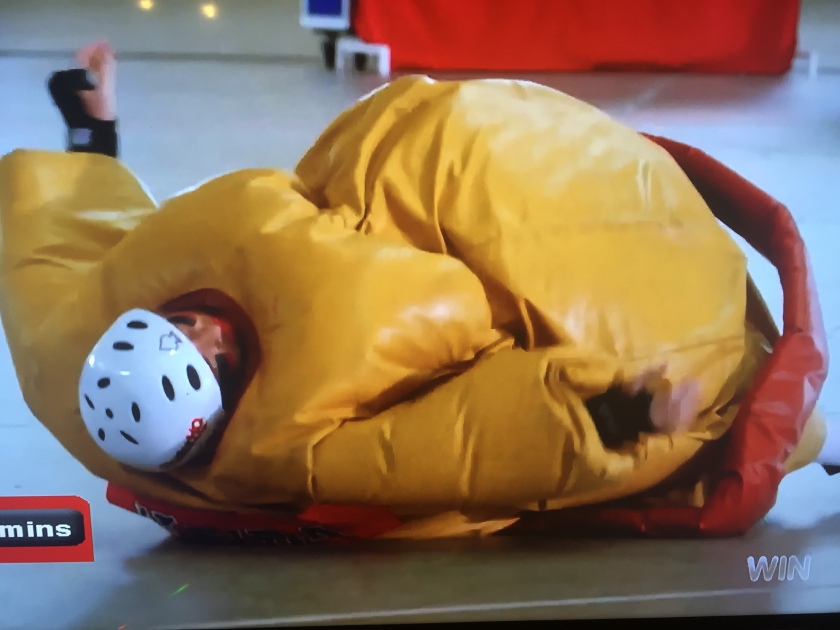 Back on her blades, Keira manages to redeem herself to put the Who-do-we-want-Richie-when-do-we-want-it-Crushers into the lead, which in true Bachelor form brings it down to the final round.  Tolyna, pumps up the testosterone in her suit and knocks down Alex, twice, raising Tolyna in my estimation,  and bringing home the win for Bangers and Smash.

Their prize is the worst street party EVER.  There’s an ice-cream truck and a fake lemon tree set up in the middle of the roller derby rink and Richie soon discovers he’s picked the worst bunch of conversationalists EVER.

Janey’s not competitive. Boy, did she pick the wrong game.

Tiffany waffles on about something inane.

Tolyna, suddenly sounding more bogan than she has in the previous episodes, can’t answer Richie’s question: Who is Tolyna?

No roses given out there.

Thankfully, that means we’re back to the house for cocktails.  This time Keira’s rocking the red (kudos for research), but the whole conversation is all about Alex, the white rose and Megan’s kiss with Richie.  Apparently Megan told Marja about THE KISS, and she couldn’t keep her marja-fucking mouth shut and told Noni, who told someone, who told someone…who eventually told Keira.

“Yuck! Tongue!” she of the ever flicking mouth muscle explodes.  “I don’t want anybody’s sloppy seconds.”

Nor they yours, I suspect.

Soon, Alex grabs Richie by the hand.  She hasn’t brought her white rose with her, so the girls only bring out the half-troll, but then Richie (the clueless bastard) tells her he can choose to take her to the private room anyway, which he does.

Sasha is confident that Alex will not stay up there because Alex is respectful of the other girls.

All is not good downstairs.

“This isn’t high school like where you have a crush on a boy,” says Rachel.  “We deal with this in a mature way.”

Oh. Oh. I’m back.  Just passed out in disbelief there for a second.

“We’re quite pissed off.”

Phew! Now I’m definitely back, and just in time for the triple threat rose ceremony.

“It’s a triple threat,” says Osher.  “There are sixteen of you.  There are only thirteen roses. That means three of you are going home.”

It’s worrying for all the girls who can’t get past the numeracy involved in one-on-one.

And that means Tolyna, Tiffany and Janey, the three deficient conversationalists from the street party are gone.

What does this prove?  Yes, even in the world of The Bachelor, while there may never be a group date to watch Question Time in the House of Representatives, there is room for some semi-intelligent conversation.

In the limo, Janey is very sad.  “I wanted to fall in love with Richie,” she pouts.