A new day breaks over The Bachelor mansion.  The girls are sitting around the kitchen table and it’s not long before they are rewarded with the arrival of Oscher, who delivers the news about the first date.  In the way of all great Bachelor hosts, he drops the date card on the table and runs, lest he be caught up in the flurry of faux nails and hair extensions as the date card is ripped apart. The fur soon settles and it is Nikki who is awarded a one-on-one date.

She has a scant fifteen minutes to ready herself and the rest of the girls give her lots of great advice.  Eliza, the crooner, has the best advice:

“It’s the first chance you’ve got to show him your knickers,” she drawls.

Replay.  “It’s the first chance to show him who Nik is.”

Oh, well.  Possibly it will be both.

It’s helicopter ride number 1 for this season as Richie whisks Nikki off to a remote little beach for their castaway adventure. Some castaway theme that turned out to be – not a hand printed volleyball in sight. Instead ,Richie rows a little dinghy a couple of metres off shore where Nikki pinches all the pillows, Richie blows his cork and they bob about sipping champagne.

Meanwhile, back at the house it’s group date card time. About a dozen girls’ names are read out, the last of whom is Keira, who clearly didn’t spend any time last night reading How to Win Friends and Influence People, pouting and wincing in disgust at having to share her husband with such common folk.

No such sour-puss visages back at the beach where Richie is hacking into a couple of pre-husked coconuts with a machete.  Nikki tells Richie her sad story about having split up with her one true love six months before her wedding.  Apparently her way of coping was to rush down to Australia Post and send off her application for The Bachelor.  (No Richie, you’re definitely not a rebound thing)  Anyway, Richie seems impressed and whips a rose from under his beach towel and presents it to her.  They share a wee kiss and Nikki can’t wait to get back to the mansion and show the rose to everyone.

Of course the girls clap like a bunch of seals in faux enthusiasm, except for Keira who continues to pout like a groper.

Despite her disdain for sharing, Keira fronts up for the group date, a retro photo shoot. Her part in the shoot is to share a milkshake with Richie and she is momentarily satisfied with the opportunity to swap spit through a shared straw, until Osher tells Alex that she will be in the last of the shoots. Alone. With Richie. In a convertible.  Keira’s shooting daggers.

Soon all the girls are having a great time getting made up.

“Game on, mole,” Keira tells anyone who will listen, in an amazingly warm display of sportsmanship (and reality TV plagiarism).

Her day suddenly gets worse when Kiki emerges from the dressing room in a leopard print swimsuit, rocking it like Jerry Hall in a Brian Ferry video,  and then is further agitated as she watches on while Tolyna and Faith smear sunscreen on her husband.  For her part, Kiki seems far more interested in the camera than Richie; someone more cynical than I might even suggest that Kiki might be hoping to advance her modelling career.

Finally, Keira gets to share a milkshake with Richie (separate straws), while Sasha hovers around in her waitress role, like a pink-clad Russian vulture, and Keira is not happy.  Not happy at all.

The next four girls have a jukebox shoot and Eliza shows everyone that she is as good a dancer as she is a singer, a tornado of tulle petticoats and flailing limbs and none of the other girls get a look in. Georgia is particularly miffed, and I don’t blame her.  The girl is striking to look at, but she has been dressed like a middle-aged, mid-century hausfrau. 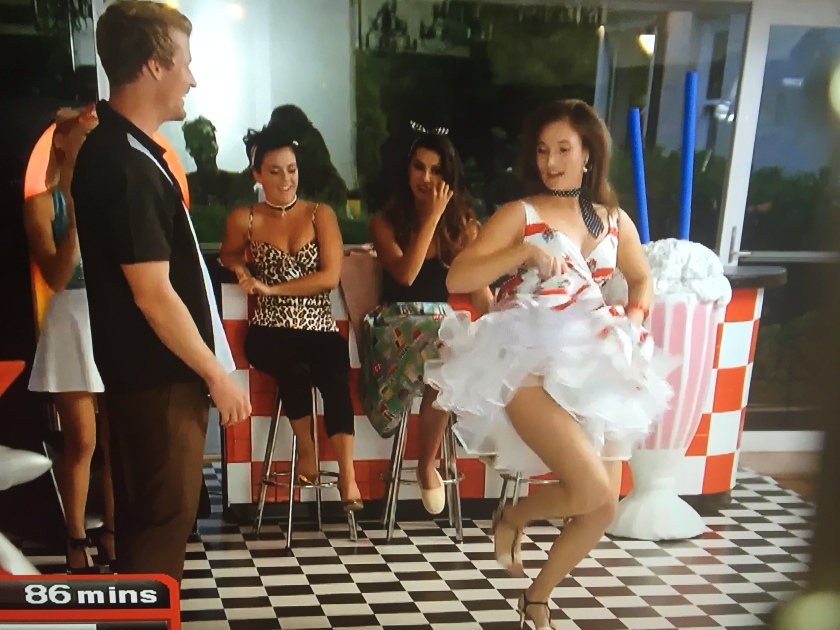 Finally, Richie channels his inner Travolta for the final part of the group date with Alex draped over a Cadillac.  Keira, still dressed as Sandra Dee, is standing on the sideline flapping her skirt around like she’s about to tear it to shreds and use the rags to strangle every other girl within a coo-ee of the 1950’s.

Thankfully, all are spared a garroting for now, and make it back to the mansion just in time for Richie to surprise one of the girls for a single date.  Alex, buoyed by the white rose and a near pash on a Cadillac, assumes he is only has eyes for her.  The eyes have it alright; he’s there for Olena, she who attacks with optical orbs.

Keira does that weird half-raspberry thing with her mouth again.  This is her way of saying: “Have fun, Olena, because tonight I will stab you through the heart while you are sleeping.”

Motor cycle ride number 1 for the season and Richie and Olena arrive at a lovely little grove where scatter cushions sprout from the ground naturally and champagne collects in pools like rain.  Olena comes right out with the big questions.  “Tell me about your broken home.  Do you want kids? Have you ever had sex with a Ukrainian?”   (I may have made up that last one, but Olena is pretty out there for a first date)

All this hard talk makes Richie hot and bothered, so he has to take Olena for a swim.  Then, just to make sure she has a target on her back, he presents her with a rocking red dress to perfectly match the coveted rose and he walks into the cocktail with her on his arm.

Fortunately for Olena, the other girls are too mesmerised by her beauty to spend much time savaging her, and then too distracted by Richie taking Nikki off for MORE one-on-one time.  This makes Nikki Queen Bitch… until Alex rocks in waving her white rose in everyone’s faces.

Richie, oblivious to the carnage this is about to cause, gets a chance to take Alex to the private room where he impresses her with his Geography skills:

She talks of making cubbies out of hay bales and her love of Collingwood and about her gap year that resulted in her son.  Someone should have told Alex that “gap year” means filling a gap between school and uni.

The longer she talks, the drunker the rest of the girls get.  Keira has her morals, don’t you know, and she wouldn’t go flapping her white rose around on the first night.  Megan thinks that it’s Alex’s white rose and she can flap it around whenever she likes.

Alex is so happy that nothing can ruin her night.  Enter Keira.

“I thought you were a good person, Alex, but clearly you’re a white rose slut,” says Keira.

(At least that’s how I heard it, but I am known to be a little deaf at times)

If only Vintaea was still here so we could have gotten her eloquent take on it.

Marja (Really?  Has she said a single word since she’s been in the house?)

Two more are gone, but staying is Keira, who is happy because she wasn’t called last and because that means that everyone else is miserable.

And I am wringing my hands in delight.