There is a real problem with sunshine among this year’s bachelorettes.  OK. So we know they are all much more entertaining in the night-time, when they are drinking wine and they are fawning over the Bachelor, but this year the sunshine is especially excruciating.

Because this year, the sunshine has a name. Vanessa.  Vanessa Sunshine.  And she is the definition of irony in human form.  Everywhere Vanessa Sunshine goes, a little dark cloud follows.  She’s such a little pile of misery that even the arrival of Osher with a date card can’t crack a smile.

And Osher senses the danger. The minute he walks in to the mansion it’s like a cruel wind has blown up from the Antarctic and its icy fingers are tracing up his legs heading straight for his testicles.  He’s not sticking around.  He drops the date card and runs with his manhood, if not his dignity, intact.

Cat pounces on the card:

“Our paths have crossed a lifetime ago…” she reads.

“It’s Cass! It’s Cass!” chorus the girls, clearly calculating ‘lifetime’ as the longevity of stardom once eliminated from The Bachelor.  Lifetime = 1 appearance on The Project + 7 interviews on syndicated radio…in total…let me think…about 15 minutes.

But what the Honey Badger was talking about was a REAL lifetime.  Like thirty odd years, since that time when he and Brittany were born in the same hospital in Port Macquarie and their paths were set on an inevitable collision course.

So Brittany gets the date.  She hasn’t had a relationship in seven years, and boy is she itchy.  Despite this, the date is so boring that it does feel like a lifetime has passed before it’s over.

It starts when Brittany meets Nick down at a wharf.  Now normally this would mean some sort of sea-borne adventure on a romantic yacht, or wakeboarding behind some jet-propelled monster of the sea.

The vessel Nick arrives on looks impressive enough, but once he collects Brittany, it just putt-putts 500 metres across the inlet, dumps them at an empty pier and bids a hasty retreat.

Please, don’t let that be a metaphor.

He forces her to climb a rocky cliff face and what follows is a game of foot golf –  which is apparently a thing  – (this segment sponsored by Northbridge Golf Club), a couple of Honey Badger sized glasses of red wine (“It’s red and it’s from the bottle”) and a splash around in the pool. There is a connection, and the Badger produces a rose.  I was a bit disappointed to see that he hadn’t hooked up some sort of hydraulic mechanism to make it appear out of the water, but having returned to the pool after retrieving it, Brittany is still suitably impressed there is some pashing. 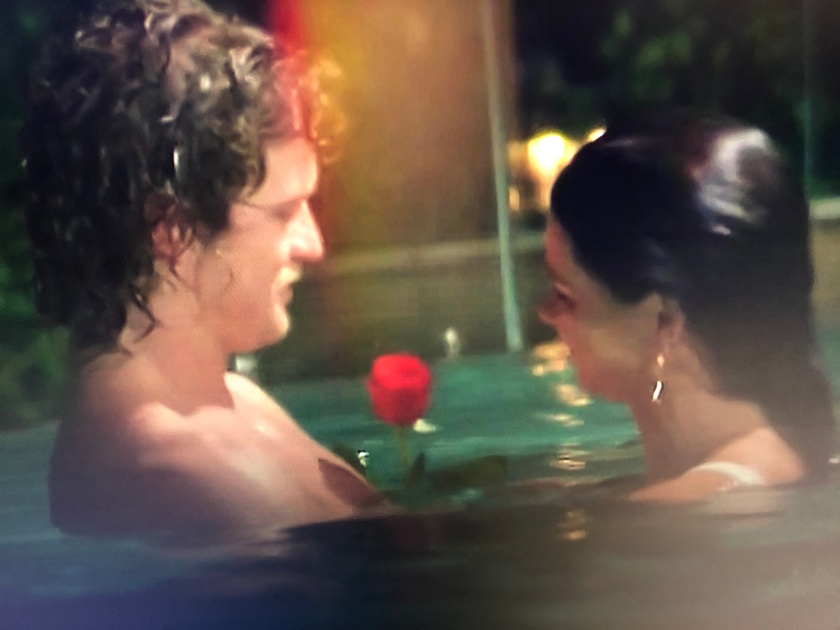 It is unclear how long they lolled about in the pool, but is almost midnight when Brittany returns to the coven house and her hair is still dripping wet – which makes me wonder what sort of mansion with a pool doesn’t have a hairdryer and what the Bachelor’s Uber rating will be having had one of his girls drip all over the back seat.

The next morning, Osher, scared off from the icy reception the day before, doesn’t even bother with a date card. He just waits in the back yard with a bunch of alpacas (why?) and the Honey Badger until a bunch of the girls stumble into the yard.

Osher explains that he couldn’t come in because her has been busy thinking up a number of tests passed on puns and double entendre.

Like his first one.  It’s all about testing grip strength.  Nick needs to know who grips the strongest in case he ever has to shake hands with them.  Osher has devised a test where the girls work in pairs to grip a straw upon which is a delicately–balanced ping pong ball.  The ones with the most vice-like grip go through to the next round, while the ones with whom you would feel more comfortable around your testicles are eliminated to spend the afternoon drinking wine.

Even the alpacas are confused.

There is some other inane round before the only ones left are trying to answer a series of questions about the Honey Badger.  Get an answer right, and you get to smash one of a series of ceramic hearts in front of the others. Last girl standing wins a date with Nick.

Vanessa Sunshine doesn’t really want a date with Nick; she’s just gunning for more airtime where she can repeat her name until it is ingrained in the national psyche. She wins – to Cat’s chagrin -and gets to have some one-on-on time on with Nick in the back yard. I thought watching Rommy latch on to the poor bloke’s neck was painful but that was nothing compared to the agony of a really friendly, chatty bloke try to engage Vanessa Sunshine in conversation. What ensues is the most incredible last line of a date ever:

This could be a romantic line…if you have been married for sixty years and your wife has borne you eleven children and she has just cooked a meal for the whole clan and their partners. But as a first date, that is a dud.

And Cat knows it, because she, and a couple of alpacas, have been eavesdropping on the whole thing.

With Nick dating all these brunettes, Brooke is getting nervous, so the next morning she decides to play her trump card – the key to the Bachelor mansion.   She cooks up a feast of bacon and eggs and grabs a whole bunch of bananas, packs it all up in a pic-a-nic basket and heads off for a private date with Nick.

She hops into a conveniently located car and punches “Bach Pad” into the GPS.  This is a highly risky manoeuvre.  Firstly, I have tried typing “Bach Pad” into my own GPS and it spits back a whole pile of laughing emojis. And even if I could get my GPS to accept that I was being genuine, it would plot out the longest route possible, divert me up dead-end streets or attempt to steer me into trees.

Somehow Brooke makes it to the mansion. Turns out that she didn’t need a key after all as the Honey Badger answers the door himself. Nick is pleased to see her, but the mansion kitchen is out of action, so they have to head to the bedroom instead.  Thankfully, Nick has one of those blanket box things at the end of the bed so Brooke has somewhere to put the bananas.

Once his stomach is full, Brooke lures him out to the backyard so that she can impress him with her rugby skills. Maybe she really didn’t know that he had played fifteen tests for Australia?

Or maybe she had filled his guts with bacon and eggs and toast and avocado (and had listened to the questions asked in Osher’s ridiculous contest) and  she was setting him up for a shoulder to the guts and a wriggle around in the grass.

Finally, it’s cocktail party time.  Cassie is twirling a hair extension like she is imagining it wrapped around Brooke’s throat.

The Badger and Brooke eventually arrive and they canoodle for a while, before he moves on to Dasha.

Dasha has two surprises for Nick: she has a five-year-old son, and she’s not afraid to sit on the grass.

Neither of these things scare Nick away.  In fact, it’s all part of his Australian dream: a whipper snipper in his garage and a whipper snapper in his heart.

Cassie can take no more and pleads with Nick to talk to her.  She needs to lay it on the line.  She produces a book where she has recorded all her thoughts and I brace myself for bad poetry…but it far worse! BAD PROSE!

Cassie confesses her love for the Badger.  He, speechless but gives her a sisterly hug, yet behind her back his eyes are squinted like someone has sprayed acid in his face.  Bad prose will do that to you.

Oblivious, across the way HeCATe and her underlings Romy and Alisha are sitting around some sort of invisible cauldron into which they are pouring a toxic concoction of pinot grigio and boutique beer and espresso martinis and they have Vanessa Sunshine in their sights.

Blair then Shannon attempts to spring to Vanessa Sunshine’s defence:

“There’s more to attraction than looks and sex,” she suggests, before Cat reaches into the cauldron and throws a toad at her.

Finally, it is rose ceremony time.  Osher arrives to announce that there are eighteen girls, but only fifteen roses; three girls will be going home.

He keeps Cassie, despite her oversharing.

He keeps Vanessa, despite her lack of sunshine.

He keeps Cat…because of lack of intel.

But Cayla, of the huge block of quartz, is eliminated and she’s not going out with a fight. She’s going to tell it like it is:

“Cat and Romy are just there for fame!” implores Cayla, thinking that Nick is a different kind of Bachelor who might just like to have the head’s up about who’s a bitch and whose not.

“Thank you for telling me this,” replies Nick, who seems interested for about three milliseconds.  “Off you go.”

Nick slams the limo door in her face. And chucks a two kilogram chunk of rose quartz through the back window.

Oh well, Nick.  She tried.  At least all the real nutters are gone now and Nick can get down to business.

Bring forth moredays of sunshine and roses.