Everybody loves a scandal, and the trailers for tonight’s episodes have tantalised us with just that – rumour and innuendo, dibber-dobbing and one bloke kicked out of the mansion.

But before we can get to that, we have to suffer through the obligatory single date.  Osher is way too busy making stuff for the group date, so Ali has to turn up to deliver the news herself.

She picks Taite, in spite of his pink trackie top, and heads out to the car to set up the blue tooth and get her special hand-picked for Taite playlist happening through the speakers.

But back in the kitchen, foul deeds are afoot, and I’m not talking Ivan’s latest lastest love jig.  Bill has the WILD ROSE and while I was convinced he would pull that out the next time Charlie got a single-date, he surprises everyone and uses it on Taite instead. This is most disrespectful to Taite, and it’s not doing much to respect Ali’s choice either.

But it’s not the first time Bill has taken on another identity.  He once was known as David, so it’s no problem taking on a Taite.  He like The F*cking Talented Mr Ripley.

If Ali is disappointed, it doesn’t last long.  Soon she is driving through the city to the marina – one hand on the wheel, the other lingering near Bill’s crotch.

Ali reminds Bill that she had actually planned the day with Taite in mind.

“Today we are going wake skating,” announces Ali, because Taite is a world wake skating champion or something.  “Have you ever done it?”

“I have some experience,” says Bill, before revealing to camera that he once went wake skating fifteen years ago at scout camp.  Now we all know the rules about what happens on camp stays on camp, but at some stage David had to change his name.  Just putting that out there.

Ali is excellent at wake skating, and Bill is shit at it.  He spends most of the morning enjoying a Hawkesbury enema as he plants it over and over again.  He manages one valiant attempt on his feet and Ali decides to call it a day.

Then Bill eats Taite’s cheese, drinks Taite’s wine and receives Taite’s rose.  Then he receives Ali’s tongue and the single date is over.

The next day they all head out to the back yard for the group date, but really it is an excuse to get them outside while the mansion is fumigated.  It is infested with giant silverfish which are playing absolute havoc with the boys’ clothes.

“I have designed this challenge all by myself,” says Ali, in a bare-faced lie right in front of Osher.  How disrespectful!

We KNOW that Osher is responsible for this convoluted monstrosity – a challenge that manages to combine compatibility questions with life-sized Guess Who? And product placement for Captain Snooze.  The comfy beds have been clearly introduced to the compatibility game at the insistence of the Workplace Safety Officer, who has been placed on notice since Brittany face-planted off the Segway last time. 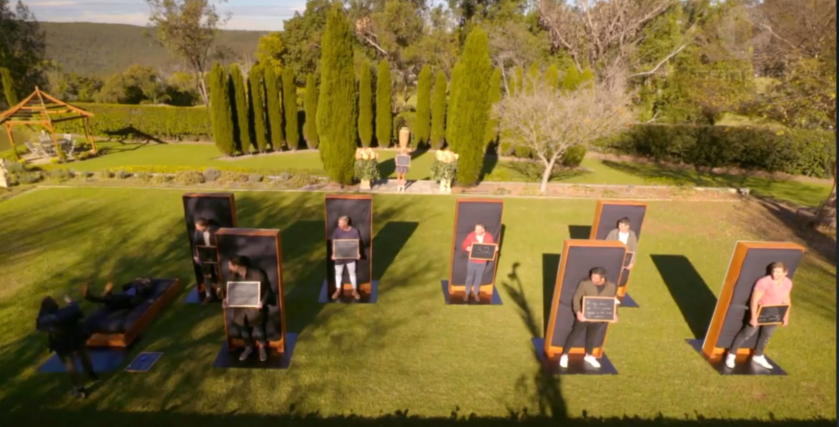 Nathan wins the first round by being the least worst question answerer which gives him an extra few bucks for the second round.

“Welcome to the Inaugural Relationship Priority Auction,” exclaims Osher.  He has a pile of qualities written in frames and the men have to bid for them.  The bloke that buys the quality that Ali values most wins the one-on-one time.

Jules chucks a couple of hundred bucks at “Sense of Humour”.

Ivan is holding out for “Cool Dance Moves” but when it’s not forthcoming, he splashes $900 on “Kindness”.

Paddy doesn’t buy anything and pockets the $2500 so he can buy some more monogrammed shirts.

He spends the first twenty minutes of the date talking non-stop, mostly about how he doesn’t talk much, and Ali just interjects occasionally with a “Yes” or “Aha” because:

So MAYBE in all that soft-talking Danny asked Ali if he could kiss her and she said “aha” because she wasn’t really listening, but in a split second he has stopped yabbering and has planted a pash on her.

This is a little bit awkward.

And ironically, not very respectful.  Not respectful at all.

At this stage I am convinced Danny is going home, but in true Bachelorette tradition, he is saved by someone making an absolute dick of themselves.

Charlie is appalled.  Only he is there for Ali.  He knows what she wants and what is good for her.

For the second time this episode, Taite has his grass cut, because Charlie has some dibber-dobbing to do.

“You know how you have always fallen for guys with the wrong intentions?  Well I think you are doing it again. It saddens me to tell you that Nathan has been spreading rumours about you.”

But Charlie is not saddened.  Ali confronts Nathan and Charlie is very proud of himself. “If there is anyone here who wants to disrespect Ali, there’s the door!” he bellows, pointing at something that looks a bit like a sideboard.

Ali interrogates all the other blokes to see who’s spreading rumours about her.  Nathan’s disrespect is confirmed, and just for good measure, Pete throws Bill under the bus as well.

For the second time, Ali hunts Nathan down.

“This isn’t going to work,” she says as Nathan speaks in unconvincing stammers and crocodile tears start to well in his eyes.  “It’s time to go.”

And she grabs him by the arm, shoves his disrespecting arse into the back of an Uber and kicks the door shut with a stilettoed heel.

And you’ve got to respect her for that.