Day two and all the fellas are assembled in the lounge waiting for Osher.  Some of the girls from last season appear to have done a shoddy job of packing, and it looks like half the men are wearing their clothes.

Soon Osher arrives with the date card – the first single date of the season and Pete snatches it like it contains the reserve prize for an auction in Toorak. He rips it open and reads it:

You wrote down your feelings and now it’s time to raise the stakes.

“Hey, did any of  youse write anything?” Pete quizzes.

“OK. Did any other of youse write anything?”

So the answer to that is no, then.

Charlie receives the date, and although Bill holds the all important WILD ROSE, he decides to let Charlie go on the date, coz that’s what a decent bro does for another bro.

And what a good call that was, because it turns out that the date is playing Twister on a platform suspended sixty-five metres above the fore-court of the Sofitel Wentworth.

Ali is scared witless about this date – which she organised by herself all on her own without any interference from anyone else, like no producer or anything.

It turns out Charlie is all over it though, having learned how to play aerial Twister while working on construction sites in Dubai.

“What’s the worst thing that can happen?” Charlie asks supportively.

Well…she might have to swing her right leg over your head to put her foot on a red dot, and any slight movement adds a risk of Twister turning into Kerplunk.

It turns out that aerial Twister is a really crap game.  Nobody spins anything before Ali pleads to be dragged back in and she is so grateful to Charlie that she showers him with kisses and falls a little bit in love with him.

They adjourn to the Sofitel’s Velvet Room, but first Ali has to nip into one of the suites and fashion herself a frock out of thousand thread count Egyptian cotton bed sheets. It turns out Charlie is a pretty chatty chappy and it’s not long before he tells Ali that if things keep going the way they have today (Base-jumping? Hang-gliding off Centrepoint Tower?) he can see himself falling in love with her.

At the very mention of the L-word, Ali whips a rose out of a candy container and seals their future-potential-union with yet another kiss.

When Charlie gets back to the Bachelor mansion, the guys pump him for information about his date and he says that he’s not the sort to kiss and tell (that would be a direct violation of the Bro Code), but he has lipstick all over his face, so it matters little.  That’s not to say that he doesn’t want to speak and he launches into a patronising tirade about what Ali wants and how to behave around Ali and that if they don’t know how to do that then: “There’s the door.”

Clearly Charlie did not read Osher Gunsberg’s Guide to Making Mates in the Mansion like he was supposed to.

This shoot is for Mills and Boon covers (think back to Georgia Love’s season) which really excites Jules (though it must be said: a bowl of day-old Coco Pops excites Jules).

“Mills and Boon books are enjoyed by all the elegant ladies,” enthuses Jules.  He might be right, assuming that the Oxford Dictionary defines ‘elegant’ as ‘bogan chick what can’t read real good’.

Jules is even excited when he is forced to wear double denim and pose as a photographer for the first scenario, while Ali rubs oil into the bare chests of Ivan and Danny.

“I’ll stand out.  I’m short, I’m skinny and I’ve got a fantastic mo!” and he embraces the pretend photographer role with such enthusiasm that he manages to pick up a bit of weekend work polishing the lens of the real one.

Then there is the Spring Break shoot, and it’s one of those times when I know that karma is real, because Paddy gets to wear this: Next it’s a Halloween shoot.  The real photographer has managed to wrestle his denim jacket back from Jules and sets about setting up a “high-class Halloween party”, the highlight of which is Todd dressed up as a voodoo master, naked from the waist up save for a top hat, a bit of black-and-white face paint and a few feathers stuck to his shoulders.

The very sight of Todd’s plumage reminds Dan of every poultry meal he has ever eaten and he proceeds to bore them senseless with a verbal degustation of every duck, goose or poached egg that has ever had the misfortune to travel his alimentary canal.

Finally we get to the single photo-shoot where Ali and Taite are set up in a Winter Wonderland while the only Pure Blonde the rest of the men get to taste comes out of a bottle. Inexplicably, Paddy is still wearing the bell-boy outfit. Maybe it gives him more collar to be hot under, because things are getting hot and steamy out on the snow.

What better way to cool off than to return to the freezing cold backyard of the mansion for a cocktail party!

Charlie wastes no time telling everyone how there is another amendment to the Bro Code. This one says that no man who has a rose in his possession will request one-on-one time with Ali at the cocktail party.

“And I am an honourable man and I will honour the code,” says Charlie, until he sees Ali pash Bill in the back yard and five minutes later he is grabbing Cheyne by his flowing locks, swinging him around his head like a human lasso, before flinging him over the fence.

This sends Paddy into an eff-bomb fuelled tailspin:

Thanks a f*cking lot, Charlie.

At least the rose ceremony is soon upon us.

All the men are fixated n the tray of roses, but why is no-one tending to Jules?  The poor bloke’s enthusiasm gland has exploded and I think he may be broken. 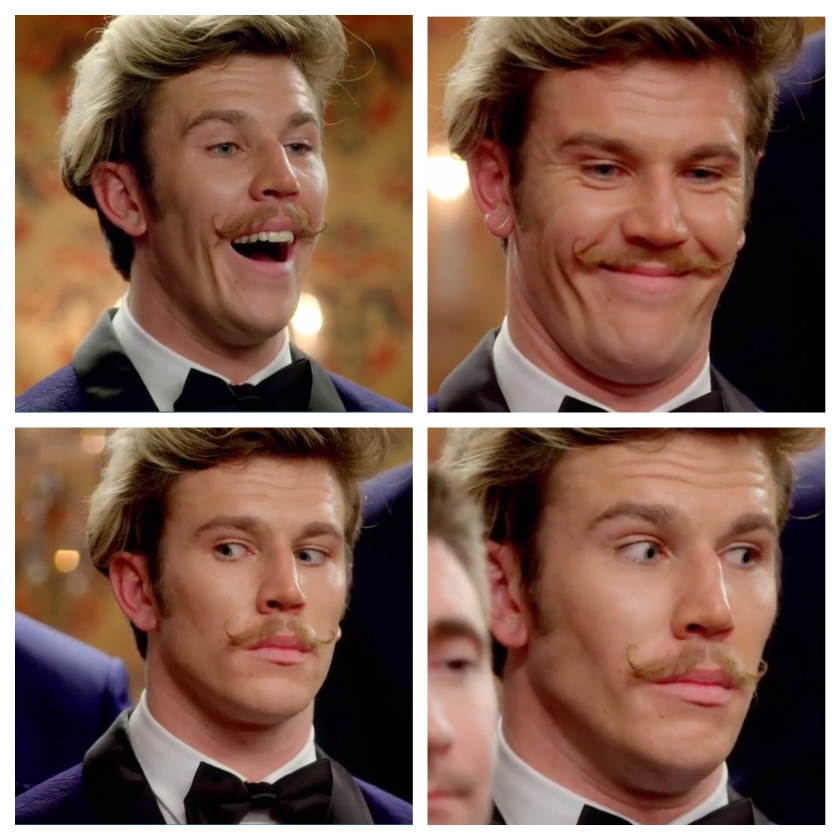 One by one the roses are given out and…please…Jules…somebody…help…Jules.

Finally…when there is only one rose left, Ally notices.

And I’m pretty sure the rest of the sentence was going to be asking him if he was OK, but before Ali can utter another word he has staggered forward, grabbed the rose, sniffed it like it ‘s made of pure cocaine and joins the rest of the blokes.

This leaves Cheyne – who has only just made it back to the mansion after stumbling around blindly in the dark before crawling thtough a crack in the fence to re-enter – finding himself in the back of an Uber.

See ya next week.