I was going to have a break.  I had grieved with the rest of the nation when Richie chose Alex, and watched Matty’s heart break before my eyes when Georgia chose Lee.   It was all too much. I was going to take a break.  I really was.

Besides, as WordPress wished me a happy anniversary yesterday, and I reflected upon how testing the blogging waters with a couple of tail-end episodes of The Bachelor: New Zealand morphed into commentary on three subsequent seasons of The Bachelor (Canada, US and Australia respectively) season two of The Bachelorette: Australia and a few episodes of each of Jo Jo’s Bachelorette journey and the train wreck that is/was Bachelor in Paradise, I truly thought I had seen every type of try-hard, desperado, and bunny boiler to publicly document their quest for love.  I just really thought there was nothing new to write about.

Then I flicked the tellie onto Channel 7’s First Dates. And along comes Roxy. 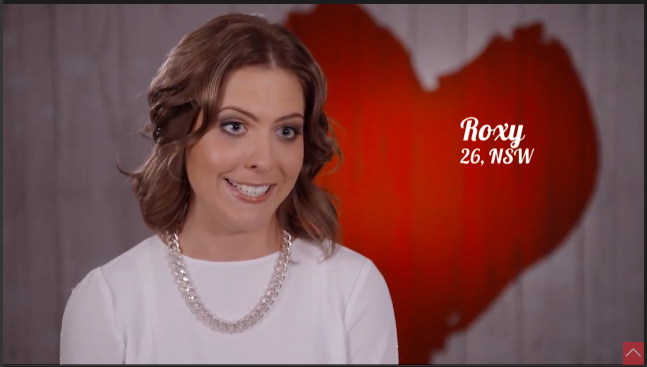 And she is a special kind of crazy.

She presents normal enough, but then she produces a business card.

Roxy claims that her mother had these made up and that her mother gives them out to any single man she meets  – and yet here you are, Roxy holding one in your hand.  Mum is clearly a little bit nuts and the apple doesn’t fall too far from the tree.

There WERE other couples featured in this episode. There was Lisa the 35-year-old, cosmetically enhanced, self-described MILF with an obsession for the word package in all of its definitions – and her date – equally self-obsessed (“I’ve got a great weapon down below”) fitness studio owner, Ryan.  There was Lebanese king of the cheesy one-liner (“I’m going to call you Internet because we have a great connection”) Shadi, who is not on his first date ever, but his first with a Lebanese girl like Natalie.  There was Tonee, sick of going on dates with her Mum, who ends up on a blind date with a dirty barber-come-bass guitarist, Jake – and it turns out they went to primary school together.

But all of them pale into insignificance next to Roxy.

Soon Roxy is settled at the bar for a drink.  The bartender, skilled in the art of making polite chit-chat, makes the mistake of asking her if she is there for a date. This provides the perfect opening for Roxy to off-load her entire dating history.

“Yes. I’m here on a date.  I’ve been on heaps of dates.  Over fifty.  And I’ve paid for ALL of them. And the last guy told me I wasn’t pretty enough and I talk too much.”

You think, Roxy? Or maybe it’s that none of them can get past the fact that all you can talk about is your shit dating history.

The bartender busies himself making her Bloody Mary which he places on the bar and she sucks down like she’s a fifties teen at the counter of a milk bar.

“Anyway.  I hope this one’s a gentleman. And he’d better be dark-skinned, tattooed, all muscles and look like Usher.”

Cue Aarun.  He certainly ticks the list for most of those things.  He’s dark and he works out.  He likes to think he is gangsta, but admits he’s too nice for that.  And he certainly is a smiley chap. He even thinks that he looks like Usher.  That’s what all his friends tell him anyway – no doubt in the same way we let little kids win at chess so they don’t throw a tantrum.

Aarun is after someone “quirky”.  If in quirky he means “needy and desperate” then he may just have met his destiny.  He’d also like someone to play “doctors and nurses” with.  Hmmm.  Could work; if the doctor he’s thinking about is a psychiatrist.

He orders himself an espresso martini and then tells her that he was nervous, but that the first thirty seconds is what it’s all about.  Too bad that in the first thirty seconds, Roxy decides to tell him how she is the “Bridget Jones of Australia”.  Sadly, Aarun’s choice of film genre is horror and he does not appear to recognise the warning sign in this.

Shortly, they are seated at the table and Roxy tells him that she is a nanny and that one of the children in her care has made a card for him.

I’m wondering how that played out at her work:

Roxy: Gather around kiddies.  It’s story time.  Today our story is about a beautiful princess who dated all the princes in the land but they were all arseholes who wouldn’t pay for dinner and now she thinks she will never find love…”

Children (chorus):  Oh no!  Not this one again.

Roxy:  Shut up!  You will listen to it and you will enjoy it. And then I’m going to chain you to your craft table until you have made me a stash of cutesie love letters, OK?  And you will do it, if you ever want to see your parents alive again.  Now, where was I? Oh yes… ”Once upon a time…”

I’m thinking there are at least three families in Sydney who need to rethink their choice of child care agency.

Anyway, if she wanted polite, polite she has in Aarun.  He doesn’t once appear to be creeped out by her exploitation of toddlers.  He only slightly bats an eyelid when she tells him that she has always been single.  ALWAYS.   And he doesn’t bolt from the table and try to escape through a bathroom window when she says she got a refund from e-Harmony.  Or maybe he just knows that the bathrooms don’t have any windows.

“I’ve been on terrible dates.  Not one good date.  And I pay for EVERY date,” she tells him, twirling her pasta with like she is mentally garroting every one of the tight-arse duds.

“I’m going to write a book about all my terrible dates.  It’s to have fifty chapters.”

And it shouldn’t take her too long to write either.

Chapter One.  He told me I was ugly and skipped without paying…”  Copy…paste…paste…paste…

“I like easy-going girls.  Sometimes I’m too nice,” he says.

“Me too!  That’s why I always end up paying for everything!”

Oh.  I may have neglected to mention how Roxy has paid for every single date she has every gone on.

Eventually all the pasta that will be eaten has been and it time for the…BILL!

“Of course, I am.  Don’t be silly! I never let girls pay.”  And he says it like he hasn’t even been bullied into it, or that he doesn’t want to look like a complete twat on national television.

So it’s time for that part of the night when the couples sit awkwardly in a room until a disembodied voice asks them if they would like to go on a second date.

“Well, I would,” says Aarun, and I swoon a little bit about how incredibly polite this man is. “But I’ll leave it up to Roxy.”

Roxy mentally goes over her checklist:

Didn’t tell me I was ugly. Tick.

NO? Have I heard this correctly?

And as Roxy cries into a table napkin lamenting another love disaster, Aarun exits down the Pitt Street Mall, and I’m sure it’s not only me who thinks he might be skipping. He’s polite and a little bit poorer, but not unrelieved.

There you have it.  A new breed of try-hard, desperado, bunny-boiler.

And she’s going to be back next week.