It’s the morning after the first rose ceremony and all the lads are gathered in the kitchen.  The word “mate” is being thrown around with gay abandon, so we haven’t yet got to the stage where the testosterone levels are reaching punch-in-the-mouth status.  That’s probably lucky for some of them, because I can’t see crazy shirt Courtney or fireman Cam holding up too well in a fight.  Are they lovers rather than fighters?  The jury is still out there as well.

“How did youse feel…youse feel…youse..about that rose ceremony?” quizzes one of the more articulate ones, possibly Tommy, but one I don’t see much point in learning the name of, because I don’t think he’ll be around for long.

They are all pretty kind to each others’ faces, but a rivalry has emerged between entrepreneurial model, Rhys, and I’m-not-a-model, Sam.  Bring it on.

Now normally another guy thrown into the mix would bring on a fair bit of masculine angst, but not so when the new arrival is Osher (and I am watching closely to see if this Osher is ever in the same shot as Matt).

Osher pulls a date card, the size of a modern housing allotment, from somewhere.  Cam too is wondering how Osher does it.  Just one of those smoke and mirror host tricks, Cam.  Best not to worry your pretty head about it.

Jon Lovitz…I mean Aaron, clearly aware that he is not single-date material, opts to read the card instead.  The lucky guy is Jake, who made quite the impression on Georgia when he stepped out of the limo the night before, but who didn’t have the forethought to fashion a jewellery item out of fusilli.

The single date turns out to be being suspended from a cable car in the Blue Mountains and slowly lowered 100 metres to the forest floor.  At this point I’m very grateful that Georgia didn’t give a sympathy single date to Ben, because if meeting a girl after stepping out of a limo was enough to invoke three nervous poos, one can only imagine what sort of trouser carnage this experience would have created.  Having said that, it might have been a good one to invite Sam on.  Scissors handy, if he started with any more of that “brie or camembert, toilet roll in or toilet roll out” shit, one snip could just put an end to it.

For Jake, the whole thing is a religious experience:

I believe that’s a holy trinity.

They reach the bottom unscathed and Jake says that Georgia has blown his mind.  I have to admit I was pretty impressed with her in this activity as well.  How much choice she had in it, I don’t know, but she certainly gave the impression that launching herself out of cable cars was something she did three times a week.  Absolutely no signs of panic.

Jake certainly is relieved when the second part of the date is in a cosy room in front of a fire.  Here they quiz each other about their reasons for coming on the show.  Georgia reveals that her mother’s cancer diagnosis has changed her outlook on life.  Jake explains how his mother has been battling cancer since he was twelve years old, and it is a touching moment which instantly creates a bond between these two.  Their date ends with a kiss and the inevitable rose. Okay.  One of the final four is in the bag. 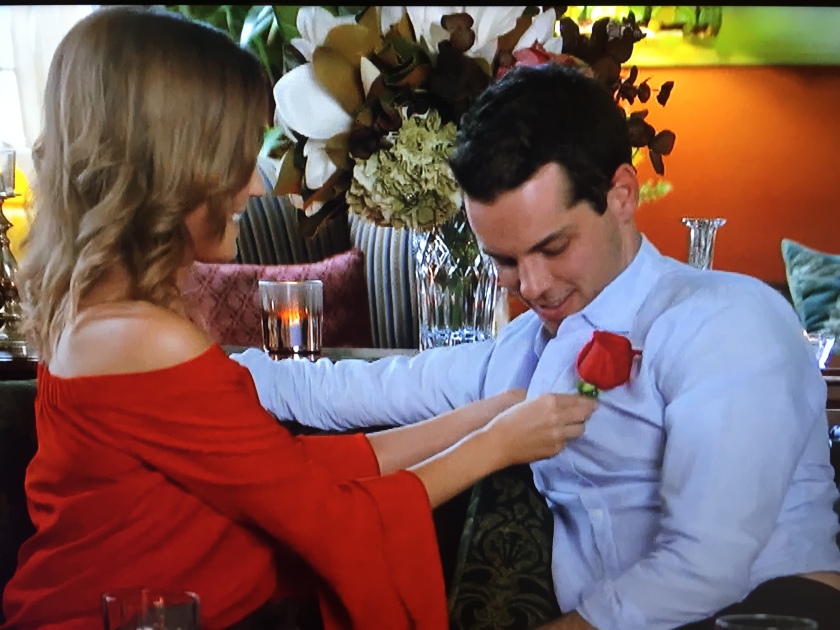 It’s a long date, so back at the mansion the boys are starting to get a bit teste.  I mean testy.  When Jake finally arrives back, he is interrogated.

Jake goes the “a gentleman never tells” path, until he pulls out his rose and waves it around like he is a dog trying to piss higher on a tree.

While Jake was away the group date card arrived.

It comes with a clue: cover me.  Half a dozen of the blokes draw the conclusion that it must be a mud bath.

A group mud bath, because watching ten men frolic in a giant bath full of dirt soup is EVERY girl’s idea of a romantic date.  Then one bright spark decides it must be a game of paint ball, because a group mud bath makes no sense, but a romantic game of ten men firing paint pellets at a woman is spot on.

Anyway, all of them are chosen except for Jake, Matty, Jay, and Tommy.

Needless to say they are all wrong in their guesses and the next day the ten of them head out to shoot some gay erotica.

Oops. Did I type gay erotica?  I meant Mills and Boon covers.  Real Mills and Boon covers that will really go on the covers of these romantic novellas, which according to the rep from Harlequin Publishing sell at a rate of two per second.  That amazes me.  It’s about the same rate at which they are written.

So the boys will all be photographed with Georgia, but in groups of varying sizes. Cameron is lucky enough to get the single shoot (the same position Alex was in first group date retro shoot in The Bachelor.  Hmmmm…)

Before you can say Bob Katter, the boys are all decked out in their best Aussie outback clobber, rendering them totally unrecognisable as outback anything to anyone who has actually spent any time in the outback.  RM Williams just did a somersault in his grave.

After a few modelling tips from Rhys, the boys are all set to go.

Now admittedly it has probably been thirty years since I read a Mills and Boon novel in all its “she-felt-his-rising-manhood-press-against-her-milky-thigh” titillation, but I have read a great many REAL novels in the intervening years and know that there is usually some sort of connection between the front cover and at least one plot element.  I’m okay with the concept of four men striding across a dam.  I’m okay with the idea that Courtney might be carrying a girl across a dam.  But I’ll be damned (see what I did there?) if I can come up with a plot twist requiring a guy carrying a girl accompanied by three other guys striding across the same dam carrying random outback stuff.  Ben has a swag, Ryan has a lamb (named Lorriane) and Aaron has a…………….log?

For the next shoot, Lee gets to sit on a horse with Georgia while Matt gets to play stable hand and hold a rope attached to the horse.  Fair enough, because Lee already did the whole holding a rope attached to a donkey. Admittedly, Matt’s gig is not too exciting, but honestly, they may as well have stuck a cardboard cut-out of Osher Ginsberg in his place…or maybe they did?

The three-man shoot is really the one to watch, mostly because two of the men are Sam and Rhys (Clancy is the third, but who really cares).

The producers must have gotten wind of how ripped Rhys’ abs are; most likely from Rhys himself.

“I have rig.  I showed my rig,” explains Rhys.  And it is quite an impressive torso.  Unfortunately, it still has Rhys’ head attached to it.

So Rhys gets to be a bare-chested axe-man pouring water over his head, while Sam gets to be a fully-clad axe-holder watching Rhys with disdain.

After a bit of Zoolandering about who is the best model, Sam finally breaks down and admits to a couple of Big W catalogues.

“But Aldi is my finest work,” says Sam. “I was in flannelette pyjamas.”

That was then and this is now, Sam.  Now your best work is restraining from burying an axe in Rhys’ skull.

Finally, Cameron and Georgia get to pose among the hay bales and produce some chemistry. Whether there was chemistry between the two of them is debatable, but scrutineers Sam, Clancy and Aaron are all fired up. One of them even says that the sight of Georgia and Cam almost kissing makes him want to go home.

Boy, are you in the wrong show.

In no time they are all back at the mansion for the cocktail party, which is all pretty dull if it weren’t for the clear battle lines being drawn between Sam and Rhys, the two biggest egos in the house. Sam strikes first for a one-on-one chat with Georgia.  Gone are the stupid “boxers or jocks” type questions in place of spending his whole conversation bagging out Rhys.  This is dangerous ground, Sam, and as evidence I cite The Bachelorette US – Season 12: The Good Guys v Chad.  Whinge too much and they get to hang around for a while is all I’m saying…

And then Rhys butts in and produces…a fucking poem.

Georgia, forgetting that she is a journalist and therefore presumably something of a wordsmith, giggles and asks to keep it.

But while Rhys recites verse, Sam holds court and rallies his troops.

“He goes to work, does nothing and then comes home and gets breast fed by his mother!” guffaws Sam.

VOMITTING IN MY MOUTH.

The rose ceremony can’t come quickly enough. Jake already has one, so here we go with the rest:

Ben, the ADHD miner is going home, in the least emotional farewell ever.

“Thanks for everything, Georgia” offers Ben.

Of course Ben was always going to be the sacrificial lamb, but I can’t help but think that he still had more to offer than some of the bozzos still in.  At least he wore socks…but sometimes that can be the very reason you are cast aside…