So I was in a bit of a down mood before coming into this week’s episode. But just like the real thing, there’s nothing like a glass or two of wine and a spot of camping to lift the mood, even if you are expecting a bit of shameless cross-promotion and for Jonathan La Paglia to emerge from the bushes:

“Alex.  The tribe has spoken.”

I do also admit to being quite confused several times by the actual promos for Offspring.  Every time I saw Asher Keddie standing at the doorstep saying, “I’ve decided to have another baby!” I thought it was Alex, about to drag Richie up to the White-rose-love-turret (but even Nina is not as desperate for sex)

Back to orchestrated reality.

Osher has the briefest of entrances to announce that Richie is waiting for them outside.  The girls rush outside to see Richie planted upon the bonnet of a Land Rover, spurring the girls to rush inside and change into their best camping garb.  Faith, realising that you can never have too many pockets to store your torches and insect repellent and such, forgets to actually put on any pants.

(NB:  I know I have made many references to the pant-less pockets in my blogs before.  It’s almost like I’m on a crusade to eradicate this fashion monstrosity.  Hell yeah!)

For his part, Richie loves going camping and has many pleasant childhood memories of it.  Well, if there’s nothing more likely to blot out those memories, it would be going on a camping trip with five potential wives.

“Who here is an experienced camper?” he asks.

After an indeterminate amount of time, Richie arrives at a clearing in the bush, and the girls, inexplicably,  get ready for the Easter Egg hunt: 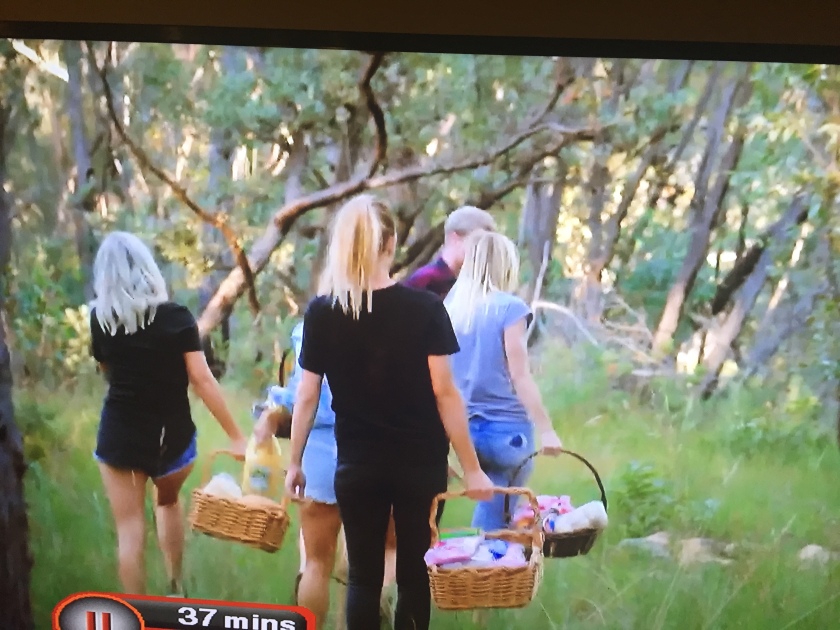 They walk a few metres into the Australian outback:

Clearly The Bachelor is short on depilatory cream sponsors.

What they aren’t lacking is a camping good sponsor.  Last week I was thrilled to see my throw-rug, casually tossed on a chaise-lounge at the cocktail party.  I could scarcely contain myself when I saw my tent.  Now I can tell you, each of those girls seemed to be erecting the Black Wolf Turbo Lite Plus, and if that’s the case, there was about $7000 dollars (retail) worth of tent in that grove.  In my own bit of shameless cross-promotion (www.tenttrailercravan.com) I can certainly attest to them being a very good tent.  Even though Faith and Olena made it look incredibly difficult, I am able to erect one of these in under ten minutes on my own, but I admit that I have never attempted it in a six inch cork wedge heel.

Olena is not coping, not coping at all. Even though last week she happily crawled through mud under a cargo net (twice), this camping thing is not her bag. I get it.  In the Ukraine, open space might equate to Russian air space.  I absolutely get it.

“Welcome to glamping!” salutes Richie. Glamping must be when you back up with Black Wolf camping chairs and cook your steaks in a fish grill and actually remember to pack both Baked Beans AND a jaffle iron.

Soon Richie, in a clear sign that she is NOT the one, takes Alex on a one-on-one date to lean on the passenger side door of the Land Rover.

“I love it!” exclaims Alex, in her usual over-the-top enthusiasm.

Once, we were camping in a national park which had signs up saying that they were closed for the next two days for a wild pig cull.  There are just moments in time when you wish someone was culling Black Wolves…carrying white roses.

That night, the girls suggest a game of “I Never”.

“What game is this?” asks Olena.

Faith explains.  “Well, you say something you have never done, but anyone who has done it skols a drink. It could be anythink. (Oops.  Forgot the doppelganger went two episodes ago) Like..I never went skinny dipping.”

Olena starts it off. In an amazing display of creativity she offers:

Everybody else skols.  Olena fail.

Nikki is next, but she has her glasses on which means that Nikki is SMART.

“I never…took Richie away for on-on-one time!” 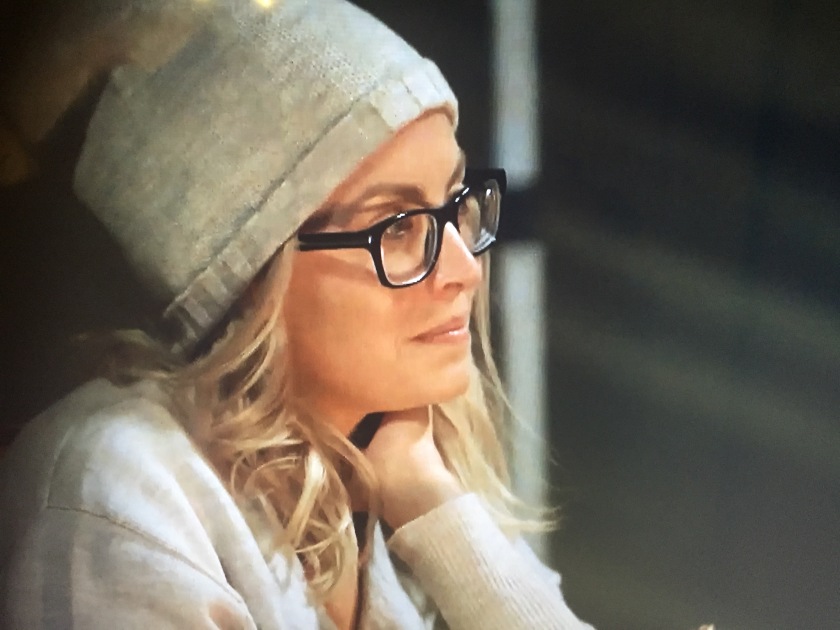 Except for the two one-on-one dates.  And the time she won the one-on-one time on that group baby challenge.  And all those times Richie took her way at cocktail parties.  Alright, technicality accepted…Richie technically did all the taking.

The next morning, Rachel is making breakfast for everyone.  She decides to make scrambled eggs.  In the absence of a bowl she improvises by cracking all the eggs into the kettle and then pouring them into the frying pan, because cracking them directly into the frying pan and then mixing them around is way too primitive for camping?

Olena is not amused by egg-yolk in her Russian Grey (or is that a cat?)…Ukrainian Breakfast, or whatever exotic teabag she has dunked. I’m with her.

After breakfast, Richie takes Olena away for a quiet chat.

“So I would like to meet your parents,” begins Richie.

“What if my parents hate your guts?” asserts Olena.  Gotta love a girl who says it like it is.  Or how it might be.

No time for too much deliberation, because Richie has lined up a game of Kayak Polo (amazingly not yet an Olympic sport, despite the opportunity for groin cam). 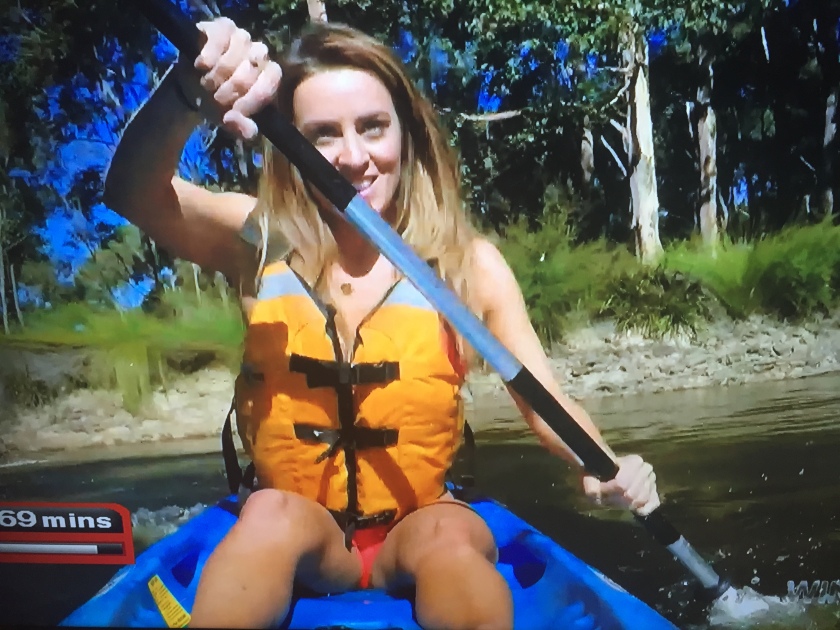 Richie and Nikki get thrashed by Rachel and Faith, and then somehow Faith gets picked for alone time with Richie.

A rustic cart, adorned with throw rugs and cushions has miraculously appeared in a clearing.   Richie asks her how it will be to meet her parents.  Faith just giggles a nail into her own coffin.

The other two girls are treated to billie-cart racing, the most natural Aussie camping experience ever. Richie says that Alex is so adventurous.  The Oxford Dictionary is always updating its lexicon, so one can only expect that the people at Roget’s Thesaurus are doing the same.  I assume, then, that “adventurous” means “fucking desperate”.

It worked. Between she and Richie, all races were won. But Olena never gave up, despite her cart being reduced to lawnmower status:

All of a sudden we are back to the Rose Ceremony.  That means no cocktails, so the girls are finally facing this sober.

Rachel (My husband, whose interest has peaked in the past fortnight, is elated. He has NFI).

In a Bachelor paradox, the perky one goes and the aloof one remains…

…but all of a sudden the ones that are left all happy campers.

Bring on the parents.