Whatever this episode dishes up for us this week, one thing is for sure:  it has been well and truly overshadowed by the exposure of Keira’s early life in a cult.  “Keira’s Life in a Cult” screamed the pages of Woman’s Day, Australia’s most reputable journalistic magazine.  The story was soon picked up  by Australia’s most reputable journalistic television program, A Current Affair.

“Poor Richie!” we heard the women of the nation cry.  Until those of us who can read actually read the fine print – that is, anything that is written below the headline – and found out that the despicable, lying Keira was taken away from the cult when she was four years old, and as a now twenty-nine- year old woman, her mother’s dubious lifestyle choices have done little to shape the woman that Keira has become.

She’s learnt to be a crazy bitch all by herself.  I have to admit she is a clever one, who has pretty much assured some sort of media profile after this.

One word of advice for Richie, should it pan out that Keira is THE ONE – don’t offer to host Christmas at your place.  Sixty-three brothers and sisters will drink you dry.

No such sibling rivalry in the house (though mind you, Keira hasn’t seen some of her siblings in more than twenty years, so who reeeaaally knows?), but plenty of rivalry none the less, as Osher arrives and catches all the girls in their jimmy-jam-jams.  Faith opens the envelope and announces that it is a single date and the lucky girl has to be ready in only fifteen minutes! Fortunately, most of them seem to have awoken from their slumber with a full face of make-up.  The lucky girls is…Alex, which sends Eliza into some sort of euphoric celebration because the message that it isn’t her takes a while to make it to the mouse powering the treadmill of her brain.

Georgia does some maths.

“So if Alex, has the white rose, and then Richie gives her the red rose…that means…um…she has…um…”

I think the answer you are looking for, Georgia, is eleven.  Eleven knives in her back.

Alex puts on her best beige, to blend in with both the leather seats of the limo and her personality.  Just kidding…the limo seats were grey!

Somewhere during the journey, the poor girls has managed to tear her strides so, ever the gentleman, Richie stops into a frock shop.

It’s a classy boutique, one which offers classes in undie tucking, but given my pre-premiere assumption that Alex’s bombshell was that she was born a man, I’m not sure the lesson taught her much.

To her credit, there was a whole rack of beige frocks that Alex walked past and she instead picked one that made her blend in with the couch.

Back at the house, the rest of the girls are playing cards. I assume they’re playing Game-On-Mole.  It’s a variation of Go Fish, where instead you say, “Go fuck yourself” while simultaneously making a groper face.

Suddenly Georgia bursts in with the group date card.

“Nobody puts baby in the corner,” the cards proclaims.

Noni almost shows some intellect.  “We’ve already done dancing, so I don’t think it will be that….” We can see her brain clicking into gear:  Baby…..Babe….BACON! Nah…I got nothin’.

Sasha, Kiki, Maegan and Nikki are chosen, and Keira, who hates group dates, is now pissed off because she hasn’t been chosen for one.

“I’m having withdrawal symptoms,” she says.  Wait until she finds out it involves four of those computerised baby dolls.  This might trigger flashbacks to when she had to help her mothers change seventeen dirty nappies.

Oh, those mechanical babies!  We used to have a program at our school where kids studying Early Childhood would take one home for the weekend.  This one time, the Early Childhood teacher set the baby to “crack addiction with croup” in a malicious revenge attack on the student who was to take it home.  The teacher left bang on bell time, the kid never showed up to collect it and Rosemary’s Baby started screaming at about 3:01 pm.  Those of us who had stayed at school to get some work done tried everything to calm it: rock it, sing to it, try to detach its battery pack.  Nothing worked.  Ultimately we decapitated it.  No more crying.

But I digress. Again.

Richie has taken Alex to a flash hotel in Double Bay where the concierge has thoughtfully left an arrangement of anthuriums.  I had these in my wedding bouquet.  They droop after a while.  Not quite the metaphor you want. 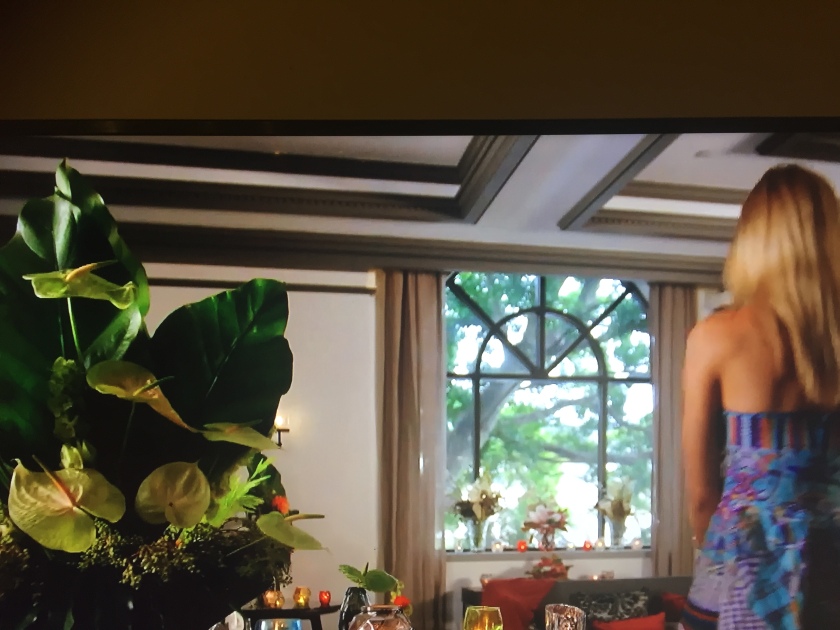 Anyway, high on a diet of cosmos and petit fours, Alex decides it’s time to bring up the elephant in the room: her son.  Richie admits that it’s a huge responsibility to take on someone else’s child.  Alex’s Adams-apple does several laps of her ostrich-like neck in such a way that I’m still not unconvinced that she’s not about to reveal another dark secret.  Richie doesn’t rule out being step-dad, and Alex starts quoting Shakespeare:

“Let me not to the marriage of true minds admit impediments,” she says. Except it comes out like, “Yea…like…love…is love. Right? You’re great, Richie.”

He is even greater when he takes her out on to the balcony where a trio of world-renowned hipsters play thirty seconds of a song for Richie and Alex to dance to.  In the American version this would have been a country singer.  Lee Kernigan must have been all booked up.

Then what a surprise.  Richie pulls out a red rose.  This will make Georgia’s internal calculator explode.  I can hear her now:

Next morning, the girls are awoken to the sound of crying babies.

Kiki thinks that this is the worst possible way to wake up.  She SOOO lacks imagination.  House on fire? Car drives through your bedroom wall?  Intruder with a knife to your throat?

The penny drops for Eliza.

“This…is…their…date…” she declares semi-confidently, finally realising that she isn’t on the date and then uttering a sigh of relief.

Sasha is particularly worried.  She can cope with a Black Russian, that smooth blend of Kahlua and vodka, but is far less confident when presented with a miniature black Russian. 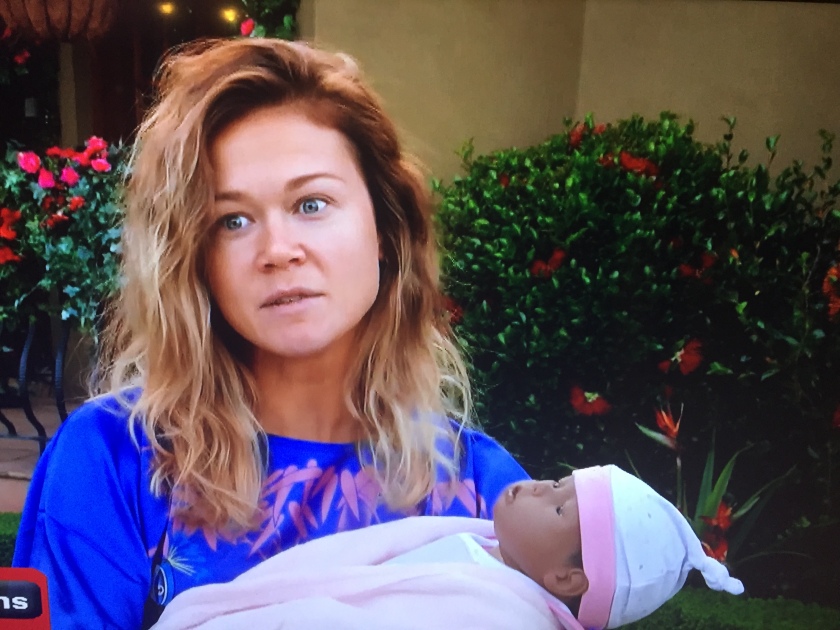 Kikki has learned her mothering technique from Keeping up with the Kardashians and is rocking the baby carrier.  Noni thinks this is hilarious, until Richie tells her that she’s in on the date too, and gives her a set of twins.

All is not so bad for Noni.  Because of her twins, and the pair of babies Richie gave her, she gets to ride in his car.

The date it a totally realistic scenario where one man, five women and eight babies go for a game of Putt-Putt.  All that is missing is Lucille Ball.

Then Richie starts explaining how the game works.  “Playing golf with a bunch of newborns is a  team sport.”

The  trouble with this scenario is that I’m a Queenslander.  Unlike those Sydney folk, we have enough brains not to play golf with newborns.  We play golf with something else:

Anyway, at least afterwards the girls get to go on a picnic with Richie to celebrate their parenthood.  Richie asks who would like a glass of champagne.

“I’ll have one for each baby,” says Noni, in true Queensland spirit.

And then Osher arrives to tell the girls that the babies have been programmed to give their mothers a happiness rating.  Thank (insert deity of choice) the real things can’t do that.  I’m pretty sure I would have been screwed.

And if anybody looks like they have been screwed over, it’s Kiki.  Despite her North-South-East-West Kardashian text book method, the happiest baby belonged to Nikki, who now gets mummy-daddy time with Richie.  But good on her! Rather than toss the baby aside the minute the challenge is over, Kiki keeps up the ruse, in the vain hope that some equally eligible Bachelor with a mummy fetish will stroll across the Domain and whisk her away.

Nikki, for her part, is the second girl after Olena to be taken to The Bachelor pad. They share a kiss, and her gives her a rose, but no red dress, and she, of all the girls needs a decent cocktail frock.

The trailers have been promising a Nikki bombshell all week.  I have been trying to figure it out:

“Richie, my boyfriend wants me back.”

“Richie, I am Keira’s sister-cousin-aunt.”

“Richie, I am the birth mother of all those computerised babies.”

It’s enough to stop Alex from potentially playing her white rose.  Worse, it’s enough for her to be distracted by Keira et al,  allowing Eliza to swoop in and present him with crushed velvet ribbon symbolising her weirdness.  Hmmm….

But then Alex does play the white rose.  All of a sudden Nikki is the White Queen again. And strangely, yet thankfully, we do not have to endure anymore of that “Rose-nest” banality.

Because it’s Rose Ceremony time! Ten left. But only nine roses! My heart is beating out of my chest!

Poor, hapless, clueless Eliza is gone.  Here’s a few tips.  Don’t make up a crappy love song to sing over and over and over again.  Don’t produce some crumpled bit of ribbon and present it as your love.  And in dressing for a cocktail party, it’s best to come dressed as a Trump wife, and not Hillary Clinton.

Or anything that looks like you’re up for a cult.