No doubt tonight’s episode of MKR will be an absolute ratings bonanza for Channel 7. It’s the “Money Where Your Mouth Is” episode for these six pairings. There’s nothing better than when the couple painted as the nastiest get to answer their critics.  It will be sublime or ridiculous with these two; there is nothing in between. Of course, on the one hand we all want to see Zana fall flat on her rubber-featured face.  But on the other, we really want them to be half decent, because there’s only so much of Cheryl and Matt that anybody can take. For their part, “the odd couple” live in a psychedelic world of delusion; one where someone is going to serve up a cow shit sandwich, which frankly is the only way they are likely to get through.

Speaking of mouths, it is nice to actually hear Gianni speak tonight.  It’s almost a relief to see that he has had some dental work done, because for the first five episodes I thought that Zana had wired his mouth shut to prevent him accidentally complimenting anyone else’s cooking.

Anyhow, the episode begins with the usual excursion to get the groceries, but of course this time it includes a Porsche.  Now I have always been put off by the idea of a Porsche.  This has nothing to do with the price or the pretentiousness. Oh no.  I have just always considered the impracticality of fitting the groceries to cater for a dinner party of twelve into its itty bitty little boot.  If Zana and Gianna can bust this myth, why, I might just rush out and get one.  So, with Zana dressed in her best day black and armed with their Louis Vitton hessian shopping bags, they’re off.

First stop is Coles.  I’m betting that it’s the first time that Zana has ever stepped inside such as store.  After all, this is where the common and unclean go to shop and apparently have unprotected sex amongst the onions, because these present a particular phobia for Zana.

Meanwhile, back at wherever it is that Pete and Manu glance over the menus submitted by the contestants, the chefs pay particular attention to the main course.

“Livers,” croons Manu.  “I love livers…with fava beans and a nice chianti.”  I knew he was too charming to be true.

Well if it’s livers he wants, then livers he will have, because back at the butcher’s, Gianni and Zana have bought about ten kilograms of them.

So here’s the thing about the Porsche food transport myth.  We never actually see Zana and Gianni put any groceries into the car (nor actually take them out of it), but assuming they were on board, and not being carried back to their house on the head of some poor lackey they had hired for the purpose, I don’t reckon it’s up to scratch.  The poor little thing conks out under all the weight of that butter and premium flour and Gianni’s horn gets stuck. Cut to Cheryl, who is dressed as some sort of gypsy flapper, who is laughing like a loon, proof perhaps that she has cast some sort of curse upon the vehicle. Anyway, I can’t see me trading the XV anytime soon.

Zana and Gianni have named their restaurant “Monte Nero.” It’s all very fancy schmancy and you know it must be classy because they have stemless wine glasses.  Well call me uncouth, but I just hope this fad passes, because I am a traditionalist.  And those stemless monstrosities won’t fit in the glass hook on my camping chair (but I sense I am digressing again).

The room is decorated with pictures of the grandparents.  “Without them, we wouldn’t be in this land.”  Thank you very much Nondai and Bobdai, Nonna and Nonna.    Thank you. Very. Bloody. Much.

Finally it’s off to cook.  Zana unrolls her aprons and knives.  Quite frankly, I’m surprised she has any knives left, having driven most of them through the hearts of all of the other contestants. No time to waste admiring one’s reflection in the shiny steel blades though. There’s cooking to be done. Zana stuffs up two lots of puff pastry because her bitch of a nondai didn’t bother passing down any quantities.

But no time to worry about that, because she only has seconds to change from one black dress into another black dress, trowel on a bit of lippy and greet her guests. The effect is pretty impressive.  Jordan is so effusive it sounds like he’s about to turn for her, and Rosie compares her eyeballs to those of animated princesses.  Hmmm, almost the same as what I thought: 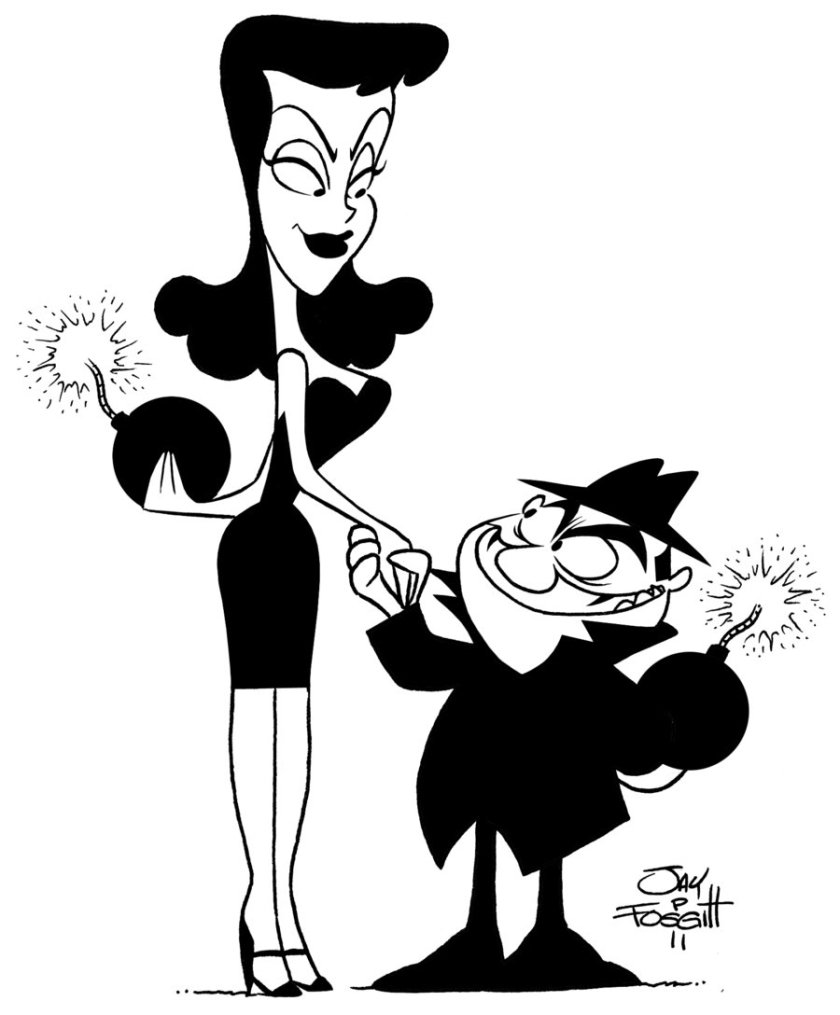 The guests are pretty impressed with the décor as well.

“That’s Gianni and Zana on the table,” observes Cheryl with a half-scowl.  Mental picture of a centrepiece of Gianni and Zana getting all jiggy on the table linens while the photos of Nondai and Bondai look on. Maybe Zana should have spent less time waxing the wine glasses and more time cleaning up their DNA.

In the kitchen, Zana has hardly had time to cut up the pastry with a pair of scissors (a traditional Albanian food prep method, apparently) before the judges arrive.

I swear that guy’s diet gets more bizarre every time. At least fireworks are low carb.

Out at the table, all the contestants are ready for the kill.

“I hope she can put her money where her mouth is,” says Matt with bravado unjustified for a one holding a combined score of 31.  Besides, Matt.  Haven’t you been paying attention to that mouth?  She can put her money there, plus a whole stewed rabbit, a couple of doughnuts and a twelve inch Subway and STILL be able to tell everyone how classy she is.

Entrée is served: Albanian Pita with Beetroot Hummus.  Manu attempts one of those tricks like when Matt Preston smashed to plate on the floor on that other cooking show in front of a bewildered contestant because whatever had been on it was so good it could never again be sampled by a human palate.

“I’m devastated……devastated that I can’t have any more. LOL”.  Sorry, Manu is French.  That should have read “le LOL!”

“Oh stop, Manu.  Stop!” gushes Zana, all of a sudden full of false humility and bawling so much that her tears have eroded canyons into the layers of make-up and spray-on tan.  From their little glassy frame, Nondai and Bondai, beam on with pride.

And even though I still live in hope that someone at the table will choke on a game changing stray false eyelash, and despite the expert critiquing skills of Cheryl (“That garlic is really garlicky”), the game is well and truly over for the cougar and her boy toy.

Back in the kitchen, Zana reminds Gianni about how competitive they are. They lose a lot of friends when they play Monopoly and Uno.  “Oh and darling, remember that time we invited the Smyth-Harington-Joneses around for that game of Cards Against Humanity?  What sore losers they were!”

I don’t think they’re going to have many keepers out of this lot either.

The rest of it is frankly all a bit boring, really.  Zana can cook and cook well.  In fact, in the oven, beetroot can erupt into billowing black smokiness without even infusing into her toasting croutons.  And after two almost flawless dishes, they could replace the hazelnut ganache in the doughnuts with pureed monkey nuts and there is no way they are going to be eliminated.

The jury’s still out on Gianni, however (See what I did there with the legal pun? Lol. Lol. Lol).  His contribution seems to be restricted to breaking the record for the slowest dicing of a capsicum and using a sex toy to inject ganache into a doughnut…sorry…krofne.   It is Albanian, after all. Anyway, let’s see how the love flows once those two hit the MKR kitchen.

More glowing evaluations of the krofne come from the mouths of Pete and Manu.

“Thank you!  Thank you! We’re going to keep learning and growing!” gushes Zana. No mean feat for someone who already knows everything.

It seems an eternity before they all head back to MKRHQ for the least suspenseful elimination ever.  Cheryl and Matt are booted back to Queensland, never to be seen again – until the ad break, when one of those hideous women’s magazines boasts about a spread of Cheryl’s bikini body.  I really could have done without that.

Surprise, surprise.  There’s a few tens and Zana’s completely shocked (no she’s not) and the pair shoot to the top of the leader board. Ho, hum.

But look. Zana is one of the best TV cooking villains you want to have. First and foremost, she is an absolute cow, and for that part of you want her to fall flat on her face.  On the other hand, she can cook, and that’s great too, because she gets to stick around longer so we can enjoy her bitchiness.  And despite her shortcomings in the areas of humility and social graces, she also scores fairly, or at very least consistent with the other teams. Tonight, in her own kitchen, Zana has redeemed herself.

And looming round the corner is MKR’s ultimate villain construct (don’t pretend you haven’t all seen the ads) and it won’t be long before we are going to all be Team Zana.